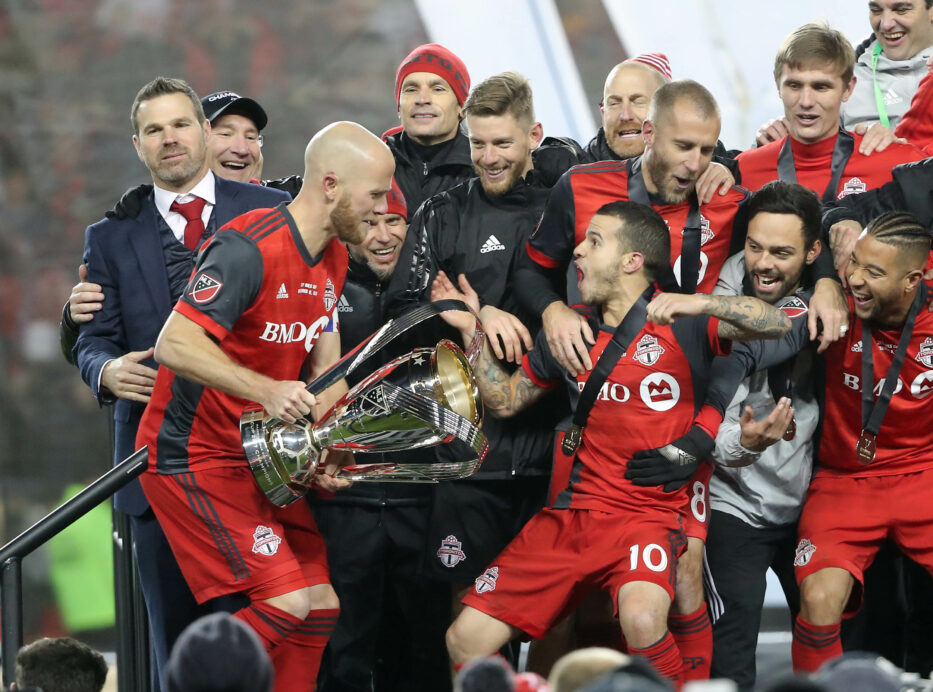 Greg Vanney took a risk on Saturday. It was a calculated risk, sure, but it was a risk nonetheless. After spending the better part of two seasons riding a five-at-the-back set to MLS dominance, Vanney unleashed a major tactical wrinkle with an MLS Cup on the line.

Facing off with a tough Seattle Sounders team, Vanney surprised many when his lineup was announced as a 4-4-2 diamond. It was a dramatic shift from a system that had all but defined TFC’s success for quite some time. But, in every way, the move worked.

From minute one to minute 90, Toronto FC dominated Saturday’s MLS Cup final en route to a 2-0 win. They outshot the Sounders, 22-7. They out-possessed them 57 percent to 43 percent. They dominated duels, corners and passes too.

Vanney’s wrinkle worked, and TFC’s MLS Cup championship came because of it.

“One of our statements this week was be bold,” Vanney said. “Nobody wins anything being afraid, you go out and be bold. The ball kept going, and guys kept attacking. We had them against the ropes and we were able to keep that going in the second half until finally Seba (Giovinco) and Jozy (Altidore) connect for a pretty special goal.

“The important part is that the players came out to play today and the ball moved quick and they found each other and stayed mobile and confident,” he added. “They made it really difficult for Seattle to get close to anything, really.”

The idea to shift to four-at-the-back came for two reasons. First, there was the defensive logic. The Sounders like to work through the middle of the field, Vanney said, and by having a diamond, TFC could clog that area and force them to come up the wings.

They did just that. Joevin Jones repeatedly drifted forward to try to get into the attack, and TFC regularly exploited the space he was leaving in behind. With Michael Bradley dropping in as sort of a third centerback at times, TFC had the numbers back and in good position to make plays.

“What I love about Greg is that he loves it,” Altidore told SBI. “He’s a football-first guy. He likes to prepare his team to play good soccer and control the game. It was a great performance and a great team that he put together.”

On the attacking end, the formation also allowed Giovinco, Altidore and Victor Vazquez to stay a little closer together. That created natural pockets and natural moments of danger, and those were exploited early and often.

From Giovinco’s series of first half shots to Vazquez’s precision passing to Altidore’s run in on goal, the attacking group felt cohesive, connected and, most importantly, dangerous. It took time for that danger to manifest itself in a goal, but it did eventually come.

“Seba and Victor, they’re two players I wish we had in U.S. Soccer, maybe not in terms of physically most imposing but they make the game so easy,” Altidore said. “They find you in the right spots and right moments. It’s a very, very good team with very very good players, and those two kind of make us go, and we’re very lucky to have them.”

“I feel comfortable with them,” Vazquez added. “We feel like we’ve been friends since always. We play every game and control the game, play soccer, play fast and try to score as many goals as we can. Today, we showed again that we were much, much better than Seattle.”

They were better, in a variety of ways. They were quick, faster and more determined. They won a bulk of the 50-50 battles and were deserved winners.

When all is said and done, players win championships. Any coach will tell you that. But Vanney’s tactical adjustments and soccer intelligence was not lost on a group of players that were put in a perfect position to succeed on Saturday night.

“He’s smart,” Sebastian Giovinco told SBI. “We talk a lot. He talks with me, with Jozy, with Michael and tells us to do the best for us. I think he makes part of this win. It was him.”

“Greg’s message to us with going with that lineup and that formation was to be bold, to play with no reservations and take the game to them and open them up,” added Drew Moor. “If there were going to be goals by both teams, that was going to be a good thing for us because we thought we could outscore them. He took everything we learned all season and said to just go be yourself and go be bold. We were certainly that tonight.”