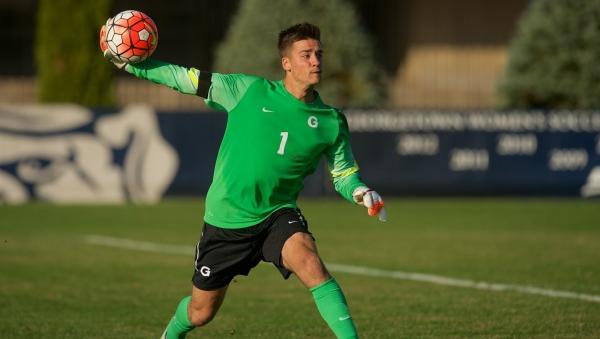 JT Marcinkowski, who is leaving Georgetown after three years, becomes the Black and Blue’s third Homegrown signing in the team’s history, the club announced on Wednesday.

“JT has emerged as one of the brightest goalkeeper prospects in the nation,” Quakes general manager Jesse Fioranelli said in the club’s statement. “We’re excited about his potential as a professional. He is also further proof of the strides that our youth system has made and expect more academy products to follow in his footsteps.”

Marcinkowski, 20, becomes San Jose’s youngest between the sticks, but not by much as the team are heading into preseason with a relatively young core lead by Andrew Tarbell, 24, and Matt Bersano, 25, who spent the majority of the season with USL affiliate Reno 1868 FC.

The Alamo native, who opted against returning to Georgetown for a senior year to sign with San Jose, spent four years in the youth academy and had a spell with the Quakes former PDL affiliate Burlingame Dragons. In addition, he’s been a mainstay with the U.S. Under-20 side, backing up Jonathan Klinsmann in this past summer’s U-20 World Cup.