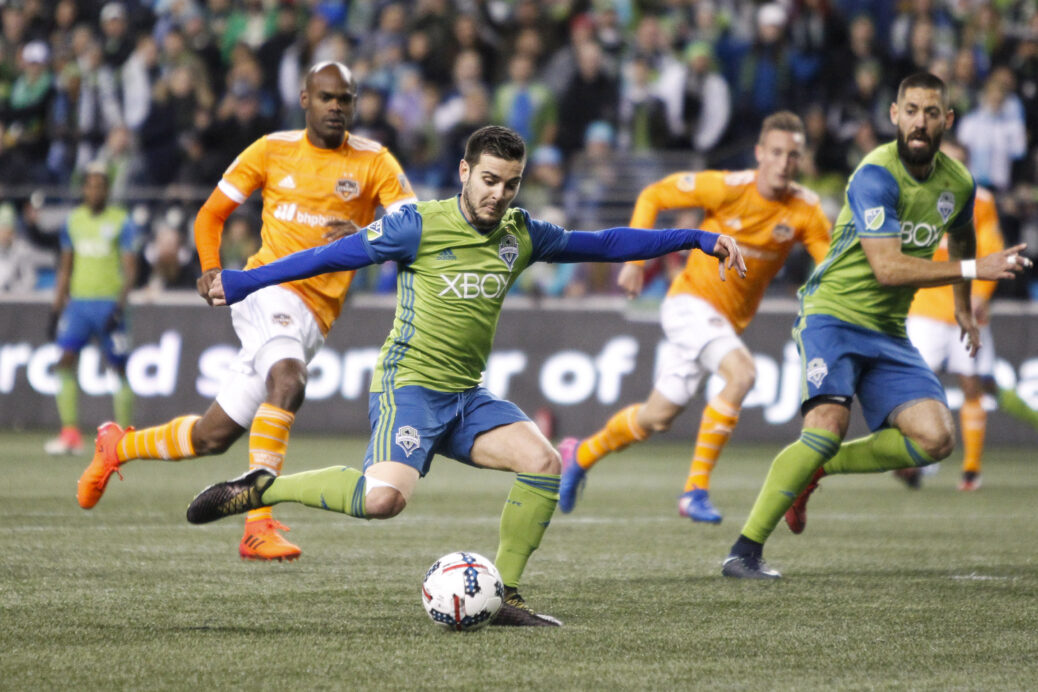 SEATTLE — Talk about peaking at the right time. After a trying, injury-riddled season, the defending champion Seattle Sounders punched their ticket back to MLS Cup with a bravura performance in front of 45,298 at CenturyLink Field on Thursday night.

Entering the second match of the two-legged, aggregate-goal Western Conference finals with a commanding 2-0 lead, the Sounders outplayed the Houston Dynamo from the start, scoring early and often and never looking seriously troubled on their way to a 3-0 (5-0 aggregate) victory.

The Sounders will visit Toronto FC at 4 p.m. ET on Dec. 9 in a rematch of last season’s final.

After a roller-coaster start to the season plagued by both injuries and a championship hangover, the Sounders head to the MLS Cup final with just two losses in a 20-match span dating to July 4. They have not allowed a goal in six games.

Seattle opened the scoring in the 21st minute through midsummer acquisition Victor Rodriguez. The Spanish midfielder worked a beautiful give-and-go with Will Bruin, feeding the former Dynamo striker inside the arc and gathering a one-touch return ball in the heart of the penalty area before deftly chipping goalkeeper Joe Willis at the far post.

Clint Dempsey put the series away in the 57th minute, latching onto a first-time ball from Joevin Jones at the far post and easily besting Willis at the doorstep. Rodriguez initially found Jones streaking alone into the penalty area after the Sounders secured a 50-50 ball at midfield.

Referee Hilario Grajeda then issued a straight red card to Tomas Martinez in the 66th minute after the Argentine pushed Jordy Delem’s head into the turf after the whistle.

The Sounders struck for a third and final time in the 73rd minute, once again hitting the Dynamo on the counter. Second-half substitute Harry Shipp spotted Bruin streaking upfield and fed the striker a perfectly-weighted through ball as he split Houston’s center backs. Bruin then deftly chipped Willis with his first touch for the 3-0 lead.

The Sounders opened the match on the front foot, limiting the Dynamo attack, forcing turnovers in the middle of the park, and creating danger on the counter over the first 15 minutes. Seattle nearly opened the scoring in the 20th minute, but a beautiful cross from Kelvin Leerdam just missed a sliding Dempsey at the edge of the 6-yard box.

After a largely impotent start to the match, the Dynamo did momentarily trouble the Sounders just before halftime. In the 40th minute, Martinez stepped into a loose ball and first-timed a 12-foot shot that goalkeeper Stefan Frei handled comfortably. Just two minutes later, Frei again denied Martinez, making a much more difficult save on a rifled 19-yard shot from the top of the penalty area.

The shorthanded Dynamo — who defied expectations simply by making the playoffs — faced a Herculean task against the defending champions on Thursday night.

A team that managed just one road win all season needed to overcome a two-goal deficit in one of the league’s most daunting venues, a place where they have never won a game, where they have scored just two goals in nine years of visits, and where the Sounders have not lost since the first week of May.

The challenge predictably proved too much. But under talented head coach Wilmer Cabrera the Dynamo’s future looks far brighter at the end of the 2017 campaign than it did in March.

Victor Rodriguez. Cristian Roldan and Nicolas Lodeiro were brilliant throughout, but the Sounders play with a higher IQ when the 28-year-old Spaniard takes the field. His first-half goal all but ensured the Sounders would return to MLS Cup.

Stefan Frei’s 41st minute save preserved the clean sheet and denied the Dynamo any glimmer of hope.

The Dynamo midfield. The visitors attempted a high press, but consistently turned the ball over in dangerous places and repeatedly lost their marks on the counter attack.