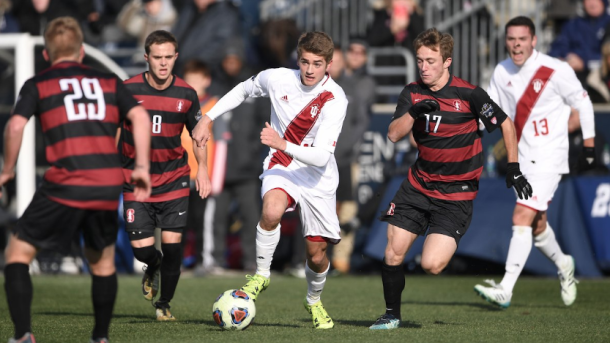 The University of Stanford became the first NCAA school to hold both the men’s and women’s NCAA titles in the same season when they defeated Indiana 1-0 to win their third consecutive College Cup.

Indiana right back Rece Buckmaster provided the first scare of the match, slicing through the Cardinal defense on the wing. However, his cross was could only be flicked wide by midfielder Trevor Swartz.

Hoosiers keeper Trey Muse was also called into action early when he kept out Bryce Marion’s left-footed attempt in the 11th-minute.

Stanford’s Corey Baird was next to test his luck on goal in the 20th-minute, but his shot missed wide to the right. Muse’s second save of the opening half came in after 35 minutes as he grasped Foster Langsdorf’s effort.

Baird also had the first good opportunity of the second half when he headed wide right from inside of the box just after the hour mark.

Five minutes later, Muse made the best save of the afternoon, stoning Baird’s right-footed effort from close-range. The 6’4″ freshman used all of his frame to keep the Stanford midfielder out on a breakaway to keep the deadlock going.

Indiana were not without chances of their own, though. It took the defensive efforts of Mac Hermann Trophy finalist Tomas Hilliard-Arce to keep Indiana off the board in the 84th minute, when he cleared Francesco Moore’s attempt off the line.

After a drab opening 15 minutes of extra time, Werner sprung into action early in the second period.

The redshirt junior rifled home from midrange past Muse for the deciding goal. A loose ball fell to the midfielder, who looped it just high enough over the Indiana keeper to claim his side the title.

“The journey’s been amazing you know with great people,” Stanford head coach Jeremy Gunn said. “We’ve been fortunate enough through our hard work to be celebrating and standing at the end of the season three times.”

The loss was Indiana’s first of the season, snapping a 24 match unbeaten run. Despite the defeat, it was truly a magnificent season for the Hoosiers who knocked off some top competition to get to this point.

“It’s difficult. I think some of our best years, many of them haven’t been able to bring home hardware,” Indiana’s Todd Yeagley said. “I know that our guys will be proud of what they’ve done and know they’ve helped carry on a really special tradition at Indiana. It’s going to take a little while, but I know they will know that at some point.”

As for Stanford, they made history by becoming the first Division I side to win both the Men’s and Women’s Soccer titles in the same year. It’s their third straight National Championship overall.

“This feeling won’t sink in for a while,” Hilliard-Arce said. “At the same time, I’m super excited to see where I can move next and continue my soccer.”