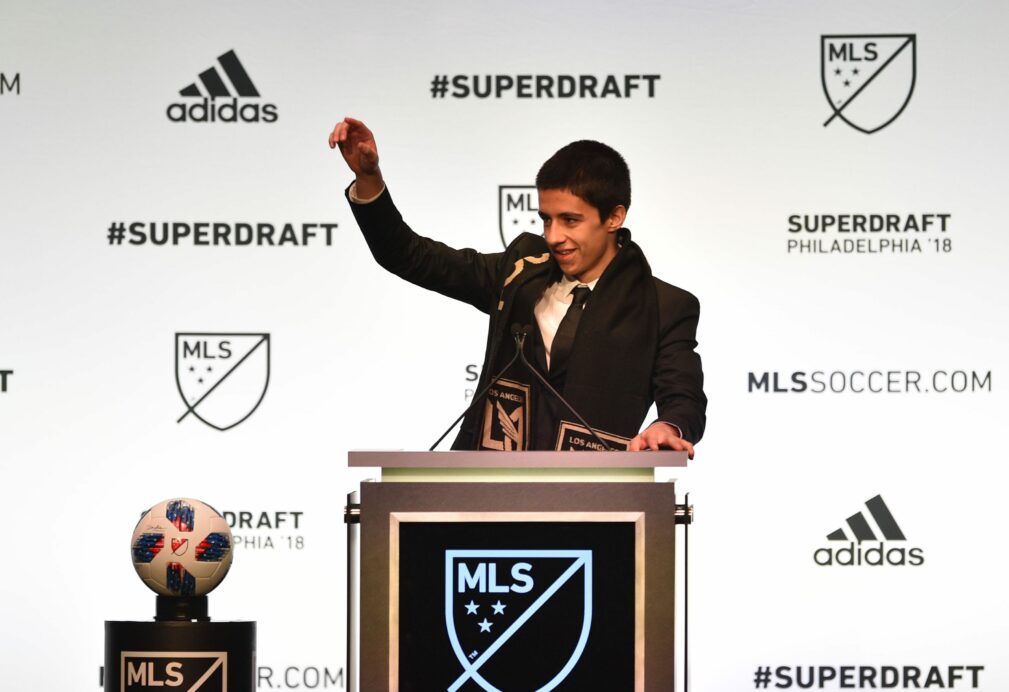 PHILADELPHIA – When Joao Moutinho came to the U.S., he was searching for a fresh start, a new beginning and a clean slate. He found it at the University of Akron, rapidly becoming one of the top prospects in the college game.

On Friday, he joined a team beginning anew as he was selected first overall in the MLS Draft.

With the club’s first-ever MLS Draft pick, Los Angles FC selected the talented defender with the top overall pick on Friday afternoon, adding him to a roster that is rapidly being filled out with promising young talent. For Moutinho, it was the start of a professional dream and, in his eyes, an ideal starting point.

“It’s exactly what I’ve trained for and what I’ve done my whole life, it’s been leading up to this moment,” Moutinho said. “I’m definitely proud.

“I knew I had expectations for myself, but the way it all happened so fast, I had no idea it would happen like this.”

In Moutinho, LAFC gets a versatile player that was widely seen as the most technical defender in the draft. A product of the Sporting Lisbon academy, Moutinho’s soccer education was built around his technical skills and his ability to read the game.

Moutinho says he always saw the U.S. as a “country of opportunity”. He learned English as a kid watching WWE. He followed MLS from afar, citing the league’s growth as one of the reasons he came to the U.S. in the first place.

He’s projected to be able to play a number of positions now that he’s bound for MLS. At Akron, Moutinho featured as a centerback, although he’s viewed as a bit undersized. In MLS, he could very well be a left back as his skillset makes up for his lack of breakneck speed. Defensive midfielder is also a possibility if the 20-year-old defender can bulk up a bit.

“I think he’s a talented young footballer,” LAFC head coach Bob Bradley said. “He’s versatile, reads the game very well. He’s a good passer. He has an ability to come forward with the ball at his feet, draw people, make passes. In all of those ways, you get excited when you see a young player that loves to play and have talent.

“There’s some real great starting points. He’s a good footballer and we can also try to think about what he will look like in a year or two. He’s going to mature. You never know how all of these things play out, but the starting points of the way he plays, the way he moves, his ability to play the right pass, those are all great things.”

Moutinho, meanwhile, is open to anything. The 20-year-old rookie says he’s excited to learn from Bradley, a coach whose experience he feels will help him develop as a young player.

“If he doesn’t want me to play, I won’t, but I’ll be ready for every single game.”

Wherever and whenever he does see the field, Moutinho has already established himself as a key member in LAFC’s early history. He’s the club’s first-ever draft pick, after all, and with that comes pressure to perform and contribute to a team that is still very much building.

LAFC will hope Moutinho can be a building block for years to come but, at the moment, the defender was just captured by a moment that felt like a long time coming and all too fast at the same exact time.

“It’s been crazy. It’s such a rollercoaster of emotions,” Moutinho said. “I’m so ecstatic now and I just can’t wait to start the season.

“It’s awesome, really. I want to go to a club that has the ambition to go all the way. Who else but LAFC?”