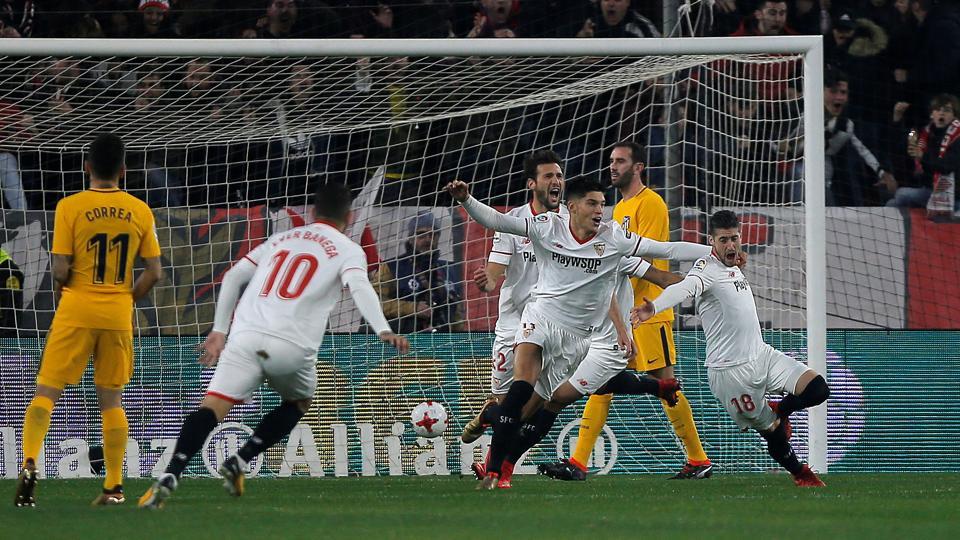 With league action taking a break midweek in most of Europe’s more popular countries, cup action stepped in to fill the void. Sevilla booked their place in the Copa Del Rey semifinals after a 3-1 second leg win over Atletico Madrid on Tuesday. The sides played out an even first-half with both teams getting on the scoresheet. Antoine Griezmann’s right-footed blast canceled out Sergio Escudero’s first-minute opener. Ever Banega’s fourth goal of the season extended Sevilla’s lead three minutes into the second-half, as the Argentine finished from the penalty spot. Pablo Sarabia slammed the door shut on any late drama by slotting home on a fast break. The loss was Atletico’s second in a week in the competition, after dropping the first leg at home. Sevilla made it three wins in a row across league and cup play.

Elsewhere, Manchester City stamped their spot into the English League Cup final, while a London Derby took place at the Emirates. A pair of Serie A fixtures took place on Wednesday, as four teams tried to pick up some insurance points. Real Madrid welcomed Leganes to the Santiago Bernabeu on Wednesday for their second-leg quarterfinal as well.

Here’s a closer look at all of the midweek European action:

Manchester City made it to their second League Cup final in the past three seasons, defeating second-tier Bristol City 5-3 on aggregate. After a valiant fight by the hosts, Pep Guardiola’s side won the second leg 3-2 on Tuesday. Leroy Sane’s opener after 43 minutes gave the EPL leaders a 1-0 advantage. A fast break for City early in the second-half was capped off by Sergio Aguero who finished off Kevin De Bruyne’s assist to the bottom-left corner. Marlon Pack headed in his second goal of the season to give his side some life. Aden Flint’s close-range finish in stoppage time set up a grandstand finish, only to be canceled out two minutes later. De Bruyne’s ninth goal of the season finished off the feat for Manchester City who will be in contention for the League Cup. The loss only continued a horrid January for Bristol, who have lost five of six fixtures in all competitions.

Arsenal will be Manchester City’s opponent at Wembley next month, after a 2-1 London Derby win over Chelsea. Granit Xhaka’s close range finish put the Gunners ahead for good at the hour mark. An own goal off of Blues defender Antonio Rudiger drew the sides level after 12 minutes, when Nacho Monreal’s header deflected off both Marcos Alonso and the German defender. Eden Hazard’s 12th goal of the season was the lone bright spot for Chelsea, who miss out on February’s final.

The biggest upset of the Copa Del Rey so far occurred on Wednesday as Real Madrid fell 2-1 to Leganes. Despite a 1-0 win in their first leg, Los Blancos were eliminated via the away goals tiebreaker at home. A 55th-minute header by Gabriel Pires proved to be the deciding goal in the scoreline. Javier Eraso’s opener came in the 31st-minute had Leganes ahead going into halftime. Karin Benzema’s right-footed effort from a difficult angle had put Madrid through, until Pires scores his sixth goal of the season. The Copa Del Rey exit adds another blemish to an already disappointing season for Real Madrid.

Here’s all of this week’s Copa Del Rey results:

Lazio made it a trio of league victories in a row on Wednesday, rolling past Udinese 3-0. An own-goal by Udinese’s Samir gifted the hosts a 1-0 lead after 22 minutes. Portuguese international Nani extended the lead in the 47th-minute, scoring his third goal for his new club. After setting up Nani for the second goal in the match, Felipe Anderson added the exclamation point with a missile of an effort in the 87th-minute. The Brazilian’s right-footed shot from long range beat Albano Bizzarri to the bottom-right corner for the final touches in the match. The hosts outshot their opponents 7-to-4 remaining in third place with the home triumph. Udinese drop to ninth place after losing their first league match since Nov. 26th.