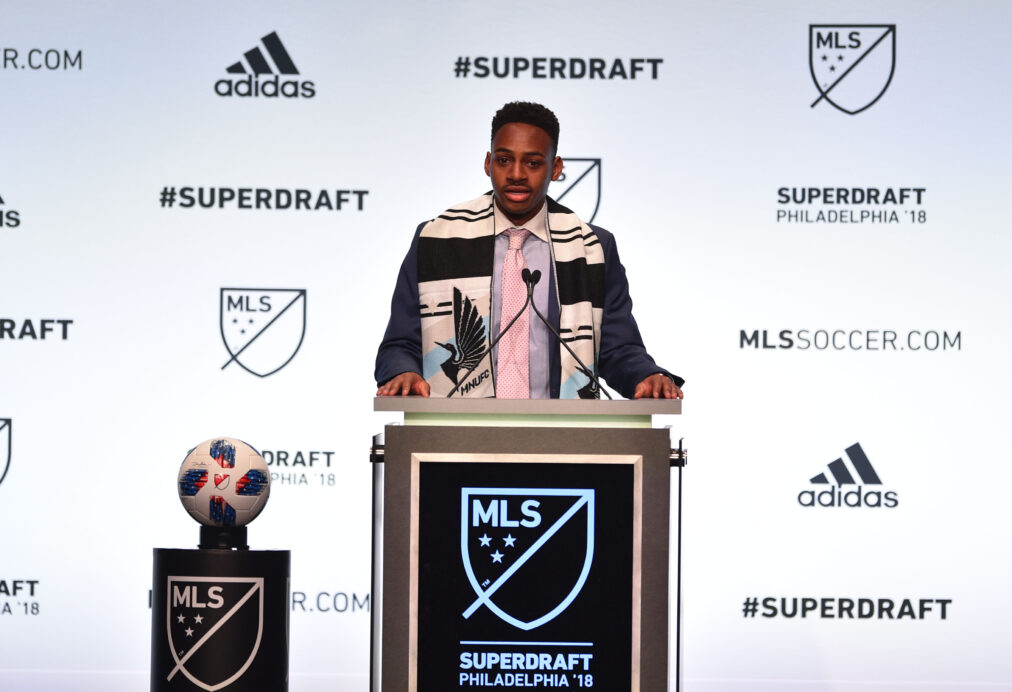 PHILADELPHIA– It’s hard to not get excited if you’re Mason Toye heading up to Minnesota United.

The No. 7 overall pick in Friday’s MLS Draft will get a chance to work with Minnesota United manager Adrian Heath, who has helped develop Cyle Larin and Abu Danladi in his time as an MLS manager.

“I’m extremely excited. I’ve seen what he’s been able to do with forwards and I want to be the next one to come through and do great things in the league,” Toye told SBI.

Although the Generation Adidas player still has work to do to become a complete player in his manager’s eyes, Heath was complimentary of the latest striker he gets to work with.

“I think that with Mason, one of the things when we interviewed him down there, we realized he’s not the finished article, he’s got a lot of work ahead of him,” Heath told SBI. “What we feel with he has, with his physical tools, he’s exceptionally quick, nice feet, he needs to polish his game up in and around the box. He’s got a good goal scoring record, but if we can get him a little better knowing where to run and when to run, then we think we’ve got a good player on our hands.”

With the draft being hours from where he grew in northern New Jersey, Toye was able to make Friday even more special with family alongside him as his name was called by commissioner Don Garber.

“I had my parents and my brother come down with me and I had some cousins in the crowd,” Toye said. “They went pretty crazy. I’m super happy they get to see this. It’s pretty surreal to be here and experience this with them.”

“This is what I’ve wanted to do ever since I was two years old,” Toye added. “Since I knew what professional soccer was,  I knew I wanted to do it. I’m super happy that I’m able to do it this early.”

Toye will get a chance to be a contributor with the Loons in a forward group that includes Danladi and U.S. Men’s National Team member Christian Ramirez. Heath was excited to talk about the potential of the Indiana University product.

“When you look at his age, he’s three years younger than some of the guys in this draft,” Heath said, “We just think he has a lot of potential. The first thing I said when I saw him was “now the hard work starts for him” He’s got to bring it every day and try to get better every day, but we’ve spoke to a lot of people and they really like his personality, they really like honesty and he wants to work hard. We think he has a chance because he has some great tools and we’ve given him the opportunity.”

Toye wasn’t the only player chosen by the Loons on what turned out to be a busy Friday. Minnesota traded down to No.15 originally after the Chicago Fire offered a trade for the No. 5 selection that resulted in them choosing Wake Forest’s Jon Bakero.

The Loons then acquired the No. 7 overall pick from the Montreal Impact to select Toye. The 15th overall pick they received from the Fire was used on Dartmouth defender Wyatt Omsberg.

“(Wyatt’s) obviously a little bit older than Mason,” Heath said. “One of the things that stood out when we interviewed him during the combine was he’s very reassured, a smart boy, he went to Dartmouth so he knows what he’s about and what he’s trying to do.

“We’re looking forward to getting (Wyatt) in. We weren’t sure he was going to be there where we picked him. We thought he had a really good combine and he comes out of the back with it and he’s a little bit deceiving. When you see his times and agility tests, he’s one of the quickest. Coupled with what he see in his size, his physicality and his passing out of the back with his speed we feel as though he can have a future in MLS.”

The trade with Chicago was then completed when goalkeeper Matt Lampson was sent to Minnesota. But the second-year team wasn’t done, as it traded back into the first round to get Duke defender Carter Manley with the No. 23 overall pick held by Toronto FC.

Although the Loons didn’t expect such a busy day, Heath was happy with the return he got and left Philadelphia with a good amount of confidence he the group he acquired on Friday.

“It fell that way. With Chicago, we did the trade to take a player from them,” Heath said. “At the end of the day, we got four players out of the first round so we were delighted with that and we feel as though all three will give us depth in their positions where we were lacking and we think we’ve got three kids with big upside. Potentially we could have for a few years.”