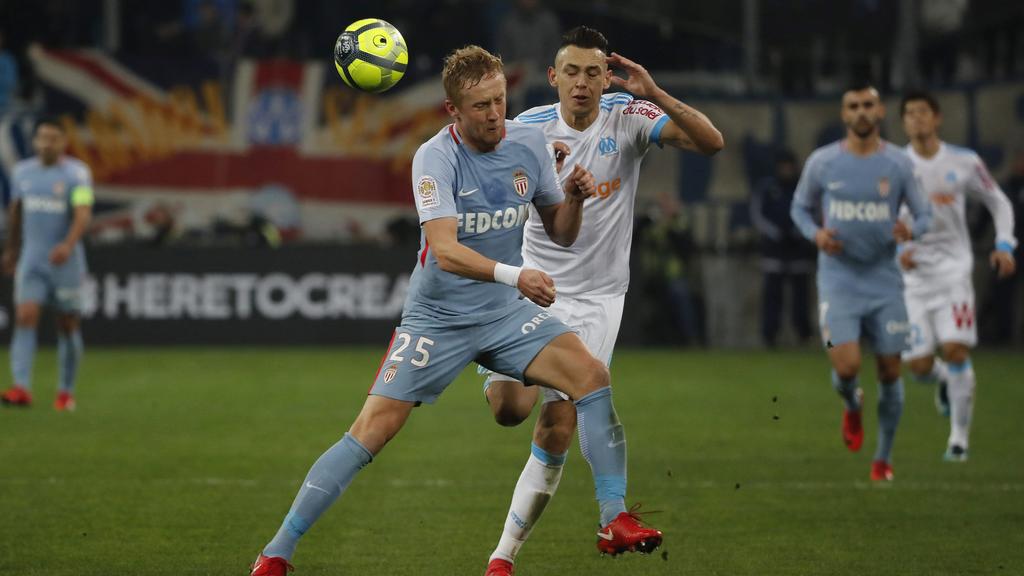 Two top-four sides squared off in France on Sunday, in the match of the round across Ligue 1. Marseille welcomed defending champs Monaco to the Stade Velodrome, sharing the points in a 2-2 draw. The match got off to a cracking start as the sides were level 1-1 after seven minutes. Keita opened things in the fourth-minute as he slotted home his fifth goal of the season, before Adil Rami headed Florian Thauvin’s cross in three minutes later. Valere Germain put Marseille ahead two minutes into the second-half, heading home from a set piece against his former side. Brazilian midfielder Fabinho pulled Monaco level in the 51st-minute, scoring his fourth goal of the season. The hosts had more of the possession, and shots on goal but were unable to earn more than a point at home. Rudi Garcia’s side are in third place following the result, while Monaco are a point behind in fourth place.

Elsewhere in Europe, Chelsea and Man City were in action in respective F.A. Cup ties. Barcelona hosted Alaves in La Liga play, while Atletico Madrid welcomed Las Palmas to town. In Italy, Roma and Sampdoria faced one another for the second time in four days, as Lazio traveled to AC Milan. Bordeaux earned a huge home result in Ligue 1 as they eased past Lyon.

Chelsea advanced to the fifth round of the Emirates F.A. Cup after a convincing 3-0 home win over Newcastle United. Michy Batshuayi had the Blues up by a pair of goals going into halftime, bringing his season total to 10 in all competitions. His first goal came 31 minutes in after the Belgian finished off Marcos Alonso’s assist to the center of the goal. The 24-year-old’s season of the afternoon came in the 44th-minute, as this time he slotted home Eden Hazard’s helper to the bottom-left corner. Alonso netted the goal of the match beating Karl Darlow to the top-right corner from a free-kick in the 72nd-minute. Willy Caballero made six saves in the home clean sheet, as Newcastle lost their second match in a row.

EPL leaders Manchester City made it three straight wins across three different competitions, defeating Cardiff City 2-0 away from home. Kevin De Bruyne’s wonderful free kick after eight minutes opened things for Pep Guardiola’s men. Raheem Sterling made it 19 goals this season in all competitions, as he headed Bernardo Silva’s cross to the top-left corner. Cardiff keeper Neil Etheridge made five saves, but the hosts could not muster much against a stubborn City defense. Cardiff’s Joe Bennett was sent off in the 92nd-minute after picking up a second yellow for a foul on Brahim Diaz. It was Cardiff’s first loss since New Years Day.

Barcelona had to rally back from a first-half deficit to defeat Alaves 2-1 at the Camp Nou on Sunday. Luis Suarez finished from a difficult angle in the 72nd-minute to pull the sides level, after John Guidetti had Alaves in front after 23 minutes. Lionel Messi played the role of hero once again for the Catalan side, scoring from a left-footed free kick after 84 minutes. It was Messi’s 26th goal in all competitions, and his eighth in the month of January. Alaves lost for the second time in league play this month, which drops them into 17th place. Barcelona sit nine points ahead of second-place Atletico Madrid, whom were also winners on Sunday.

Bayer Leverkusen made it back-to-back league wins after a 2-0 victory against Mainz on Sunday. After both teams could not find the back of the net in the first-half, Leon Bailey put the hosts ahead in the 48th-minute. The Jamaican playmaker rifled home from long-range for his eighth league goal of the season. Lucas Alario drew a penalty kick after 67 minutes, and Wendell made no mistake scoring from the spot to double Leverkusen’s advantage. Mainz, who have found scoring hard to come by this season, was held to one shot on goal in their second defeat of the new year. Leverkusen move all the way up to second place after the home clean shutout.

AC Milan earned their most-impressive victory of the Serie A season so far, defeating Lazio 2-1 at the San Siro. Despite being pegged back earlier in the first-half, Milan got their winner from Giacomo Bonaventura in the 44th-minute. The winger got on the end of Davide Calabria’s cross and finished for his fourth goal of the season. Patrick Cutrone’s opener for Milan in the 15th-minute was quickly canceled out by Lazio’s Adam Marusic five minutes later. Sunday’s loss was Lazio’s first since Dec. 11th, but still keeps them third in the league table. Milan sit in seventh, three points back of the final European qualification spot.

In their second meeting in the last four days, Sampdoria got the better of Roma defeating the hosts 1-0 at the Olimpico. Duvan Zapata’s close-range finish in the 80th-minute sealed the points for Sampdoria. Emiliano Viviano also played a huge part in the road win, saving Alessandro Florenzi’s penalty kick in the 39th-minute. Viviano made eight saves in the clean sheet, while Roma’s Alisson made nine in the defeat. Sampdoria are in sixth place after the win, four points back of Roma who are in fifth.

Bordeaux claimed their third league win of the new year, easing past Lyon 3-1 at home. The hosts got a trio of first-half goals which was all they needed to claim the three points. Nicolas De Preville’s left-footed finish in the 22nd-minute made it 1-0 to Bordeaux before Malcom doubled the lead five minutes later from the penalty spot. Marcelo pulled a goal back for Lyon in the 44th-minute but it would the closest the opponents would get. Bordeaux earned another penalty kick, this time in stoppage time which Gaetan Laborde slotted away with little problem. It was the 23-year-old’s second goal of the season, and his eighth in league action over the last two seasons. Sunday’s defeat was Lyon’s first in the league since Nov. 29th, however they remain in second place. Bordeaux are up to ninth with the win.