The Houston Dynamo returned to prominence in 2017, as they shined near the top of the Western Conference for most of the season.

Although last season didn’t end the way they wanted it to, the Dynamo are excited for the new campaign due to the familiarity in the squad.

“At this point last year we were building a team,” Dynamo head coach Wilmer Cabrera told SBI. “This year, it’s 75 percent of the team is the same so we are a little more cohesive and the new guys because there’s not too many of them, it’s easy for them to adapt and integrate themselves into the group. I think it’s an advance, but that doesn’t mean we’re going to play better. It means we have the responsibility to play better and to start stronger so hopefully we can show that.”

The goals may have shifted a bit from qualifying for the postseason to maintaining a spot in the top six of the West, and although the goals have gotten higher, the same game-by-game approach remains.

“Each year is different and brings a new challenge, but at this point what we are looking for is to grow game by game and step by step,” Cabrera said. “The goal is to always qualify for the playoffs and I think that’s the goal for all 23 teams in the playoffs. We haven’t changed our goals so we have to be sure we’re well prepared for the 34 games in front of us and all of them are really important.” 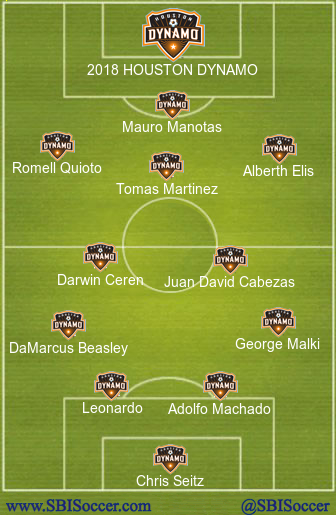 Houston bolstered its defense with the addition of 21-year-old defender Alejandro Fuenmayor, who was one of many Venezuelans to join MLS in the offseason. He will have a chance to learn under experienced center backs Philippe Senderos, Leonardo and Adolfo Machado.

The trio of veterans also provide the young center back with competition each day in practice as the Dynamo look to find the best combination during the 34-game slate.

Pressure is On: Alberth Elis

Erick ‘Cubo’ Torres is gone and the spotlight belongs to Alberth Elis.

The 22-year-old Honduran thrived in his first season in MLS with 10 goals and four assists in 26 games.

With Torres out of the picture, the pressure is on Elis to further develop in front of goal while benefiting from the chemistry with Mauro Manotas and countryman Romell Quioto.

The Dynamo made a few necessary upgrades to add to the core that finished fourth in the West.

Chris Seitz provides some experience in net behind a back four that should provide the Dynamo with a stable backbone as the forwards produce a wealth of scoring opportunities.

How Elis works in the role of main scorer will be interesting to watch, but regardless of who fills the void of Torres’ goals, the team won’t be missing the Mexican forward.

“I think it’s just the normal type of situation in soccer,” Cabrera said. “One guy leaves, another one comes and someone who is in waiting gets the opportunity to play and we move on. We are looking forward with the guys that are here. We are not missing anyone. We are comfortable with the players we have and we are focused on them and players are focused on their jobs.”

Cabrera’s praise of the group as a whole is based off a strong preseason in which everyone is buying into the philosophy Cabrera’s instituted in the club.

“In this team, the quality of Houston Dynamo is not about one player,” Cabrera said. “The quality of Houston Dynamo and emphasis is because we are a humble group working together for the team. We don’t give that responsibility to anyone. We don’t want that responsibility only on one player. If we continue working that way, it’s going to be important for team and the players that they need to be at their best for us to be successful.”

The Dynamo made two nice moves by acquiring Arturo Alvarez from the Chicago and Darwin Ceren from the San Jose Earthquakes.

Both players will add to the productivity of the midfield that features Juan David Cabezas, Eric Alexander and young stars Tomas Martinez and Memo Rodriguez.

The Dynamo will only go as far as the forward trio takes them. Elis, Manotas and Quioto can be one of the most dangerous attacking trios in MLS when they’re at their best, but if their production goes dry, the Dynamo need others to step up.

No matter what position Cabrera focuses on, the key is improvement at every position and in the West standings.

“We need to improve in everything,” Cabrera said. “In order for us to be competitive in the 2018 season, we have to improve in every aspect. We’re talking our defense, our possession, our desire to go on goal and our effectiveness scoring goals. All of that has to be improved if we want to have a successful season.”