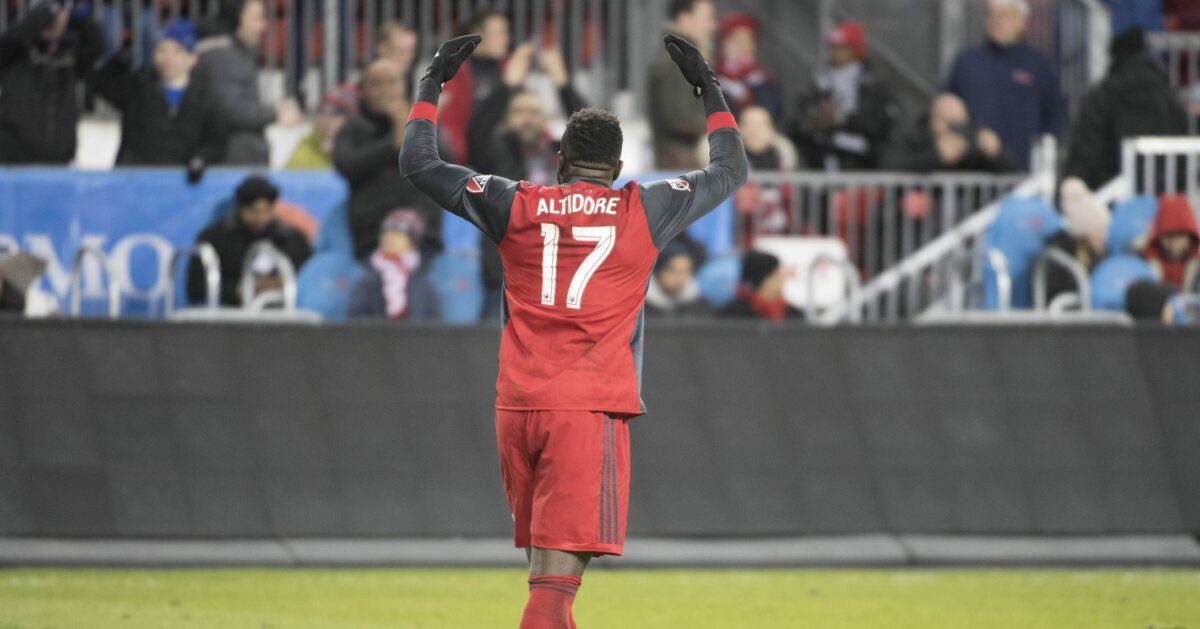 The defending champions are on the board with their first points of the 2018 season.

Jozy Altidore scored twice for Toronto FC as they hold off a late Real Salt Lake rally to win by a 3-1 score in some Friday night MLS action at BMO Field.

Altidore almost started his productive night in the 13th minute when he broke through the RSL line to collect a Sebastian Giovinco feed near the six yard box, but he put his weak shot right into a sliding Nick Rimando.

Less than a minute later, the Reds were handed a golden opportunity to get on the board with their first goal of the year when Altidore won a penalty thanks to Damir Kreilach’s arm getting in the way of his cross. Giovinco’s take from the resulting spot kick was stopped by Rimando and their drought continued.

It finally did come to an end, however. In the 22nd minute, Justen Glad tacked Altidore from behind in the area, leading to another Toronto penalty kick. Altidore stepped to the spot this time and promptly smashed a shot behind Rimando for TFC’s fist MLS goal of the year.

Toronto would keep the pressure high and double their lead through Altidore in the dying seconds before half time. He collected a feed from Ashtone Morgan before smacking the ball into the bottom corner.

RDL would take a while. but they did eventually claw back onto the match. Substitute Corey Baird was able to pull on back in the 82nd minute with a well placed shot from the middle of the penalty area.

It wouldn’t be enough, however. Toisant Rickets put the game away in the second minute of stoppage time for Toronto, giving them a 3-1 win and their first points of the MLS regular season..

TFC will sit out from MLS play until April 14 when they travel to face the Colorado Rapids. They will play a home and home series in the CONCACAF Champions League against Club America between that time. Real Salt Lake, meanwhile, returns to Rio Tinto Stadium next Saturday to take on the Vancouver Whitecaps.

There was nothing Jozy Altidore didn’t do for Toronto FC in this one. He scored twice, won two penalties, and overall ruled the front line for the home side.

Altidore’s second goal turned out to be the winner, and it was an impressive one at that. Sebastian Giovinco started it with a nice feed to Ashtone Morgan, who simply laid off to Altidore for the skilled finish.

Justen Glad had a weak performance in central defense and he conceded the penalty that led to the opening goal thanks to some sloppy defensive work.