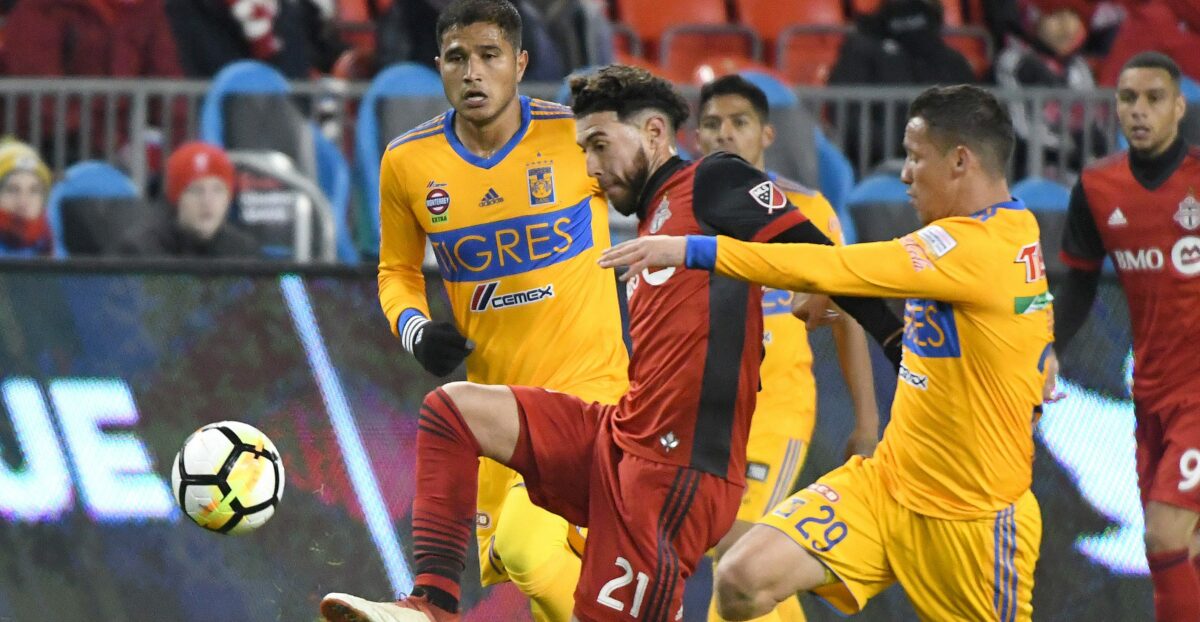 With time winding down and the two teams deadlocked, a stunning finish from Jonathan Osorio pushed TFC past Tigres to open their CONCACAF Champions League quarterfinal series.

After conceding the opening goal to Eduardo Vargas, TFC battled back through a Jozy Altidore finish to level the scoreline at BMO Field. With just minutes left, though, Osorio played the hero, scoring a magnificent backheel finish to seal a 2-1 victory.

Osorio’s goal came in the 89th minute on a ball in from Sebastian Giovinco. The TFC midfielder unleashed a spinning backheel finish, sealing the 2-1 victory and earning a slight edge heading into the second leg, which is set for next Tuesday.

Tigres took the lead through Vargas in the 52nd minute as the Chilean forward took advantage of a bouncing ball atop the box. Vargas took his chance to rifle a shot past Alex Bono on the near post to push the scoreline to 1-0.

It took just eight minutes for TFC to battle back through Altidore. On a well-hit assist from Marky Delgado, Altidore used his strength to hold off his defender before firing a shot to restore the deadlock at one apiece.

The first half was largely a tepid affair as both teams felt each other out. While the two sides battled each other, they also faced difficult field conditions, a relatively expected circumstance of a March match in Toronto.

Early in the second half, Toronto FC came out firing and, just three minutes in, the hosts had a penalty shout when Altidore was battered down in the box. The referee ruled to play on, ending the chance. Moments later, Tigres was on top through Vargas.

Seconds after Tigres’ opener, TFC nearly fired back as Jozy Altidore centered a pass to Jonathan Osorio on the edge of the six-yard box. However, Osorio tapped the shot high in what turned out to be one of the game’s better chances.

When all was said and done, TFC finished with 13 shots to Tigres’ five with five of those 12 going on target.

TFC now looks ahead to this weekend’s clash with the Montreal Impact before facing Tigres in the deciding game next week.

Michael Bradley quietly marshaled the midfield all night long, providing a spark with his passing and his defensive work against a tough Tigres team.

With moments training, TFC looked to be content with a home draw before Osorio scored a golazo to seal a first leg win.

Tigres’ Javier Aquino had a rough game for the Mexican champions, who now have work to do in the second leg.