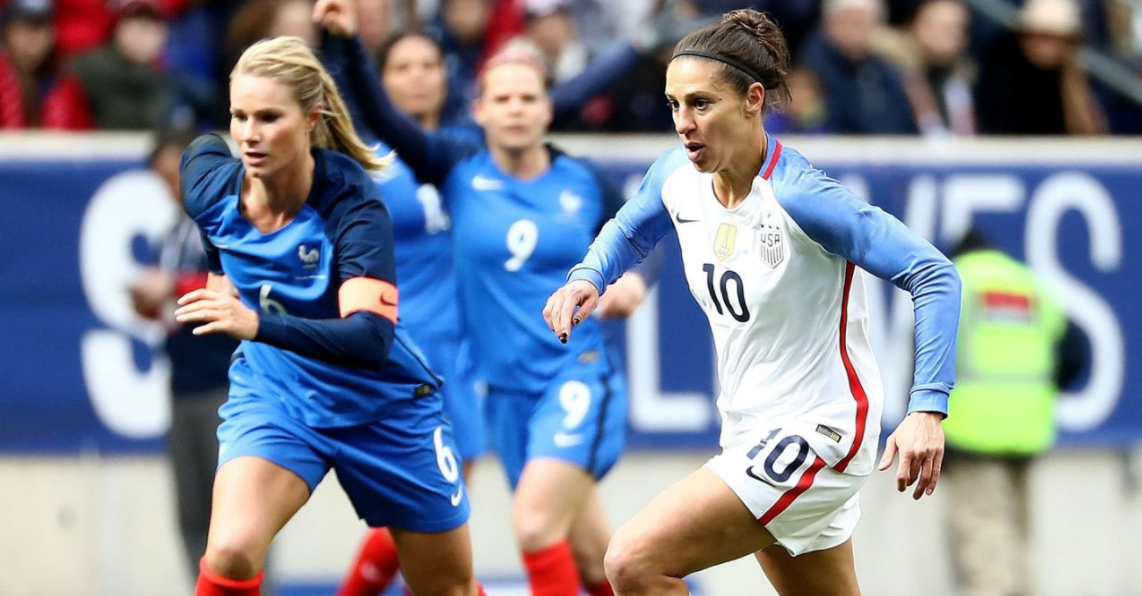 The U.S. Women’s National Team’s undefeated run may be intact, but a three-match winning streak was snapped after a 1-1 draw with France in the SheBelieves Cup.

The team went ahead first with a goal from Mallory Pugh, but a Eugenie Le Sommer tally cancelled out their lead only two minutes after obtaining it. The evenness between the two teams was the story of the first half, with France bouncing back from a tough 4-1 defeat to England earlier in the tournament.

The second half saw plenty of opportunities for the U.S. to eventually grab that game winner, but none of the efforts resulted with the ball in the back of the net.

Here is a closer look at the action of the day:

Jill Ellis had said going into the SheBelieves Cup that finding consistent lineups was one of her missions. The lineup remained almost unchanged from Thursday to Sunday, with only two players being replaced.

While Morgan Brian and Andi Sullivan slotted in for Julie Ertz and Carli Lloyd, respectively, the rest remained intact. Some of this, though, does not come as a huge surprise. Ellis emphasized before the tournament that building chemistry with goalkeeper and Alyssa Naeher was one of her priorities, and that unit has stayed fairly consistent in recent matches, even outside of the SheBelieves Cup. Additionally, when all three of Alex Morgan, Megan Rapinoe, and Pugh are healthy, they remain Ellis’s first choice attacking options.

That being said, the team did not look its freshest as a result. Ellis said the team “ran out of legs” post-match, and led to her using all six of her substitutions. That also made it easier for France to make their way through the usually tough to break down United States during long stretches of the game.

While the U.S. press was incredibly impressive against Germany, it did not look the same against France.

Part of that is down to the lack of rotation. Though Ellis’s side has had some experience playing a pressing game, the quick turnaround clearly did not make that type of play easy to execute. The U.S. pressed as a unit on Thursday from front to back, and on Sunday, that cohesion was missing.

The key changes in midfield may also have played a factor. Playing Brian, who has not had a lot of reps with the team in recent months, and frequent substitute Sullivan meant the team lacked cohesion in key areas on days when some, including those two, underperformed. Though the press worked at times for long periods of the game, it was not as successful as it was against Germany

The USWNT players, individually, were a mirror of their collective performance. There was some brilliance on the field, as was the case with Alex Morgan, Megan Rapinoe, and Alyssa Naeher. Opposingly, there were moments of frustration, which was reflected in the play from the likes of Pugh, Brian, and Sullivan.

It was genuinely an off day for some members of the USWNT. Pugh, a standout performer against Germany, was not firing on all cylinders against France. Sullivan, one of the more exciting young prospects on the U.S. team, had an on-and-off day. Brian is obviously gaining match fitness and trying to get back into form after a tough 2017.

Meanwhile, some members of the USWNT kept up their recent run of good form. Morgan, the captain on the day, was unlucky not to score, and she confined to link up well with Rapinoe, her long-time teammate on the national team. Goalkeeper Naeher is beginning to truly embrace her role as the first choice goalkeeper, commanding her box and coming off her line more comfortably than ever. It was not all bad for the U.S.

One of the more startling moments of the match was when Ellis took off Taylor Smith after 42 minutes. There was no injury involved, though, as the head coach revealed it was an entirely tactical substitution after the match.

Smith has been Ellis’ first choice at right back throughout the three matches of 2018 after frequent rotation with Casey Short, among others, in 2017. The defender had managed to hold her own against the likes of Denmark and Germany, but France provided a tough task for her.

Smith struggled up against Eugenie Le Sommer, who easily made her way past the American throughout the majority of the first half. As was the case last year, the right back position has been one Ellis has yet to settle on, and may be one of her last decisions when it comes to locking a starting lineup heading into World Cup qualifying.

SO DO INJURY WOES

The USWNT entered the SheBelieves Cup without key players in Becky Sauerbrunn, Tobin Heath, Rose Lavelle, and Samantha Mewis, and now they have more on the injury list.

Ellis said that Julie Ertz was unavailable for Sunday’s match after picking up a knock against Germany. Though it is a short-term issue, the team struggled without their first choice defensive midfielder.

To make matters worse, Short had to come off only half an hour after replacing Smith at right back. Short has an ankle issue, and though Ellis said that her injury also does not seem like a long-term issue. That being said, Ellis also noted that she may not be ready for the SheBelieves Cup finale against England.