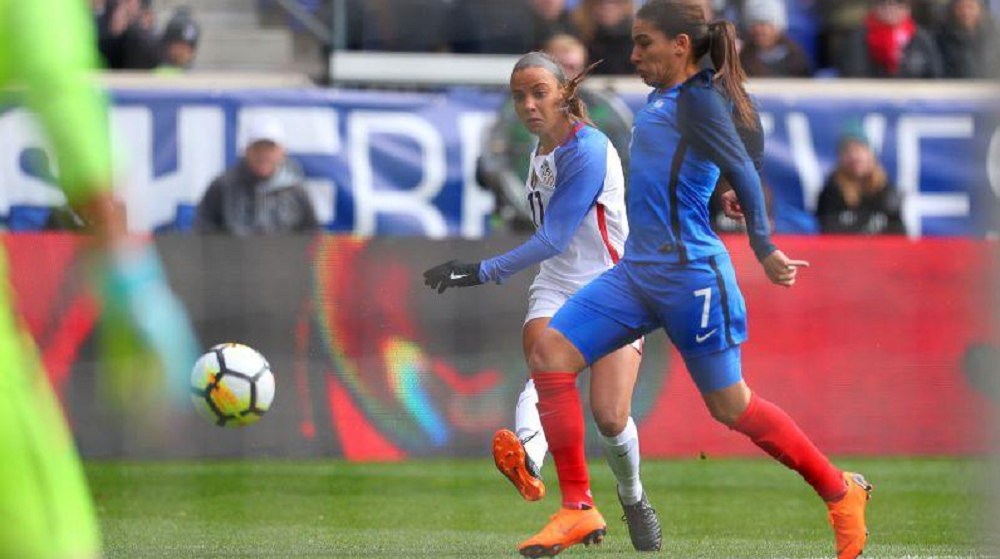 Two quick goals for either side provided the highlights in Sunday’s first SheBelieves Cup match at Red Bull Arena, but meant that the U.S. Women’s National Team were held to a draw against France on Sunday.

The U.S. were on the scoresheet first, thanks to Kelley O’Hara winning a free kick on the left side of the penalty area. Megan Rapinoe’s cross fell in front of a messy goal line, and eventually resulted in a goal from close range for Mallory Pugh in the 35th minute.

France were lively in the moments after conceding, with a Valerie Gauvin shot hitting the top of the crossbar only a minute after Pugh’s strike. The visitors did not have to wait much longer for a goal of their own, as Eugenie Le Sommer grabbed the equalizer in the 38th minute. A long pass managed to find a dashing Le Sommer, who managed to pass Abby Dahlkemper before slotting the ball behind goalkeeper Alyssa Naeher.

The first half score provided an accurate depiction of the first half action. The U.S. press was less impactful than it was against Germany, while France had made a strong rebound after a disappointing 4-1 defeat to England to open up the tournament.

The second half, though, saw several opportunities for the U.S. to grab a winner, particularly in the dying moments of the match. Shots from the likes of Alex Morgan did not find their way in the back of the net, with luck sometimes getting in the way. The match ended the way the first half ended, with a goal for each side

The U.S. were also dealt a blow midway through the second half, as substitute Casey Short had come off with an ankle injury after 75 minutes.

The U.S. currently sit atop the SheBelieves Cup standings with 4 points, though England and Germany are set to play later on Sunday.