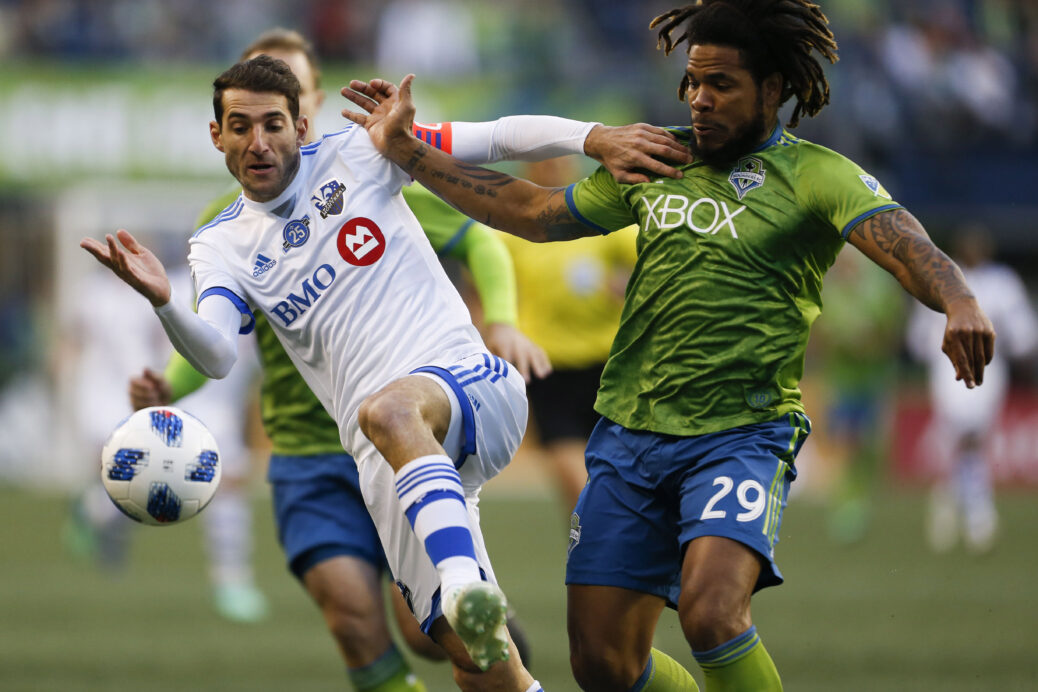 SEATTLE — It was not the prettiest 90 minutes, but the Montreal Impact exploited a red-card advantage and managed to escape the Emerald City on Saturday night with a 1-0 victory over the Seattle Sounders in front of 39,469 at CenturyLink Field.

The Impact (2-2-0, 6 points) opened the scoring in the 60th minute, courtesy of a Waylon Francis turnover, a bit of class from captain Ignacio Piatti, and a simple finish from Jeisson Vargas.

After Francis lost the ball deep in his own territory, Piatti slalomed through the Sounders’ central defense before finding Vargas alone at the edge of the 6-yard box for an easy tap-in and the 1-0 lead. It was the second goal of the young season for the 20-year-old Chilean.

The Sounders went down a man when referee Ismail Elfath issued a 40th-minute red card to Kelvin Leerdam. Leerdam, a 27-year-old fullback in his second season with the Sounders, slapped midfielder Daniel Lovitz as the two tussled after Leerdam was whistled for a foul. Sounders head coach Brian Schmetzer substituted right back Jordan McCrary for midfielder Magnus Wolff Eikrem at halftime.

It was the second straight match the Sounders finished with 10 men. Clint Dempsey was ejected for striking an opponent in the crotch in the club’s 3-0 loss to FC Dallas on March 18.

Despite the lead and the man advantage, the Impact struggled to hold on for the win. The Sounders controlled the second half, and earned multiple clean looks on goal off of free kicks, but rarely challenged goalkeeper Evan Bush.

Will Bruin saw the first chance to equalize in the 68th minute when a softly-cleared ball fell to him just outside the penalty spot, but the striker rifled a shot directly at Bush. In the 74th minute, Gustav Svensson latched onto a Nicolas Lodeiro free kick, but likewise sent a short-range header directly at Bush. Barely two minutes later Chad Marshall headed another Lodeiro free kick off the FieldTurf and just past the far post. In the 84th minute Bush delivered a stellar foot-save on a close-range shot from Lodeiro. Finally, in the early moments of stoppage time Cristian Roldan headed yet another free kick directly to Bush.

Battling injuries and suspensions, the Sounders (0-3-0, 0 points) have lost  their three league matches by a combined score of 5-0, and were also blown out in the second leg of their CONCACAF Champions’ League match against Chivas Guadalajara.

Neither side looked terribly impressive over the course of a first half light on clean looks and excitement. The Sounders ceded the visitors a surprising amount of possession, but the Impact rarely did anything threatening with it. Stefan Frei delivered the save of the night in the 17th minute, leaping to push away a well-taken Vargas free kick.

Looking forward, the Impact visit the New England Revolution on Friday. The Sounders are off until facing Sporting Kansas City on April 15.

Ignacio Piatti. It was not the prettiest game, but the Designated Player did what Designated Players are supposed to do, providing the bit of class when needed. The seemingly evergreen 33-year-old Argentine now has three assists and a goal in just four games this season.

Waylon Francis. Leerdam left his team shorthanded, but the Sounders still managed to outplay the visitors for the remaining 50 minutes. They may well have mustered a draw but for Francis’ turnover.