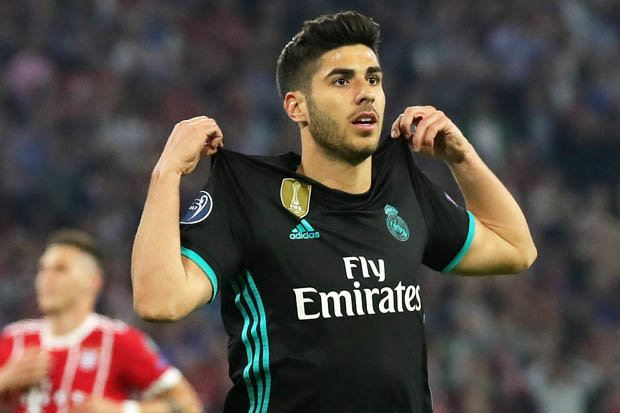 Two of European Soccer’s heavyweights squared off on Wednesday afternoon with the defending UEFA Champions League champs getting an early advantage in the two legged semifinal tie.

Real Madrid fought their way back for a 2-1 first leg win over Bayern Munich at the Allianz Arena. Marco Asensio came off the bench at halftime to grab the winner for Los Blancos, while Marcelo also got on the scoresheet.

Joshua Kimmich opened the scoring for Bayern in the 28th minute, slotting home from the right side of the box. The right back received James Rodriguez’s pass and did the rest, beating Keylor Navas to the center of the goal.

However the score was leveled before halftime with Real Madrid equalizing from a beauty. Marcelo’s long-range left-footed strike beat Sven Ulerich to the bottom-right corner for his fifth goal of the season in all competitions.

Madrid did not need long into the second-half to grab the eventual winner from a fast break. Asensio received Lucas Vasquez’s assist and slotted past Ulreich from the center of the box. It was the Spaniard’s first goal in the competition this season.

Bayern had chances offensively, with Robert Lewandowski having the best of the bunch. The Polish international’s header was saved by Navas on the verge of halftime, while Franck Ribery was also repelled in the second-half.

Ulreich made two saves for Bayern, whom also lost three players to injuries. Arjen Robben, Jerome Boateng, and Javi Martinez were all subbed off in the match which could pose problems for the Bundesliga club in next week’s second leg.

Cristiano Ronaldo was fairly quiet, failing to record a shot on goal in the win. However, Madrid will be favorites to advance while holding the away goal tiebreaker in their return to the Santiago Bernabeu.

The two sides will meet again on May 1st in Madrid for a place in UEFA Champions League Final.