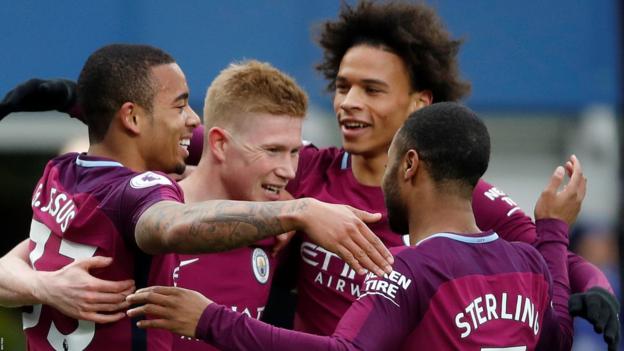 Manchester City has had a rough couple weeks after falling out of the UEFA Champions League and failing to clinch the Premier League title against their biggest rivals. However; the Citizens showed a short memory and got back to winning ways as they defeated Tottenham Hotspur 3-1 at Wembley on Saturday.

A pair of goals in quick succession handed Man City a 2-0 after 25 minutes. Gabriel Jesus opened the scoring in the 22nd minute, before Ilkay Gundogan added to the lead from the penalty spot in the 25th minute. Christian Eriksen cut the lead in half in the 42nd minute as he scored from a rebound. Raheem Sterling slammed the door on any comeback as scored from a rebound in the 72nd minute. The 23-year-old now has 22 goals on the season in all competitions for Pep Guardiola’s squad. City are now a win away from clinching the title, while Spurs remain in fourth.

Elsewhere, Bayern rolled past Gladbach at home while Hoffenheim edged Hamburg. Crystal Palace got a huge three points at home in a six-pointer against Brighton. Atalanta welcomed Inter Milan to town in the Serie A match of the day. Lyon cruised their way to three points in their home Ligue 1 clash with Amiens.

Crystal Palace held for a massive three points in their race for survival, holding off Brighton & Hove Albion 3-2 at Selhurst Park. Wilfried Zaha’s opener came in the fifth minute before James Tomkins doubles the Eagles lead in the 14th minute. Former Eagle Glenn Murray pulled one back for Brighton in the 18th minute, scoring from close range. Zaha doubled his tally from a header in the 24th minute to make it 3-1 Palace. Jose Izquierdo netted the final goal in the match making it 3-2 ahead of halftime. Palace had the edge in chances, outshooting the Seagulls 8-to-3. Roy Hodgson’s side are now to 16th with the home win, while Brighton are in 13th.

Barcelona set a new La Liga record extending their unbeaten run to 39 matches, by defeating Valencia 2-1 at the Camp Nou. Luis Suarez and Samuel Umtiti each netted goals for Barcelona which had them 2-0 up after 51 minutes. Daniel Parejo’s penalty kick in the 87th minute pulled a goal back late for Valencia but that was the closest the visitors would get. Marc Andre ter Stegen made six saves in the home clean sheet, helping Barcelona bounce back from a rough elimination in the UCL. Valencia sit in third but could finish the weekend back in fourth following Real Madrid’s result on Sunday.

Bayern Munich came back from a first-half deficit to roll past Borussia Monchengladbach 5-1 at the Allianz Arena. Sandro Wagner netted a brace for the winners while three other Bayern players scored. Josip Drmic’s left-footed finish in the ninth minute gave Gladbach a 1-0 lead. Wagner snatched the lead for Bayern later in the first-half, scoring from close range in the 37th minute before heading in the go-ahead goal in the 41st minute. Thiago Alcantara extended Bayern’s lead in the 51st minute ahead of David Alaba’s long-range strike in the 67th minute. Robert Lewandowski came off the bench and scored his 35th goal in all competitions this season. Bayern are unbeaten in their last five fixtures, while Gladbach are in eighth.

Hoffenheim grabbed their fourth victory out of their last six matches, defeating Hamburg 2-0 at home. The hosts used a pair of first-half goals to grab all three points. Serge Gnabry opened things in the 18th minute as he slotted in a right-footed effort from the center of the box. Adam Szalai’s fourth goal of the season gave Hoffenheim insurance in the 27th minute. Oliver Baumann made five saves in the home clean sheet for Hoffenheim, which propelled them into fifth place. Hamburg remain eight points from safety as they sit in 17th.

In the must watch match of the day in Serie A, the points were shared between Atalanta and Inter Milan in a scoreless draw. The hosts had the better of the chances, outshooting their opponents 4-to-2 in efforts on goal. Atalanta moved up to eighth place with the point, while Inter missed a chance to jump into the top four. Inter are winless in their last three matches, while Atalanta have drawn their last two.

Lyon cruised their way to another three points in the league, rolling 3-0 past Amiens. The hosts trio of attackers each grabbed a goal as they extended their winning run to four matches. After his four assists a week ago, Memphis Depay continued his production setting up Mariano for Lyon’s opener in the 30th minute. Depay’s right-footed shot in the 83rd minute extended the hosts lead before Bertrand Traore scored his ninth goal of the season in the 85th. Amiens suffered their first loss since March 3rd, and was held to two shots in the loss.