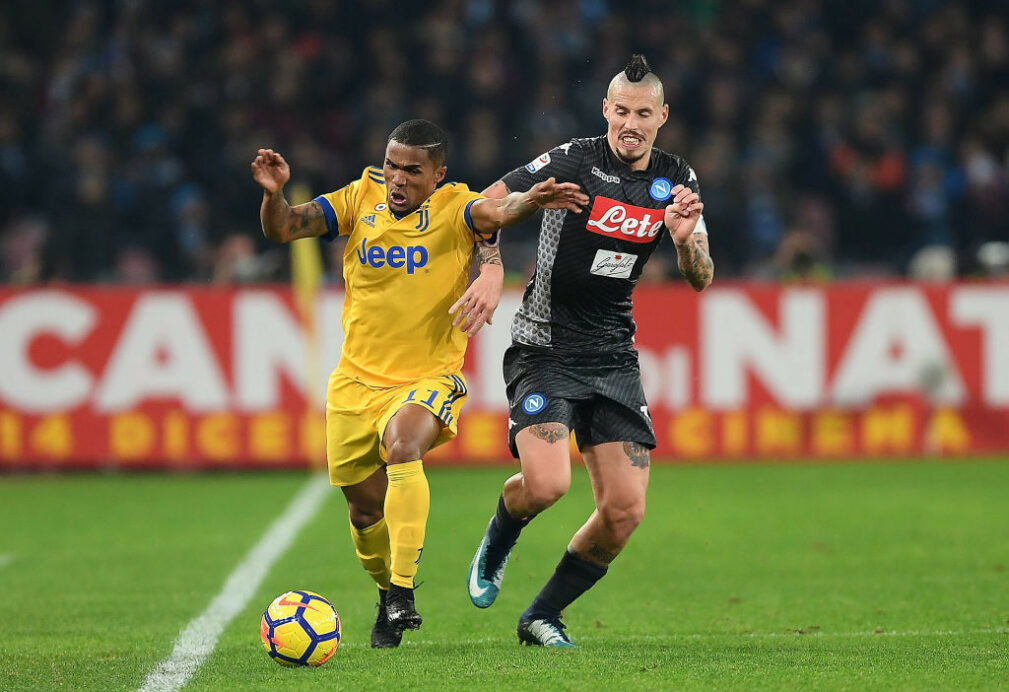 Napoli knew their chances of remaining in the race for the Serie A title would take a big boost if they avoided a defeat at Juventus on Sunday.

Maurizio Sarri’s men used a 90th-minute winner from Kalidou Koulibaly to down the defending champs 1-0 in Turin. Koulibaly rose highest to head in Jose Callejon’s cross for the winner at the Allianz Stadium. The Senegalese defender now has four league goals this season for Napoli, which held Juventus to zero shots on goal in the match. Gianluigi Buffon made three saves in the defeat for Juve, their first in Serie A action since Nov. 19th. The victory now has Napoli sitting only a point behind the Juve in the standings, with three matches remaining.

Elsewhere in Europe, Chelsea booked their place to the F.A. final with a Wembley win over Southampton. Atletico Madrid hosted Real Betis in the La Liga showdown of the day. PSG faced a road trip to Bordeaux in Ligue 1. Atalanta edged Torino in the other top Serie A fixture of the round. In Germany, Koln snatched a point at home in their thrilling draw against Schalke.

Arsenal used a quartet of goals in the second-half to roll past West Ham United 4-1 at the Emirates. Nacho Monreal’s opener in the 51st minute was cancelled out by Marko Arnautovic in the 64th minute. However, Arsenal added a trio of late goals to pull away for the win. Aaron Ramsey’s right-footed shot in the 82nd minute put the Gunners ahead before Alexandre Lacazette netted a brace in a four minute span. The Frenchman now has 15 goals in all competitions this season for Arsenal. Arsene Wenger’s men remain in sixth place while West Ham are down to 15th.

Newcastle United travels to Everton on Monday in the final match of Round 35.

Chelsea will face Manchester United in May’s F.A. Cup final after a 2-0 semifinal win over Southampton at Wembley on Sunday. Both Chelsea strikers got on the scoresheet with Alvaro Morara and Olivier Giroud each bagging goals in the win. Giroud’s opener came in the 46th minute for Chelsea as the Frenchman finished Eden Hazard’s assist from close range.

Morata made a quick impact off of the bench, heading in Cesar Azpilicueta’s cross in two minutes after coming on. Southampton was held to three shots on goal, but eventually could not break the Blues down. The final will take place at Wembley on May 19th.

In the top fixture in La Liga this weekend, the points were shared between Atletico Madrid and Real Betis in a 0-0 draw. Jan Oblak was the busier of the two keepers, making four saves in the clean sheet at home. Atletico, however rested several starters in preparation for this week’s clash with Arsenal in the Europa League.

Antoine Griezmann came off the bench but had little effort in the final scoreline. Betis was held to two shots on goal in the draw, and stays in fifth place. Atletico are four points clear of rivals Real Madrid for second place.

Athletic Bilbao hosts Levante on Monday in the final match of Round 34.

Koln battled back for an important point in their race for Bundesliga survival, tying Schalke 2-2 at RheinEnergieStadion. A right-footed free kick by Marcel Risse salvaged a point for Koln in the 83rd minute, after the hosts fought back for a 2-1 first-half deficit. Leonardo Bittencourt’s right-footed finish in the 26th minute pulled the hosts to within one, after Schalke took advantage early. Breel Embolo’s close-range finish in the fourth minute gave Schalke an early lead before Yevhen Konoplyanka doubled to the lead in the 23rd minute from a fast break. Risse’s wonderful free kick for his first goal of the season now have Koln sitting eight points from safety with three matches remaining. Schalke holds a two point lead over Borussia Dortmund for second place in the table.

Atalanta extended their current unbeaten streak to four matches, with a 2-1 home win over Torino. The hosts had to dig deep and fight for a winner after being pegged back in the second-half. Adem Llajic leveled the score at 1-1 for Torino, canceling out Remo Freuler’s headed in the 53rd minute. Robin Gosens’ left-footed strike in the 64th minute put Atalanta in front for good, as the wingback netted his second goal of the season in all competitions. Torino was held to one shot on goal, losing their first match since March 18th. Torino remains in 10th place while Atalanta are up to sixth.

Genoa hosts Hellas Verona on Monday in the final match of Round 34.

Nice used a second-half winner from Pierre Lees-Melou to grab all three points at home on Sunday in a 1-0 win over Montpellier. After a scoreless first-half, Lees-Melou stole the show rifling home from long-range into the bottom-left corner. It was the Frenchman’s fifth goal of the season, and his first since Feb. 10th. Montpellier was held to two shots on goal, eventually losing their second consecutive match. The visitors are in eighth place following the loss, which Nice are up to fifth.

PSG snatched another three points in Ligue 1 action on Sunday, edging Bordeaux 1-0 away from home. The hosts had the bulk of the offensive chances, outshooting PSG 8-to-2 in shots on goal. However, the visitors were more clinical with their chances as Giovani Lo Celso finished Edinson Cavani’s assist for the lone goal in the 76th minute.

Alphonse Areola was huge for Unai Emery’s team, making eight saves for the clean sheet. Bordeaux remains in 11th place, but look to be safe from any relegation scraps at the bottom of the table. PSG are 17 points clear of second-place Monaco at the other end of the standings.