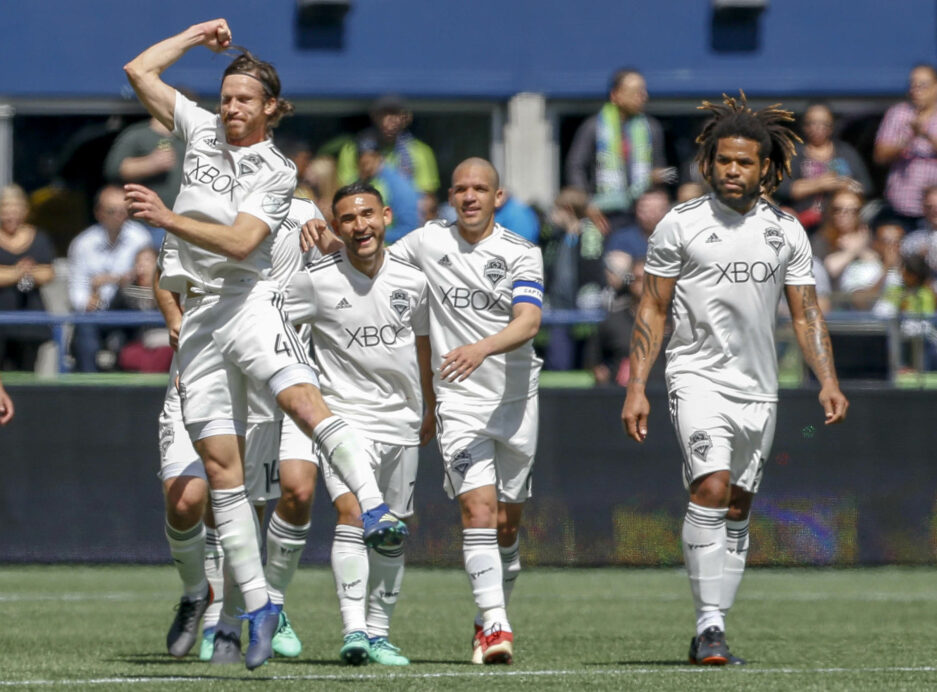 A busy weekend of MLS action concludes on Sunday with a pair of intriguing fixtures on Sunday out west.

The early showdown comes from Seattle as the host Sounders welcome Minnesota United to town. Brian Schmetzer’s team are seeking their first win of the season, following a 2-2 draw at Kansas City a week ago. The Loons are winless in their last three matches, being held scoreless in two of those three.

Fox Sports 1 will televise the evening showdown between the Portland Timbers and NYCFC at Providence Park. The Timbers are seeking to build off of last weekend’s 3-2 home win against Minnesota, despite almost slipping up in the final moments. NYCFC currently lead the Eastern Conference and have yet to lose in 2018. Patrick Vieira’s men drew 2-2 at Atlanta a week ago, but have scored two or more goals in every one of their matches this season.

The SBI team will be providing in-game updates and post-game breakdowns of each game, so follow along throughout what will be an exciting day of action. Also, feel free to share your thoughts and opinions on today’s action in the comments section below:

The reigning Western Conference champions recorded their first win of 2017, riding a pair of first-half goals on the way to a 3-1 win at CenturyLink Field.

Gustav Svensson opened the scoring in the 23rd minute, blasting home from outside of the box. It was the Swede’s first goal of the 2018 season.

Will Bruin extended the lead in the 25th minute, as the forward finished Cristian Roldan’s cross into the bottom-left corner. Bruin now has two goals in as many matches for Seattle.

Minnesota United looks to be trying to pull off another second-half surge, with Christian Ramirez cutting the Loons’ deficit in half with a 66th-minute header off a Darwin Quintero pass to make the score 2-1.

The Loons pushed hard for an equalizer, but the Sounders held on, securing an insurance goal late in the match when Jordy Delem forced a turnover in midfield and raced up field, working a perfect give-and-go with Clint Dempsey before finishing his chance to secure the 3-1 victory.

MAN OF THE MATCH: Cristian Roldan was man of the match, assisting on two of the Sounders three goals in the victory. This comes a week after scoring his first goal of the 2018 season.

MOMENT OF THE MATCH:  The second of Seattle’s two goals in the first-half proved to be very important in the final scoreline. Despite a good fight back from the Loons, Bruin’s goal stood to be the winner.

MATCH TO FORGET: Abu Danladi got the start ahead of Christian Ramirez on Sunday, but Ramirez made much more of an impact in the end. The 22-year-old Danladi failed to do much offensively, and was subbed off in the 52nd minute of the defeat.

After holding on for their first win of the season a week ago, the Portland Timbers had a much easier time this weekend against NYCFC.

Giovanni Savarese’s men rolled their way to three points on Sunday handing the visitors a 3-0 defeat for their first loss of the season.

Sebastian Blanco headed in Portland’s opener in the 26th minute, as the Argentine finished his fourth goal of the season.

Fanendo Adi added the Timbers’ second in the 38th minute, tapping home a rebound after Sean Johnson repelled Diego Valeri’s prior effort. It was the Nigerian’s second goal in as many matches for the Timbers this season.

Larrys Mabiala added an insurance goal for Portland in the 66th minute, as he headed past Johnson to the bottom-right corner.

Jeff Attinella was comfortable, making three saves for his first clean sheet of the season. David Villa was very quiet for NYCFC, being held to one shot on goal in the loss.

The Timbers (2-3-2) are off next weekend, but travel to San Jose for a date with the Earthquakes on May 5th. NYCFC (5-1-2) return home for an April 29th clash with the lone unbeaten team left in MLS, FC Dallas.

MAN OF THE MATCH: Sebastian Blanco scored the first goal of the 3-0 for Portland, continuing his strong campaign. Blanco now has four goals this season for Portland, half of what he tallied all of last season.

MOMENT OF THE MATCH: After taking the lead, Portland continued to press for more and got it not long after. Sean Johnson saved Diego Valeri’s right-footed effort but pushed the save right to Adi, who slotted in Portland’s insurance goal.

MATCH TO FORGET: 29-year-old winger Rodney Wallace failed to make much of an impact. The former Timber man recorded zero shots on goal, and was subbed off in the second-half.