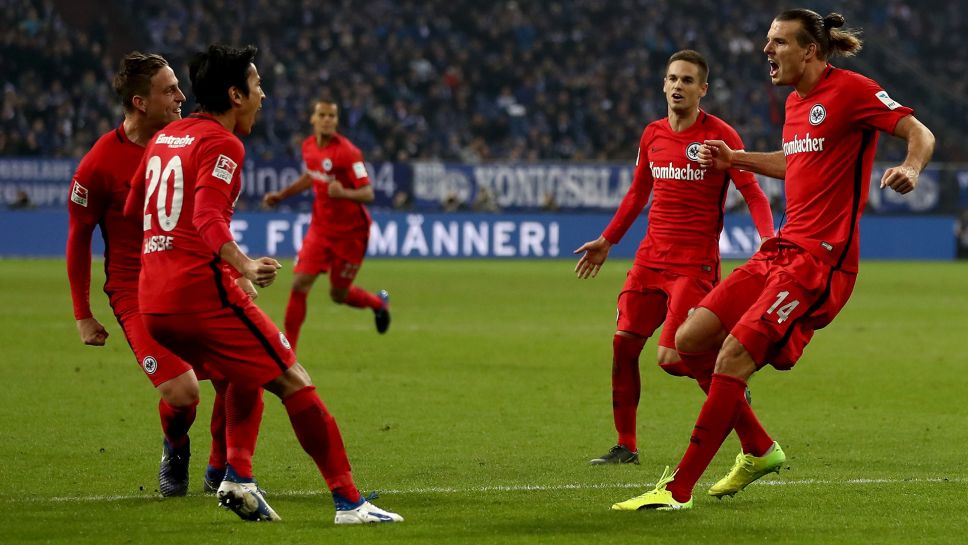 Eintracht Frankfurt haven’t been in the best form in Bundesliga action lately, but Niko Kovac’s answered their critics on Wednesday in the German Cup. The visitors used a 75th-minute finish from Luka Jovic to eliminate Schalke 1-0 in their semifinal clash at Veltins-Arena, and book their spot in the German Cup Final against Bayern Munich. Following a scoreless first-half, Frankfurt got the breakthrough from their star midfielder. Jovic got on the end of Jonathan de Guzman’s cross inside of the box and slotted a right-footed shot into the bottom-right corner for the game winner. It was the Serbian’s ninth goal in all competitions this season, and his fourth in his last five appearances. Despite seeing Gelson Fernandes sent off in the 81st-minute, Frankfurt held on for the victory. Schalke had four shots on goal, but did not look themselves offensively. U.S. internationals Weston McKennie and Timmy Chandler were both on the bench for their respective teams, but not feature.

Elsewhere in Europe, Manchester United got back to winning ways as they traveled to Bournemouth. Napoli climbed back into the Serie A title race with a home victory against Udinese, while Juventus drew Crotone. Real Madrid faced Athletic Bilbao in the final La Liga fixture of the afternoon.

Following their disappointing loss to West Bromwich Albion last weekend, Manchester United got back to winning ways with a 2-0 road triumph at AFC Bournemouth. Jose Mourinho made several changes to his lineup, starting Marcus Rashford and Anthony Martial, and benching Romelu Lukaku. Chris Smalling pounced on a loose ball inside of the box in the 28th-minute to give the Red Devils a 1-0 first half advantage. Lukaku came off the bench in the second-half and doubled United’s lead in the 70th-minute. The Belgian received Paul Pogba’s through ball assist and smashed a left-footed shot into the top-right corner for his 26th goal of the season in all comps. Eddie Howe’s men were held to two shots on goal, eventually losing their second consecutive league match.

Real Madrid had to dig deep for a point on home soil as they drew 1-1 against Athletic Bilbao on Wednesday. Cristiano Ronaldo played the hero for Los Blancos once again as he finished from a rebound inside of the box in the 87th-minute. Ronaldo now has 39 goals in all competitions this season, with 24 coming in league action. Inaki Williams’ right-footed shot in the 14th-minute had Bilbao ahead for most of the match, but they were outshot 10-to-2 overall. Spanish keeper Kepa made nine saves for Bilbao, preserving a precious point at the Santiago Bernabeu. Bilbao are in 13th, while Madrid are in third.

Juventus suffered their first league draw since March 17th, tying Crotone 1-1 at the Ezio Scida. Alex Sandro gave the Old Lady a 1-0 advantage in the 16th minute as he headed Douglas Costa’s cross in from a tight angle. However, the visitors were broken down in the 65th minute as Simy’s right-footed effort beat Wojciech Szczesny to level the score. Alex Cordaz made three saves in the draw for Crotone, which sees them sitting a point from safety in the league table. Juventus are four points ahead of Napoli, but will look at today as a missed opportunity to extend their lead further.

Napoli placed themselves back in the race for the Scudetto after a 4-2 hammering of Udinese at the San Paolo. The hosts battled back before halftime to level the score at 1-1 after Lorenzo Insigne canceled out Jakub Jankto’s strike. Svante Ingelsson’s right-footed strike in the 55th-minute recaptured the lead for Udinese even though they would soon lose it entirely. Raul Albiol’s header in the 64th-minute tied it for Napoli and swung the match in the hosts favor. Arkadiusz Milik’s close-range finish in the 70th-minute gave Napoli a 3-2 lead before Lorenzo Tonelli headed in an insurance goal for Napoli in the 75th-minute. Udinese are down to 14th following their 10th consecutive defeat, while Napoli have won three of their last five.

Here’s all of Wednesday’s Serie A results: