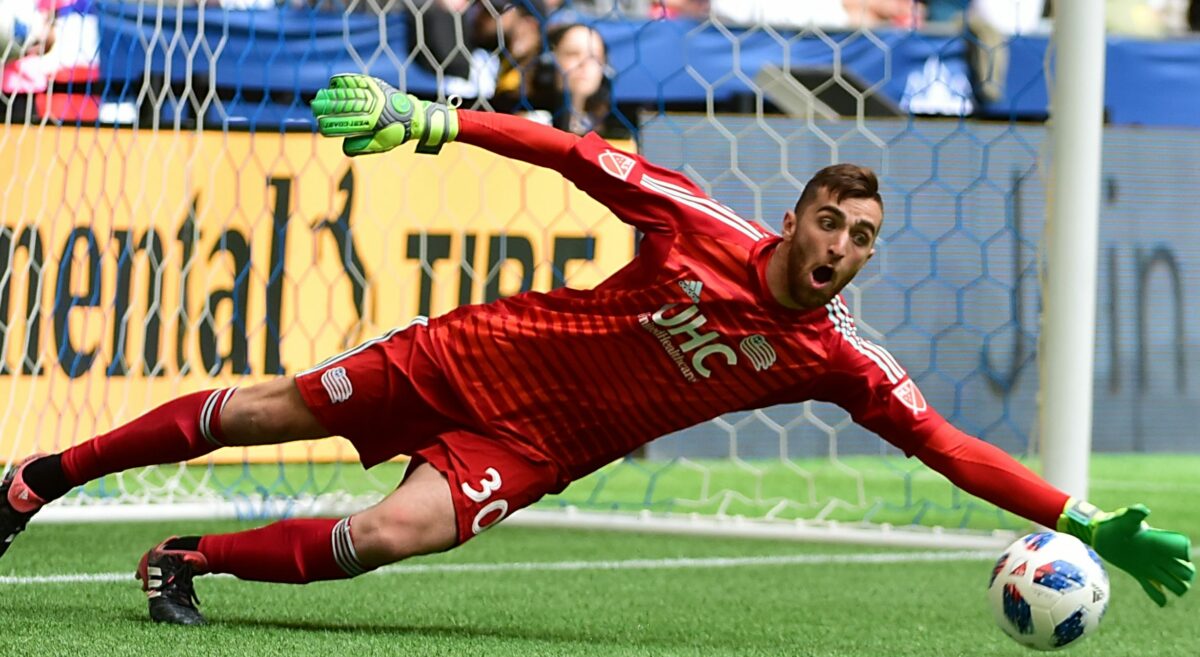 FOXBOROUGH, Mass. — It feels like a distant memory, but less than two months ago the New England Revolution’s Matt Turner was widely believed to be the team’s third-string goalkeeper when coach Brad Friedel made the then-shocking decision to start him in the season opener back on March 3.

The 23-year-old Turner’s meteoric rise since then continued on Wednesday at Gillette Stadium when his sparkling performance prevented what could have been a blowout at the hands of the high-powered Atlanta United offense. After drawing a late penalty kick, the Revs escaped with a 1-1 draw.

As one of the top goalkeepers in United States history, Friedel is well qualified to assess Turner’s performance this year, and the coach was singing his praises, including recommending him for the U.S. Men’s National Team.

“As long as he stays grounded and humble and focused, his potential is really high,” Friedel said. “There’s not too many American goalkeepers that are better than him anywhere in the world.”

With Tim Howard, Nick Rimando and possibly Brad Guzan aging out by the next World Cup cycle, the race is on for the next generation of American goalies to distinguish themselves. It might soon be time to throw Turner’s hat into the ring along with a competitive group of goalies under 30 that includes Bill Hamid, Will Yarbrough, Zack Steffen, Ethan Horvath, Sean Johnson, Jesse Gonzalez, Alex Bono and others.

“He will have the ability to play at National Team level, if and only if, he continues to work the way that he does,” Friedel added.

“That means a lot,” Turner said of his coach’s vote of confidence. “But he still expects more of me and I expect more out of myself. To be in that category right now is great, but I know I can do a lot better. I would have loved that clean sheet tonight. Like I said before, I sort of blame myself for the first goal for moving my feet a little too soon and guessing. I’m still growing every day and trying to learn. It’s cool, but there’s still a long way for me to go before I’m on that level.”

On Saturday, a defensive breakdown allowed Josef Martinez an open look in space by the penalty spot to put Atlanta up, 1-0, in the first half hour, but Turner thwarted Miguel Almiron and Ezequiel Barco on several second half chances to give the Revs the opportunity to tie it up in the final minutes.

“I was really disappointed with how the goal went in the first half. I didn’t do my normal thing. I cheated a little bit and got punished. We came in here down, 1-0, and I felt like I should have done better in that moment,” Turner said. “I challenged myself in the second half to go back out there and make a difference in the game. I think I did a good job of that tonight.”

In the 82nd minute, Barco played a give-and-go with Romario Williams to get in behind the Revolution back line. Turner stoned him from close range, deflecting his shot from the edge of the six-yard box up and off the crossbar, resulting in visibly frustrated reaction from the young Argentine.

Earlier on, Turner denied Almiron on a 57th-minute breakaway and stopped Barco two other times in the box in the 59th and 66th minutes.

“I thought in the first half, on the goal that Atlanta scored, Matt’s such a good goalkeeper that he probably could’ve stayed tall and tried to react to that one as well. That’s just the life of a keeper,” Friedel said. “He made some really good saves in the second half and the one off Barco, I just watched it before I came in here. That’s a top-drawer save.”

The 6-foot-3 Turner is tied with New York City FC’s Johnson for the fifth-best save percentage (71.6%) in MLS and has been inarguably the Revolution’s best player on the defensive side of the ball.

He might be even better than his statistics, though, given that the Revs’ high press system and often shaky back line leaves them vulnerable to giving up quality chances to their opponents on the counterattack.

Turner went undrafted out of Fairfield University in 2016, signed with the Revs on a minimum contract and spent much of his first two professional seasons on loan with the USL’s Richmond Kickers.

“Every two weeks, through preseason, we reevaluated every position… As each two-week cycle went on, Matt Turner’s name kept coming up,” Friedel said. “If I was working something here and I saw a save out of the corner of my eye that looked real good, I’d look over there and it was usually Matt.”

Turner is a late comer to soccer — he played competitively for the first time as a 14-year-old to try to stay in shape for basketball and baseball season — so in spite of his humble beginnings, he might just be on a different development curve than most other players.

The New Jersey native’s late start might have factored into him being continually unheralded along his way to MLS success, but also provided a golden opportunity for the Revs to find a diamond in the rough.

That’s just the mindset Friedel is looking for, and if Turner can sustain his 13-game run of great form, the USMNT may well be in his future someday.