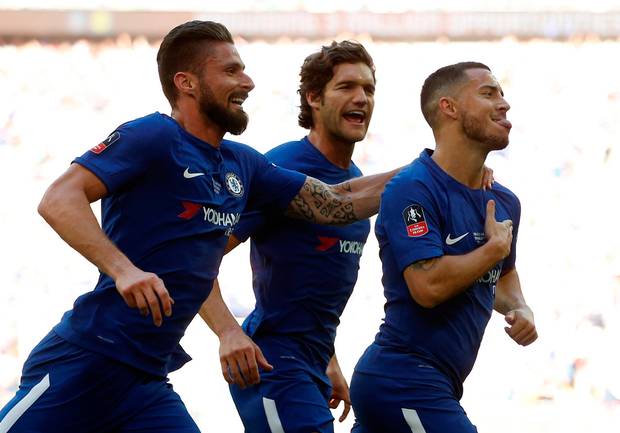 2017-18 may have been a disappointing season for Chelsea in the English Premier League, but Saturday saw some light shine on the London club.

Antonio Conte’s men claimed their first FA Cup crown since 2012 with a 1-0 win over Manchester United at Wembley Stadium. A first-half penalty kick goal by Eden Hazard was all the Blues needed.

The Belgian was bundled over by United defender Phil Jones in the 22nd minute and slotted past David de Gea to give the Blues a lead.

After being quiet in the opening half, United had the better of the chances in the second 45 minutes. Marcus Rashford and Anthony Martial each had efforts saved by Thibaut Courtois, who made five saves in the win.

Marcos Alonso had a good chance to add to the lead for Chelsea, but was stoned by de Gea from point blank range.

United outpossessed Chelsea, 66%-34%, but was unable to really trouble Courtois in front of goal. This was United’s second consecutive defeat to Chelsea in the FA Cup after being eliminated by the Blues in last season’s quarterfinals.

Chelsea ended the season on a high after falling 3-0 to Newcastle last weekend in their final league fixture.