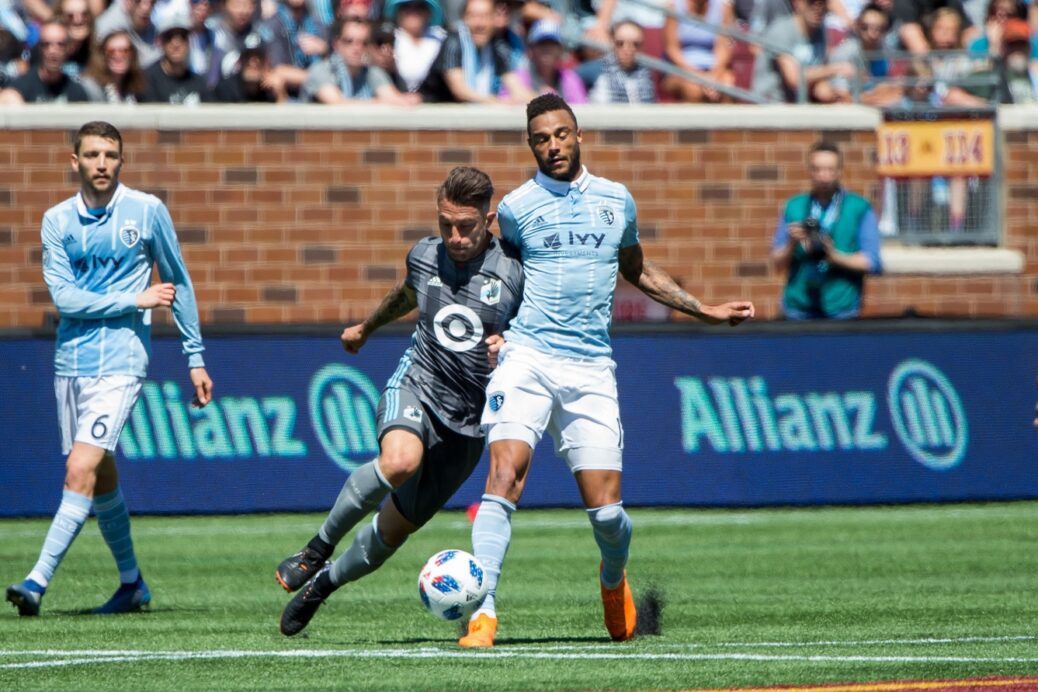 Defending is one area for Minnesota United this season where they maybe have not put it all together. With Western Conference scoring leaders Sporting KC making the trip to TFC Bank Stadium on Sunday, you would’ve figured that trend for the Loons would’ve continued.

However, determined defending paired with a strong outing from goalkeeper Bobby Shuttleworth helped the Loons to their first draw of the season as they held KC to a 1-1 draw. After being caught out early as Khiry Shelton headed past Shuttlesworth in the eighth minute, the Loons responded as Darwin Quintero slotted in from a rebound in the 20th.

For the final 70+ minutes, the backline stood strong and finished out the job in handing Sporting their third draw of the campaign. Head coach Adrian Heath believed the team weathered the early storm well and was happy to get something against the top team in the West.

“Overall, I thought we had a good chance in the game to get more,” Heath said. “We weathered the first 10-15 minutes pretty well and then got back into the game through the counter attack. The first half we did well, but the second half we rode our luck a little. I thought maybe we could’ve got something near the end, but they definitely looked the more likely to get the winner.”

In his third consecutive start, Eric Miller did well at left back while centerback Francisco Calvo shook off a rocky start after being beat by Shelton on the opener. Johnny Russell’s cross came in with pace and Shelton got the better of Calvo to head past the Loons keeper.

Shuttleworth made eight saves on the afternoon with some heroic defending from his backline coming to the rescue in the final minutes. Heath praised the determination by his defenders for getting the job done against a deadly KC attack.

“There was real determination by our goals to keep them out at the end,” Heath said. “Bobby made some important saves when he had to which helped, so overall I’m happy with the point.”

The draw snapped Minnesota’s two-match losing streak and moved them to 3-2-1 at home this season. After a few defeats in a row, morale is one aspect which Heath feels will benefit from this point at home. With Montreal coming into TCF Bank Stadium next weekend, he believes he will see a better picture of where the team is in the long-run following that performance.

“Morale has been good and I think will continue to improve,” Heath said. “We have another home game to come and I think after that result we will see where we are and give us a fair reflection of what needs to be done long-term.”

One concern Heath has for the team is their ability to remain fit and injury free with the summer months approaching. Rasmus Schuller left the match with a knock to the head, while Jerome Thiesson was playing through an injury as well. Abu Danladi made his first appearance since April 22 which is a huge boost, but still Heath hopes that his players can remain on the pitch.

“My main worry is we’re getting a little stretched with matches,” Heath said. “We’re having to bring some guys into the squad who haven’t played much football and it’s a tall order to ask someone to replicate what they do in practice to a match. We’ll see where we are this week, but its a concern of mine that I hope gets better.”