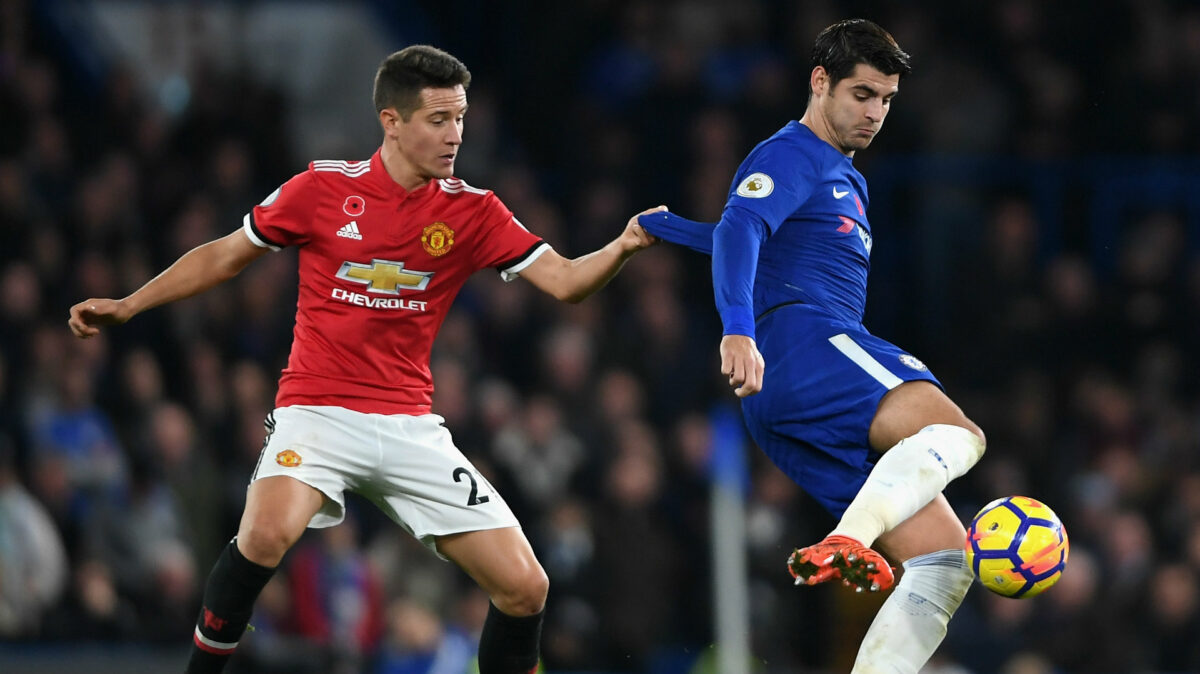 Both Manchester United and Chelsea would consider this season below their usual standards, failing to lift the league crown or advancing far in Europe. However, the English Premier League sides will play for the oldest trophy in World Football as they square off at Wembley on Saturday for the F.A. Cup.

Chelsea concluded the EPL season in dismal fashion, being shutout in a 3-0 loss to Newcastle United. The defeat meant the Blues finished outside of the top four for the first time since 2015/16.

Manchester United finished a distant second in the league race this season, falling to city rivals Manchester City. Jose Mourinho’s side concluded its campaign with a 1-0 win over Watford last Sunday. Romelu Lukaku leads the Red Devils with five goals in the competition, but has yet to be named in the squad after missing out on Manchester United’s last match.

Elsewhere this weekend, Lazio faces Inter Milan in the must watch match in Italy. Bayern Munich and Eintracht Frankfurt will square off for the German Cup on Saturday. PSG faces a trip to Caen to close out their Ligue 1 season, while Villarreal hosts Real Madrid in La Liga action.

Here’s all of this weekend’s European fixtures:

Villarreal will look to hang onto fifth place in La Liga as they welcome Real Madrid to El Madrigal on the final day. The hosts are currently ahead of Real Betis on goal difference, and know a win at home would see them clinch their spot. Villarreal defeated Deportivo 4-2 away from home last weekend, using a brace from attacking midfielder Samu Castillejo. The 23-year-old currently has five goals and six assists this season in all comps. Los Blancos could finish the season as runners-up if they defeat Villarreal and Atletico lose to Eibar. Real are in preparation for their Champions League final date with Liverpool on May 26th, and will hope for no injuries in this fixture. A 6-0 rout of Celta Vigo last weekend saw Gareth Bale (15 goals) lead the way with a brace.

Barcelona closes out their La Liga winning campaign as they host Real Sociedad at the Camp Nou. Ernesto Valverde’s men fell 5-4 last weekend to Levante with Lionel Messi missing the match. Philippe Coutinho led the way with a hat trick in the Argentine’s absence, but it wasn’t enough in the end. Sociedad are in 10th place but could finish the weekend as high as eighth pending other results. A 3-2 home victory over Leganes last weekend saw three different players get on the scoresheet. The strike partnership of Willian Jose and Mikel Oyarzabal have combined for 27 goals this season, two more than Luis Suarez has himself in total.

Here is all of this weekend’s La Liga fixtures:

Bayern Munich are seeking their 19th German Cup on Saturday as they face off with Eintracht Frankfurt in Berlin. The Bundesliga winners rolled past Bayer Leverkusen 6-2 in the semifinal round, using a hat trick from Thomas Muller and a brace from Robert Lewandowski. The duo has combined for nine goals in the competition so far. Frankfurt are seeking their first German Cup since 1988 after beating Bochum 1-0 in the final. A 1-0 victory over Schalke in the semifinals guaranteed Niko Kovac’s side to a spot in the final against Bayern. French striker Sebastian Haller leads Frankfurt with four goals in four appearances in this year’s competition.

A pair of top-five sides will end the season against one another with Lazio hosting Inter Milan at the Olimpico. Lazio, who are in fourth, have drawn their last two matches against Atalanta and Crotone respectively. Ciro Immobile leads the team with 29 league goals and is leading the Golden Boot category by a goal over Inter’s Mauro Icardi. Inter are in fifth place but will need a dominant win over Lazio if they want to finish in the top four. A 2-1 loss to Sassuolo last weekend ultimately doomed Inter to a fifth place finish this season. Icardi has 28 goals this season for Inter, while Ivan Perisic has been a nice supplement with 11.

Here is all of this weekend’s Serie A fixtures:

Marseille will look to end their season on a high as they face Amiens at the Velodrome in their season finale. Rudi Garcia’s men fell 3-0 to Atletico Madrid in Wednesday’s Europa League final in Lyon, and are in fourth place in Ligue 1. Florian Thauvin leads the team with 22 league goals and 11 assists this season. Amiens are in 12th place and are unbeaten in their last four fixtures in league play. Gael Kakuta leads the team with six goals and six assists this season, but only has one goal in his last four appearances.

Ligue 1 champs PSG will look to end their season with a win as they travel to Caen. Unai Emery’s final game in charge will hope to be a winning one following a 2-0 loss to Rennes last weekend at home. Edinson Cavani leads the team with 28 goals this season and will surely wrap up his second consecutive Golden Boot. Caen sits three points clear of the bottom three, and will certainly hope for a point to remain safe. Their last win came on March 4th in a 2-0 success over Strasbourg. Ivan Santini leads the team with 11 goals.

Here is all of this weekend’s Ligue 1 fixtures: