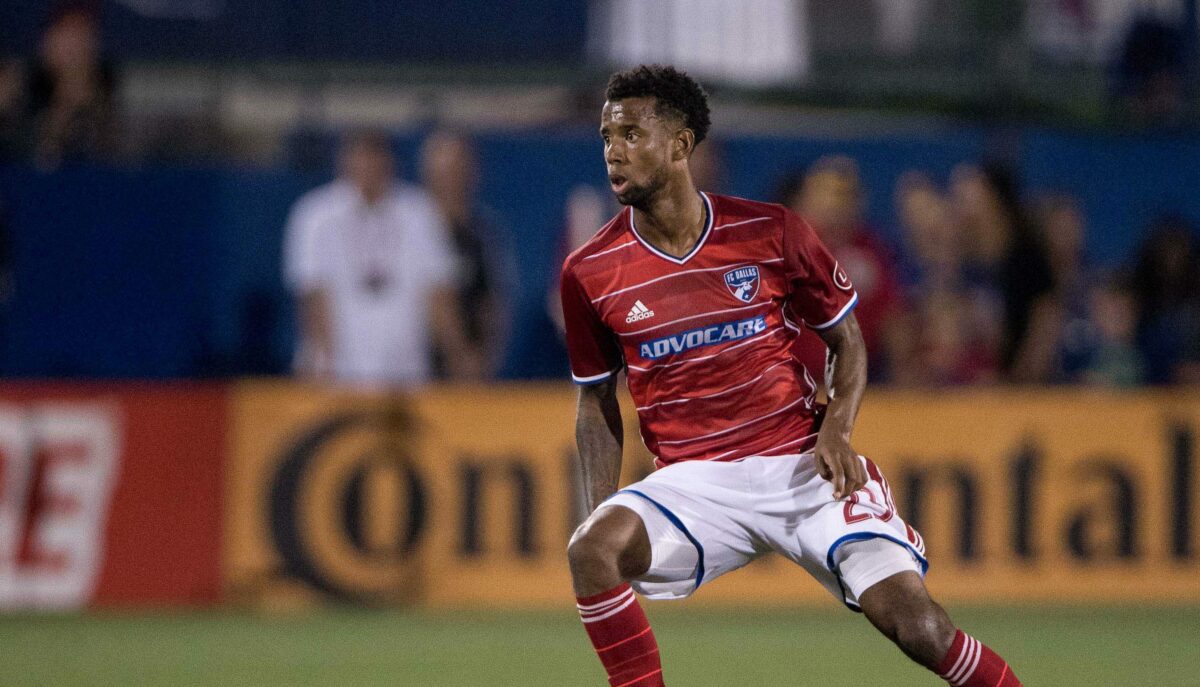 FC Dallas may hay lost for the first time this season this past Sunday, but there were still positive developments for the club in the defeat.

One of them was on the bench.

Kellyn Acosta was healthy and in uniform for FC Dallas for the first time in 2018 in Sunday’s 3-1 loss to New York City FC at Yankee Stadium. Acosta had missed all of his team’s previous matches because of a hernia injury that required surgery before the season began, but he showed enough in training last week to earn a place in FC Dallas’ gameday roster.

The 22-year-old central midfielder did not feature in the contest, which snapped the Western Conference side’s undefeated start to the season, but just being a substitute option after dealing with the physically and mentally grueling recovery process was a welcome step in his road to recovery.

“It’s been very tough. Emotionally, too,” Acosta told SBI. “I missed the national team camp, I missed the (CONCACAF) Champions League, I missed the first six games of the league. It’s definitely been tough but that’s just how the game goes.

“Sometimes there’s bright points and all of a sudden it’s a little bit darker. Mentally this made me a little bit stronger. Physically, I’m getting back at it. I’ll be stronger than ever. That’s my focus and my main goal.”

Acosta felt the hernia problem very early in the year and went under the knife to correct the issue in February. but his health issues began long before. The U.S. Men’s National Team player had been dealing with persistent groin strains during the past two years, and they would only temporarily go away before resurfacing and creating more discomfort.

The pain in his groin did more than just linger, too. It began to spread and affect other areas of his body, including his lower abdomen, forcing Acosta to make the decision to have a procedure done in Philadelphia on Feb. 22.

“I tried to see if I could continue playing,” said Acosta. “Maybe it was something that could have waited until the offseason, but I was at the point where I couldn’t do it. I knew for me to have a successful career I needed something right away before I have any further damage. Obviously it sucks going through a surgery, but that’s something that’s just part of it.”

Now back to full health, Acosta is hoping to break back into FC Dallas’ lineup as soon as in this Saturday’s big road game vs. Los Angeles FC. The talented youngster should have the chance to at least see some minutes off the bench against the expansion club, especially since he was in the 18-man roster this past weekend for a showdown against one of MLS’s elite clubs.

“Kellyn’s good. He’s been working good,” said FC Dallas head coach Oscar Pareja. “He was an option for us on the bench (on Sunday), and it’s good to have a player of his caliber. He’s close. We expect him to be ready because we certainly need him.”

While Acosta admittedly is focusing on trying to get back on the field for FC Dallas as quickly as possibly, he is also hoping to get back into the national team picture sooner rather than later. Acosta missed the March friendly against Paraguay that the U.S. prevailed, 1-0, in, and thus missed out on an opportunity to make a statement for himself.

With the likes of Tyler Adams, Weston McKennie, and Marky Delgado among the players that are competing for starting spots in a crowded pool of central midfielders, Acosta understands just how important it is to be a part of each and every international camp. It was tough for him to have to sit out the one in March because he was recovering from injury, but Acosta is focused on the future and hoping that he can get enough club games under his belt, and show enough in them, in the coming weeks to earn a call-up for this summer’s camp.

“Each and every game I want to be a part of,” said Acosta. “Obviously that’s coming up soon, Ireland and France and Bolivia, so three big games coming up. For me, I want to put my name on that list to be competing in those games, but I have to do well here with FC Dallas first before I can jump straight into the national team.”

With a clean bill of health, Acosta is poised to complete his return from injury in the near future. He is eager for the opportunity to get back on the field, too, and just might get the chance he is looking for this weekend.

“I’ve been feeling good. I’m inching closer and closer,” said Acosta. “Each and every day I’m feeling better and better. Now, my idea is to get some time. It all bodes on just each day getting better and progressing.”