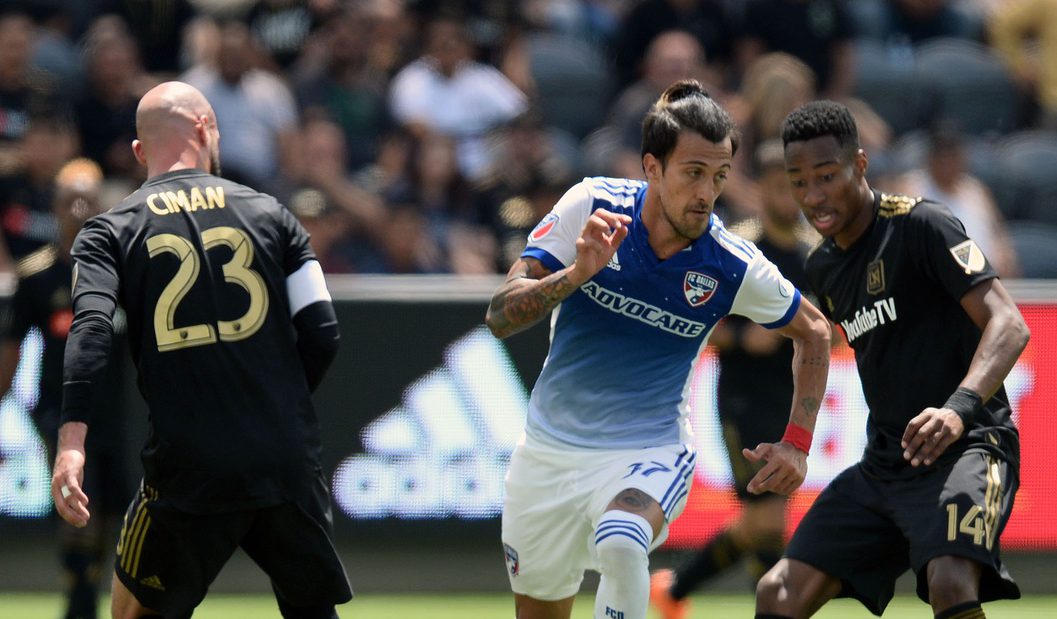 Anytime you suffer a lopsided defeat like FC Dallas suffered a week ago, it’s always going to leave a mark. The goal however is to get back out on the field and erase that defeat from your mind as quickly as possible.

Oscar Pareja’s side may not have undone the loss at NYCFC with a win on Saturday, but they did fight back for a 1-1 draw at Banc of California Stadium against LAFC. They erased a first-half deficit and grabbed a well-deserved point against the newest team in MLS.

“I am happy with a point against a good team like LAFC,” Pareja said. “We went down early but after that we bounced back. We recovered the ball, we had the personality and ability to draw level and following that it was pretty even between both teams.”

Steven Beitashour’s composed finish in the ninth minute gave Bob Bradley’s side a 1-0 advantage in front of over 22,000 fans in Los Angeles. It looked like the defender may have been offside but referee Jair Marrufo had zero problem with the goal.

Despite conceding early, Dallas stuck to the plan and their determination got them their equalizer. Maxi Urruti’s right-footed rifle from long range beat Tyler Miller to the bottom-right corner to grab Dallas a share of the spoils. It was Urruti’s third straight match with a contribution, which now sees him with three goals on the season.

“It was very important to get a point today,” Urruti said. “With the temperature and heat playing a factor, the goal came at the right time.”

Harold Mosquera scored his first goal for Dallas in last week’s loss in New York, after being set up by Urruti. Saturday saw the Colombian repay the favor to his striking attacking partner for his first MLS assist. Urruti praised the important of connections between teammates especially in the offensive half.

“Last week I assisted to Santi and this week he did the same for me,” Urruti said. “The connection between teammates is very important and whoever gets to be there needs to give 100% and that’s what we’re trying to do every day.”

Saturday marked the first match this season where the duo both played up top together. Earlier matches have seen Mosquera play slightly deeper in the midfield, but Pareja can see the chemistry building between them. Dallas will hope they can continue to benefit from one another, which will hopefully lead to more goals.

“They are gelling,” Pareja said. “The chemistry is building more, now we started scoring in the forward. They are gelling up front and what I see it gives us a lot of optimism going forward.”

Kellyn Acosta got his first minutes of the new season for Dallas, coming off the bench in the 61st minute. The 22-year-old replaced Michael Barrios as Dallas tried to preserve their point, seeing the formation switch to a five-man backline. The return of Acosta adds another valuable asset to Pareja’s evergrowing bunch, and the American defender is hoping to continue to progress.

“It definitely was excited to get back onto the field,” Acosta said. “Most importantly we got a tough result, the guys battled through the heat and adversity so I’m happy with the result.”

It’s unsure whether or not Acosta will remain on the bench or jump back into the starting XI for Dallas’ next match, a May 12th home clash with the LA Galaxy.

“I felt a little rusty today for sure,” Acosta said. “It was my first competitive match since the Portugal fixture with the national team. I was really happy to get back on the field, it’s a long time coming but i’m progressing. Having more games I think I’ll get more comfortable and confident out there.”