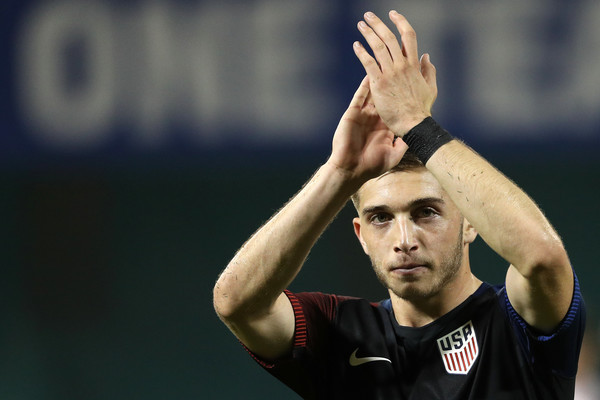 CHESTER, Pa. — For many of the players in the U.S. Men’s National Team camp, this is a time to prove a point to the team in a time of transition. With no World Cup this summer, the National Team is looking for the next set of players to lead the way as they prepare for 2022.

For Sunderland midfielder Lynden Gooch, there’s even more motivation to step up to a new level for Dave Sarachan’s side. The 22-year-old saw his club relegated from the EFL Championship and now are heading to the third tier of English football.

Gooch made 27 appearances in all competitions, scoring two goals and adding four assists. They were his first major contributions for the senior squad after earning his Premier League debut in 2016-17 before the Black Cats were relegated from the top flight.

Now in Sarachan’s 23-man squad for a trio of friendlies, starting with Bolivia on Monday, Gooch is hoping to make an impact as he fights for a spot back in the starting lineup.

“It feels good to be back in the squad for sure,” Gooch told SBI. “I haven’t been in the squad since November so I’m hoping for some minutes tomorrow and in the near future as well.

“I played a lot this year for Sunderland so it’s definitely a big learning curve for me,” Gooch said. “I think I’ve improved a lot as a player going forward and made a lot of appearances for the club which was good. Hopefully I can translate that to the National Team and get back to full fitness as well.”

Gooch made his debut for the USMNT back in 2016, but has found it tough to make an impact since. With the revolving door of players coming in and out of the national team, it’s been tough for Gooch to get a real string of appearances together and gain some confidence. With the average age of the current group being 22, the Santa Cruz, California native senses some extra energy and excitement coming from the team as a whole.

“You can definitely see the enthusiasm from the team as we prepare for this friendly on Monday,” Gooch said. “It will be exciting to see if we can translate that energy into the match tomorrow after some tough training through the week.”

Playing in the lower leagues may be tough for a player to get noticed, especially when your team is on the wrong end of the league table. There may not be a lot of international experience on this current roster, which means anything could happen for Gooch in the form of playing time.

The final result of Monday’s friendly against Bolivia may not be the most important thing, but the main goal is building toward something for the next match. Gooch can see the inexperience among the group, but knows hard work put in by everyone will lead to success in the long run.

“We know we are an inexperienced bunch when it comes to the team as a whole,” Gooch said. “However I think if everyone does their job and players put a good shift in then the result will take care of itself.”