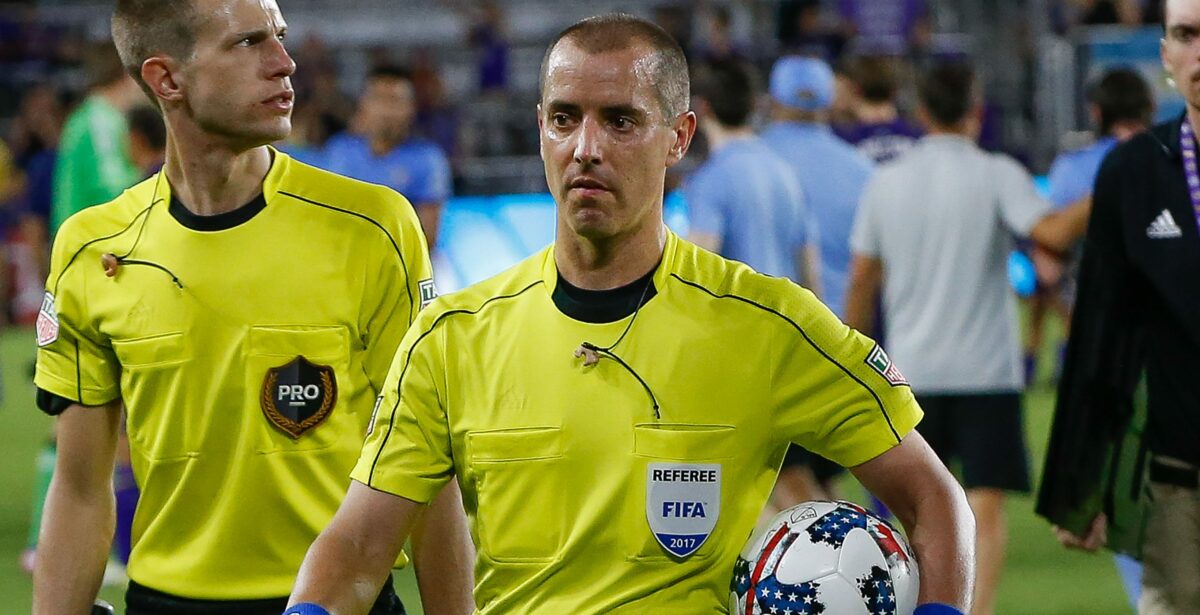 VAR is set to make its World Cup debut this summer, but it has been the source of contention the world round since its introduction. Many have doubted its usefulness at every turn, weighing each and every pro and con any time a referee elects to use video review. Those concerns, though, are not shared by those who will be using the technology in Russia next month.

“I’m confident with everything that’s happened up to this point,” MLS referee Mark Geiger told SBI on Wednesday ahead of a trip to Russia to officiate at a World Cup for the second time. He was joined by the Professional Referee Organization general manager and World Cup veteran Howard Webb and colleague Jair Marrufo, who will joining Geiger in Russia for his first World Cup.

Geiger’s confidence comes from the training the referees selected by FIFA have had to complete to prepare for the tournament. “It’s a two year process,” Geiger said. In that time, the referees have attended several different types of seminars: on-field training with VAR, a VAR simulator, and then a theoretical seminar in which they “get everyone on the same page”.

The MLS referees are some of the most experienced when it comes to VAR, as they began training with it two-and-a-half years ago and using it last summer in matches. Other leagues around the world have followed suit, but the levels of comfort with the technology has concerned many critics of VAR in the weeks and months before the World Cup. At the beginning, Geiger and Marrufo admit, that was certainly the case.

The other referees “noticed that we were so calm about going through the motions,” Marrufo said. He added that those referees felt the need to “get it right really fast,” but it was not the most productive way to learn the VAR-related habits.

“Take your time,” he said, “look at the angles, get the perfect angle, and now show it to the referee.”

The endorsement of patience with regards to VAR is a seemingly controversial one given that many have wondered whether or not the system in place is quick enough to not disrupt the speed of play of the match. Webb, though, feels that once referees get used to the technology, using VAR becomes more efficient.

He also argues that the average amount of time video replay takes is not incredibly disruptive to the natural fast pace of soccer.

Webb came to the United States as PRO’s Manager of VAR Operations last year, and has been closely collecting data on its usage in MLS matches. According to him, the average time it takes to do a check is around one minute and 15 seconds, which is “additional time that we think stoppage would have taken anyway based on studies that we did in 2014″.

Additionally, the former Premier League referee noted that using VAR has not disturbed play at large. In his role with PRO, he has found that, over a stretch of 154 matches in MLS last season, 50 decisions were reviewed, making for an average use of VAR once every three matches. This is a ratio, he said, was matched by the Bundesliga during the 2017-18 season, when there were 50 checks during a stretch of 153 matches.

In addition to demonstrating that referees in different parts of the world are thinking similarly about using VAR, it also shows how often VAR should be used.

As Geiger added, the technology is only intended to be used for “clear and obvious” infractions.

“Just say, ‘Is this clear and obvious?’ You can usually answer that very quickly,” Geiger said. “If you need multiple camera angles and look at it again and again and again, it probably doesn’t meet that threshold, so it’s time to let it go. We’re really looking for those ones that, you look at it the first time, it slaps you in the face. You look at it a second time just for confirmation, and really, you’re ready to go through the process and alert the referee at that point.”

The process, though, has been somewhat exclusionary to those in the stadium. While referees are communicating with each other and some higher-ups and those watching from home can eventually figure out the answers, those at the match end up confused as to why play has stopped, and hardly get their answers once play has started up. Last month, though, FIFA announced that they would share the footage referees were looking at on the stadium’s screens and include written explanations. Though Geiger, Marrufo, and Webb were familiar with the basics of the idea, they were unaware about some of the execution.

“I imagine it’s something similar to what we do,” Webb said. “We send a message out and say that the play is under review for a possible [infraction].”

A second message is then sent out once the decision is made, sharing the referee’s final decision.

Whatever reservations the rest of the world may have, the PRO trio believe that VAR makes a referee’s job much easier.

“I imagine it gives you confidence on the field,” Webb said, “to know that you’ve got somebody to just check in that you’re not going to make a career changing error.”

“It’s twofold,” Geiger added. “It’s getting the check complete, which tells you that you were correct in your decision, and then having the opportunity to fix that glaring error so it’s not sitting there in your mind for the rest of the game.”

The controversial nature of VAR, additionally, has not been felt by the refereeing community.

“In honest conversations we’ve had with people, they’ve seemed comfortable with it in place,” Webb said. “If you give the match official the option to have VAR or take it away for that game, I’m pretty confident he’ll say, ‘No, leave it in place, please.’ I’d rather have it there than not because chances are I won’t need it two games out of maybe three.”

Webb also admitted that there might be some critics of VAR that may never be convinced of its benefits. Regardless, the referees assembled are ready for the task.

“All the referees now have experience, whether it’s in training or in actual games, reffing a game with VAR,” Geiger said. “I think that we’ve gone in the right direction and I think that the people that are going to be in the VOR (video operations room) are going to be handle the pressure and the situations that are presented to them.”