Red Bulls-NYCFC rivalry continues to evolve ahead of latest clash 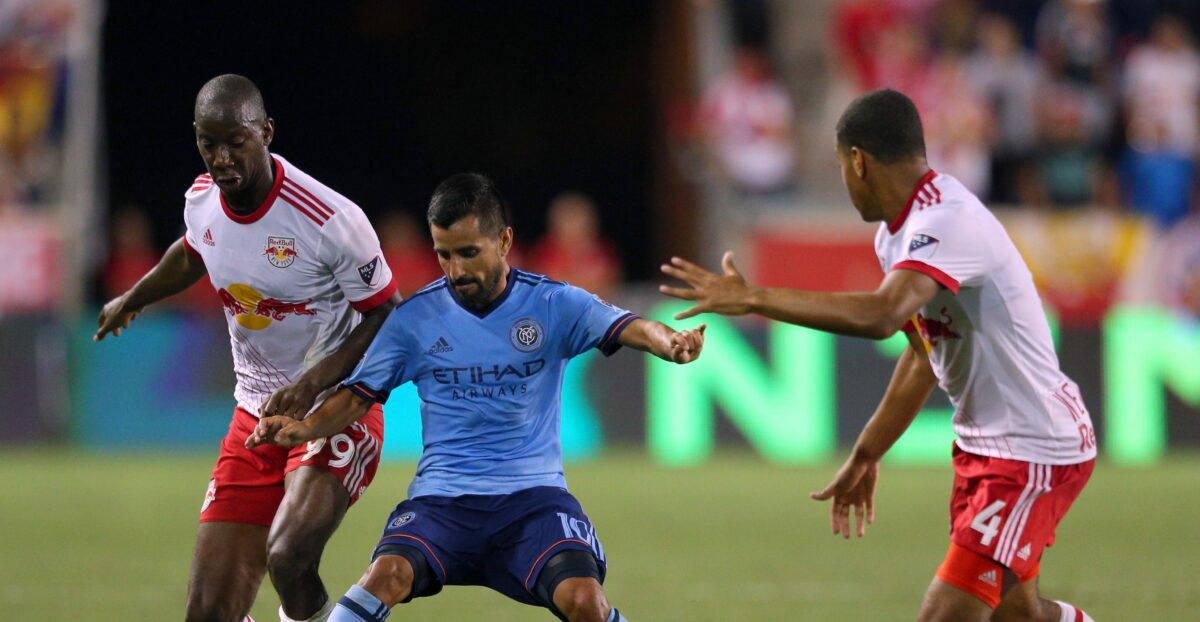 Rivalries evolve as the years go on. It’s only natural. Players and coaches change. Trends develop and end. Moments are created and are then upstaged and overshadowed by recency.

The New York Derby is no different. Much has changed in the few short years since the rivalry’s debut and, with both teams appearing set to contend in a big way in 2018, this year’s debut debut has a different feel than in year’s past.

For the first few years of the rivalry, New York was most certainly red. The 7-0 win remains the headliner but, for years, the Red Bulls dominated the New York soccer scene. In 2017 that changed, though, as NYCFC went 2-0-1 to claim the season series throughout their most successful year in the team’s short history.

“It has gotten bigger,” said Bradley Wright-Phillips. “I think the way we started and winning all the time it gave them some fire. Now, they are on top of the league right now. They have had two good seasons in a row and it is going to be tougher for us. Since it first started, it is definitely getting better and evening it out more, it is not one sided any more. It is good to be involved in it.”

“I think the difference is overall as a team we improved,” NYCFC boss Patrick Vieira added. “The first year of course I think they had a few years in front of us, and I think through the years, with the way we rebuilt the team we closed the gap. We have good teams that have allowed us to challenge them.”

Entering Saturday’s clash, NYCFC FC sits atop MLS with 20 points through nine matches. It’s an impressive haul that’s included some impressive wins as NYCFC has showed off depth and a ruthless attack en route to a push to the top of the standings.

The Red Bulls, meanwhile. have bounced back from a Concacaf Champions League setback with some impressive wins of their own. With a pair of games in hand, the Red Bulls sit eight points behind their conference rivals with a team that is relying on a talented young core with success.

While the Red Bulls’ philosophy has stayed largely the same since  Marsch took over, NYCFC has evolved a great deal since Vieira took over. Familiar stars like Andrea Pirlo and Frank Lampard are gone as NYCFC has rebuilt as a younger, deeper team with players like Jesus Medina, Alexander Ring and Yangel Herrera counted among the team’s core.

“I will not say we surpassed them,” Vieira said, “but we have the team to compete against them because I believe they are part of the favorites of the league because of what they have been achieving the last couple of years. I think the last two years we rebuild the teams to challenge those teams. I don’t say we surpassed them, I just say we have a team to compete against them.”

The Red Bulls have had their changes, though. Vieira pointed to the Red Bulls’ loss of Sacha Kljestan as one that changes the team dynamic, much like Dax McCarty’s departure did the year before.

Still, throughout the rivalry’s history, David Villa and Bradley Wright-Phillips have remained the focal point. Villa recently scored his 400th career goal as he continues to establish himself as one the league’s best ever attackers. Wright-Phillips, meanwhile, also counts himself among the league’s top goalscorers and has proven a particular thorn for NYCFC, having scored 10 goals in as many matches.

“They both rather win than score, there is no doubt,” Jesse Marsch said of the two forwards. “One of the things that makes them special is it is not just the goalscoring; its all the work they do to be real leaders for their team and to set the example. When you have your best player, your top striker, your superstar that is willing to do all the work that is the most humble that is the most committed to the team, my God does it make it easy for the head coach.

“I think the series has been Villa versus Wright-Phillips and, many ways, it will be like that again, but I think it is the job of both teams to put that player in position to succeed as many times as possible and which ever team manages to do that will most likely win.”

Wright-Phillips and Villa won’t be the only players to decide Saturday’s match, just like the game itself won’t be the deciding factor on the 2018 season. There’s a lot at stake, sure, but there’s plenty left to see throughout the season.

That doesn’t soften the anticipation from either side as both clubs look to get an early leg up on their local rival in a clash of the East’s elite.