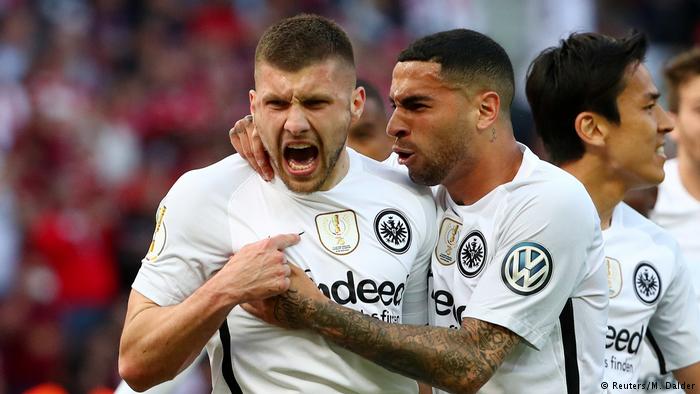 Eintracht Frankfurt was a heavy underdog going into Saturday’s DFB Pokal Final against Bayern Munich in Berlin. However, manager Niko Kovac used a brace from Fiorentina loanee Ante Rebic to defeat the Bundesliga winners 3-1 at the Olympiastadion.

Rebic’s first of the afternoon came in the 11th minute as the Croatian slotted past Sven Ulreich on a breakaway. Robert Lewandowski leveled the score in the 53rd minute as he netted his 39th goal of the season in all competitions. Minutes after Mats Hummels struck the bar for Bayern, Rebic scored the winner for Frankfurt in the 82nd minute. Rebic received a pass from Danny da Costa and smashed a right-footed effort into the center of the goal. Substitute Milat Gacinovic added a third in stoppage time for Frankfurt sealing the first German Cup Final win for his team since 1988. Bayern has now failed to lift the German Cup since 2016 after losses in the semifinals and now the final respectively.

Elsewhere, Real Madrid traveled to Villarreal in their final La Liga fixture of the season. Juventus celebrated winning the Serie A title in front of its home fans after a final day win over Hellas Verona. Lyon and Nice squared off in the top Ligue 1 match of the weekend.

Here are all of Saturday’s European results:

In its final tune up before next weekend’s Champions League final, Real Madrid was pegged back for a 2-2 draw vs. Villarreal. First-half goals by Gareth Bale and Cristiano Ronaldo had Los Blancos up by a pair at halftime.

Roger Martinez began the comeback for Villarreal in the 70th minute with a right-footed finish. Samu Castillejo grabbed a point for the hosts in the 85th minute, scoring his sixth goal of the season. Real had to settle for a point in their last La Liga fixture of the season, finishing in third place. Villarreal finished the campaign in fifth place.

Sevilla grabbed a victory in its final league match of the season, defeating Alaves 1-0 at the Ramon Sanchez Pizjuan. Wissam Ben Yedder scored the only goal of the match, beating Fernando Pacheco in the 28th minute. The Frenchman finished the season with 19 goals in all competitions this season, despite being snubbed in Didier Deschamps World Cup squad.

Pacheco was the busier of the two goalkeepers, making eight saves in the defeat. David Soria was four saves in the home clean sheet for Sevilla, which finished in seventh place in La Liga.

Juventus closed out their league campaign on Saturday with a 2-1 home win over Hellas Verona. A pair of second-half goals scored by the Serie A champs claimed their final three points of the season. Daniele Rugani slotted in Juve’s first in the 49th minute before Miralem Pjanic curled in a free kick to double the advantage in the 52nd. Alessio Cerci pulled a goal back for Hellas in the 76th minute, finishing a cross from Romulo. Despite seeing a late penalty saved, Juventus held on for a win in front of their home fans. Max Allegri’s men now get to head into the offseason celebrating their seventh straight Serie A title. Hellas will finish the season relegated to Serie B and in 19th spot.

In the must-watch match of the day in France, Lyon edged Nice 3-2 at the Parc OL. Alassane Plea’s opener for Nice came in the 18th minute after the Frenchman slotted in Mario Balotelli’s assist. Memphis Depay leveled the score in the 48th minute from close range before adding a pair later in the half. His 65th minute free kick gave Lyon a 2-1 lead before finishing his hat trick in the 86th minute. Plea pulled one back in the 88th minute from long-range but it wasn’t enough. Lyon finished the season in third place while Nice dropped to eighth.

Here’s all of Saturday’s Ligue 1 results: