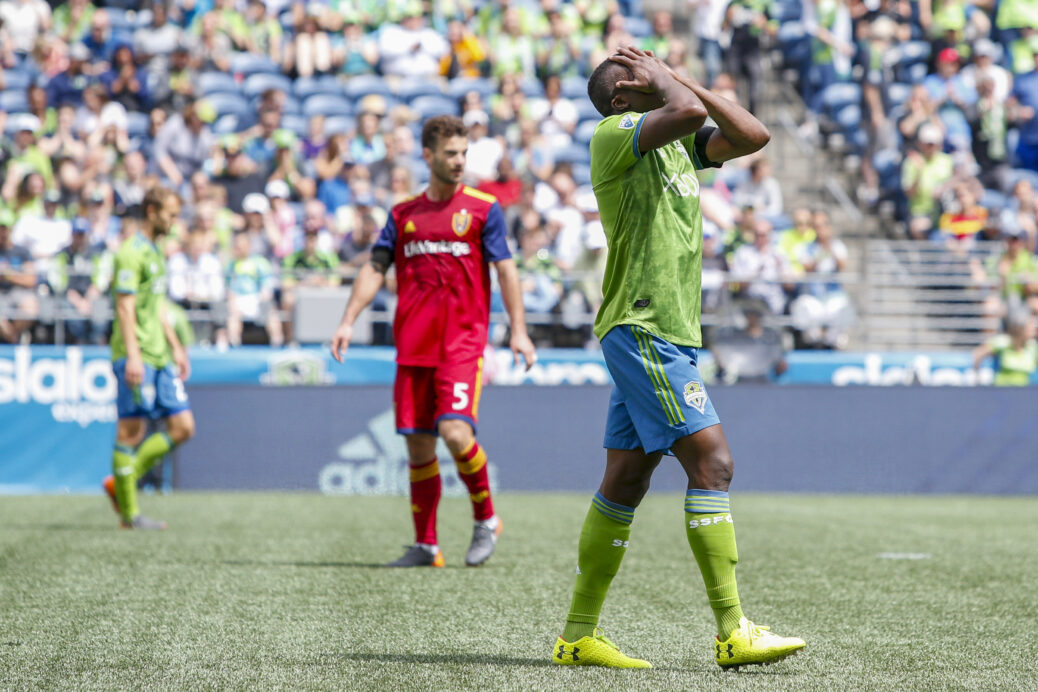 SEATTLE– “I don’t think any of the guys have quit,” said Seattle Sounders head coach Brian Schmetzer following his club’s latest loss. “So that’s the only positive I can have right now.”

It has come to that for the Sounders, a marquee franchise that won the league title in 2016 and is some 22 weeks removed from a second straight trip to MLS Cup: An ‘A’ for effort.

Beset by injuries yet again and now missing three players to World Cup duty, the Sounders fell 1-0 on Saturday afternoon to Real Salt Lake, a woeful road team that had not won an away match in a 10-game stretch spanning parts of two seasons.

The visitors last secured three road points early last August against D.C. United, a club that finished the season tied with the LA Galaxy for the worst record in MLS.

The Sounders now own a 2-6-2 record on the eve of Memorial Day, good enough for a seat next to the Colorado Rapids at the bottom of the league standings.

Perhaps most concerning of all: they have secured a mere four points out of a possible 15 from five home matches (1-3-1). And that lone win? It came over Minnesota United, a second-year expansion team that has posted a 4-17-2 road record in its brief history.

It’s a startling stretch of results for a franchise that has fueled championship-caliber success with high-octane home performances. The Sounders under Schmetzer define themselves, as much as anything except the 4-2-3-1, by their ability to forge results from home matches against any and all comers.

From late July of 2016  — when Schmetzer replaced Sigi Schmid as head coach — through the end 2017, the Sounders lost just once in 29 matches played at CenturyLink Field, posting a 19-1-10 regular season home record. The one loss came to Toronto FC last season, arguably the best team in MLS history. The Sounders were only shut out at home three times in that stretch, and closed out 2017 by winning their last five home matches by a combined score of 15-0.

Then came 2018, a year notable thus far for injuries, middling performances, and for failing to score in four out of five home games.

Gone at forward for the season is speedy U.S. international Jordan Morris, out with a torn anterior cruciate ligament. Out for the last two matches is his replacement and the club’s leading scorer, forward Will Bruin. Nicolas Lodeiro, Osvaldo Alonso, Gustav Svensson, and Roman Torres all missed Saturday’s match due to injury or World Cup duty.

Offseason signings Kim Kee-Hee and Magnus Wolff Eikrem played Saturday, but have come along slowly due to injuries of their own. Even promising Homegrown signing Handwalla Bwana left the match midway through the first half with a foot injury.

Those are far from insignificant names, especially in a league that so tightly handcuffs spending. In MLS circa 2018, it is nigh impossible to contend if multiple Designated Players, TAM signings, and international-caliber contributors sit idle.

And yet the feeling persists that something else is missing in Seattle, too. There have been uncharacteristic, game-changing mistakes down the stretch.

On Saturday, RSL midfielder Sebastian Saucedo delivered the game-winning goal in the 61st minute with a ferocious strike from just outside the penalty area. Goalkeeper Stefan Frei was faultless, doing well to even get a glove on the ball as it tore toward the far netting.

But Saucedo initially received a pass in a harmless position along the sideline, more than 30 yards from goal. He turned on and blew by usually reliable right back Kelvin Leerdam.

“I think Kelvin should have just forced him wide,” said Schmetzer after the match. “We defend inside-out.”

Once past Leerdam, Saucedo encountered nothing but an expanse of open FieldTurf until nearing the top of the 18-yard box. Both Alex and Cristian Roldan each put in otherwise credible shifts in central midfield, but were slow to close the channel on what ended up being the defining play of the afternoon.

“If I could have helped Kelvin on that last play,” said Cristian Roldan after the match. “If my brother could have [helped], if we could have eliminated that situation in the first place…those little things add up.”

Saucedo’s strike was one of just two shots on goal all afternoon for Real Salt Lake.

“It’s a page we need to take out of their book right there,” said Frei. “You don’t need too many if you finish them.”

That second-half breakdown was not an isolated incident in a season seemingly full of them. Schmetzer himself pointed to a late goalkeeping error that led to a road loss at Los Angeles FC and questionable defending that led to a stoppage-time, game-winning Portland Timbers goal two weeks ago.

“Whether we’re tired mentally,” said Roldan, “physically we’re tired, or we just make more mistakes in final moments of the games, I don’t know. I don’t know what it is. But that can’t happen at home. The reality is, we’ve been shut out way too many times at home. We’ve lost too many home games already.”

The Sounders have now failed to score in back-to-back home games, and a goal never looked all that likely in either match. They managed just one shot on target against a 10-man Columbus Crew team the last time they played at home, and put only three shots on frame Saturday.

The Sounders threw bodies forward after falling behind against Real Salt Lake, but only mustered a header from substitute Lamar Neagle that slapped the crossbar before ricocheting out of bounds.

“Once they score,” said Frei, “we try everything we can and we throw the kitchen sink at it. But even then, did anything really come out of it? Maybe Lamar’s half-chance. Right now the struggle is that we’re not close to scoring goals. We’re not facing a Nick Rimando who’s having an absolute blinder today. We’re not striking the crossbar and the post six times. We just are not…we’re not there.”

While the Sounders are, as Schmetzer repeatedly noted Saturday, still working hard, there is a difference between merely toiling away and playing soccer with purpose, with palpable passion, and with confidence.

“We’ve worked our tails off [in training],” said Roldan, “and what’s frustrating is we come to this game and we don’t bring that same intensity, we don’t bring that same bit of spark that we have in training. I would say that’s the most frustrating part. But from a positive viewpoint our trainings have been fantastic, and they need to stay that way in order to get out of this hole.”

The situation has left players and coaches alike searching for answers, and struggling to find any.

For his part, Schmetzer is expressing confidence that things will turn around.

“Something has to break for us,” he said. “As soon as it does break, I think we have more goals in this team. Somebody just has to start the train moving.”

Maybe. The increasingly somnolent crowds as CenturyLink Field certainly hope so. The Sounders recovered from what seemed impossibly slow starts in both 2016 and 2017. Yet much of a season sits between Memorial Day and the thick of the transfer window, when a Jordan Morris replacement will presumably arrive. World Cup players are not coming home anytime soon. And as Handwalla Bwana can attest, dissipating injuries are no given.