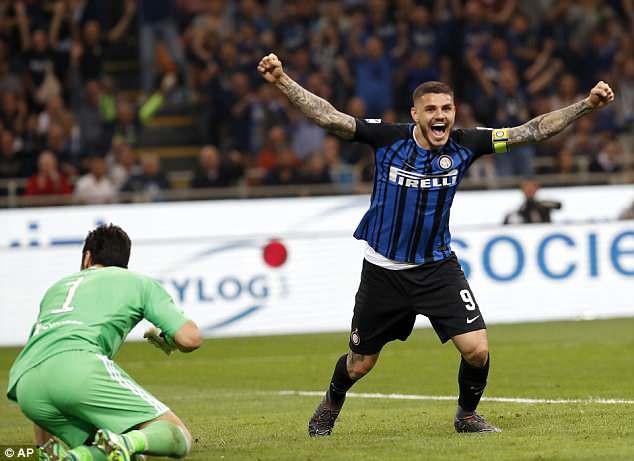 In any sport, it’s how you begin a season but how you finish a season. Inter Milan ended their season on a high note, defeating Lazio 3-2 for a spot in next season’s Champions League.

A pair of second-half goals by Inter snatched them the road win at the Olimpico against a nine-man Lazio side. An own goal by Inter’s Ivan Perisic gave the hosts a 1-0 lead in the ninth minute. Danilo D’Ambrosio leveled the score at 1-1 in the 29th minute finishing from a rebound in front of goal. Felipe Anderson’s long-range strike in the 41st minute gave Lazio a 2-1 lead heading into halftime. Mauro Icardi scored his 29th goal of the season to level the score at 2-2 in the 78th minute. Senad Lulic saw a second yellow card in the 79th minute, before Matias Vecino headed in Inter’s winner in the 81st minute. Frustration boiled over for Lazio as Patric saw a straight red card in stoppage time. With the win, Inter finishes in the top four while Lazio drops into fifth.

Elsewhere in Europe, Napoli faced off with Crotone at home, while Atletico Madrid welcomed Eibar to town in Spain. La Liga winners Barcelona concluded their season with a home clash against Real Sociedad.

Here’s all of Sunday’s European results:

Barcelona ended the season on a high note at the Camp Nou, defeating Real Sociedad 1-0 on Sunday. Following a scoreless first-half, the Catalan side snatched the lead through the figure of Philippe Coutinho. The Brazilian curled a right-footed shot into the top-right corner in the 57th minute. It was Coutinho’s 10th goal of the season for Barcelona in all comps. Real Sociedad only mustered two shots on goal, ultimately finishing the campaign in 12th place. Barca also saw Andres Iniesta play his final match for the club, starting and playing 82 minutes before being subbed off.

Atletico Madrid could only grab one point in their season finale on Sunday, drawing Eibar 2-2 at home. In his last match for his boyhood club, Fernando Torres scored a brace in an 18-minute span. Torres’ first goal came in the 42nd minute as he canceled out a 35th minute opener by Kike Garcia. The Spaniard put Atletico in front in the 60th minute as he slid Diego Costa’s through ball into the center of the goal. However, Lucas Hernandez was sent off for Atletico in the 63rd minute and Eibar took advantage in the 70th. Ruben Pena beat Jan Oblak from long-range to snatch his side a point at the Wanda Metropoliano. Eibar finishes the season in ninth, while Atletico finish as league runners up behind Barcelona.

Napoli ended their Serie A campaign with three points at the San Paolo in a 2-1 success over relegated Crotone. Arkadiusz Milik opened things for the hosts in the 23rd minute, heading in Lorenzo Insigne’s cross. It was the Polish striker’s sixth goal in all competitions. Jose Callejon doubled Napoli’s lead in the 32nd minute as he slotted in fromt close-range with Insigne bagging another assist. Marco Tumminello pulled one back for Crotone in the 90th minute, scoring from long-range but it ended up being a mere consolation. Napoli finish the season with 91 points and in second place, while Crotone are headed to Serie B.