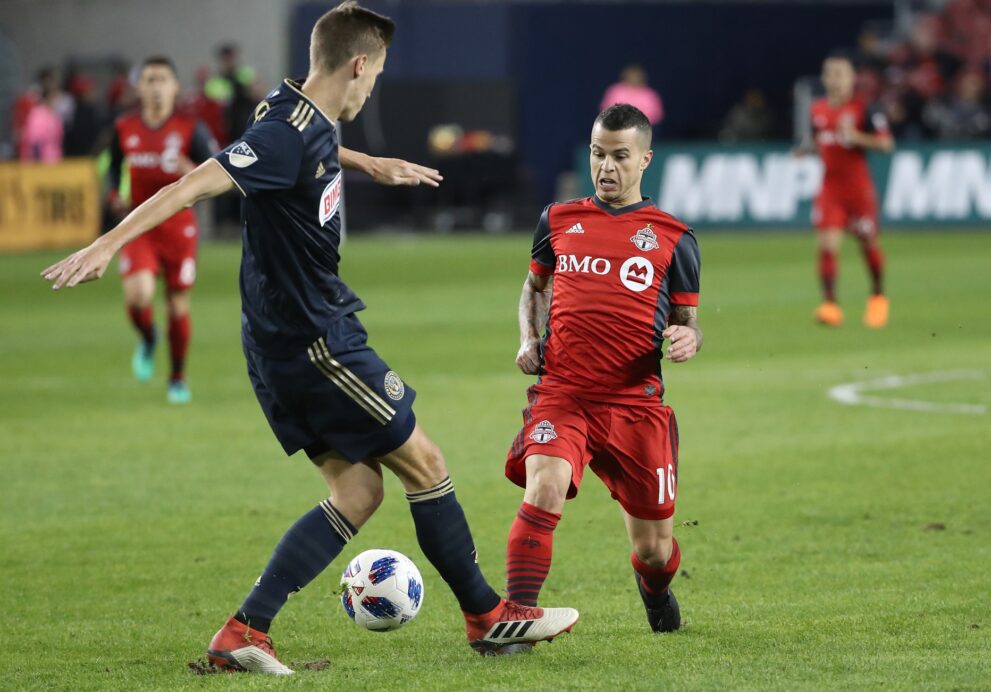 The heartbreak of losing in a final of a competition is something that could hang over the head of a team for quite a while. Even though you have to forget it, it isn’t easy at all to wonder what could’ve been.

Following their CONCACAF Champions League final defeat, a cloud of doubt sat over Toronto FC as they tried to get back to their old selves. Allowing the Chicago Fire a point a week ago added to that cloud as they returned to play this weekend. Friday night that cloud looked to have gotten a little smaller as the hosts rolled to their second league win of the MLS season, a 3-0 triumph over the Philadelphia Union.

“The moment right now is not great, so getting the win tonight was very important,” Sebastian Giovinco said. “We’ve been missing some players as well so offensively I think we were good tonight and we got the win which was the main goal.”

Jozy Altidore and Justin Morrow are two players that have been struggling with injuries at the moment for Toronto and have only played four combined matches this season. However it was two familiar faces that got on the scoresheet on Friday, a Canada native who capped the final score.

Victor Vazquez continued his strong form with a goal in his second consecutive match, while Giovinco and Jay Chapman also tallied goals. Vazquez’s flicked finish in the 28th minute gave Greg Vanney’s men a 1-0 first-half lead, before the latter of the two added in the second-half. Even though he has two goals on the season, Vazquez still believes he is not at his best.

“I feel good but I don’t feel I am at my best just yet,” Vazquez said. “I wanted to play from the start tonight, which I was happy I did and I’m also scoring some goals for the team which is always most important.”

Vazquez knows the importance of his side getting back on track and it started with the home win on Friday. Now he is hoping that they can build off of it and force their way back up the Eastern Conference standings.

“It was a huge three points, especially after the tie against Chicago last weekend,” Vazquez said. “The final minutes against Chicago was tough and we were ready for this match. We were anxious but we played our game and showed how we want to play. Now we have to prepare for a huge match against Seattle.”

Vazquez now has two goals on the season, but has yet to register an assist in three matches. Despite 11 a season ago, it doesn’t mean the Spaniard’s importance to the team offensively has taken a dip at all. His vision and awareness are two skills that head coach Greg Vanney praised following the match.

“Victor’s general awareness of the field is spectacular,” Vanney said. “He understands where to move in order to find gaps and spaces, and after he makes a move he already knows where everything is. It’s fun to watch guys that play between their ears and he is as good as it gets.”

After Toronto grabbed their second goal of the night, they looked comfortable until the end of the match. Alex Bono made three saves in the first clean sheet for the club in MLS play this season, really only being troubled once in the first-half. A header from Alejandro Bedoya in the 10th minute was pushed off the crossbar by Bono, but the 24-year-old gathered the loose ball quickly.

Now sitting on a 2-4-1 record and ninth in the standings, Toronto continues a busy month of May with a rematch of last season’s MLS Cup Final against the Seattle Sounders on Wednesday. They have three home matches remaining in the month, with a trip to New England also on May 12.