Homegrown Player Zachary Herivaux finally getting his shot with Revs 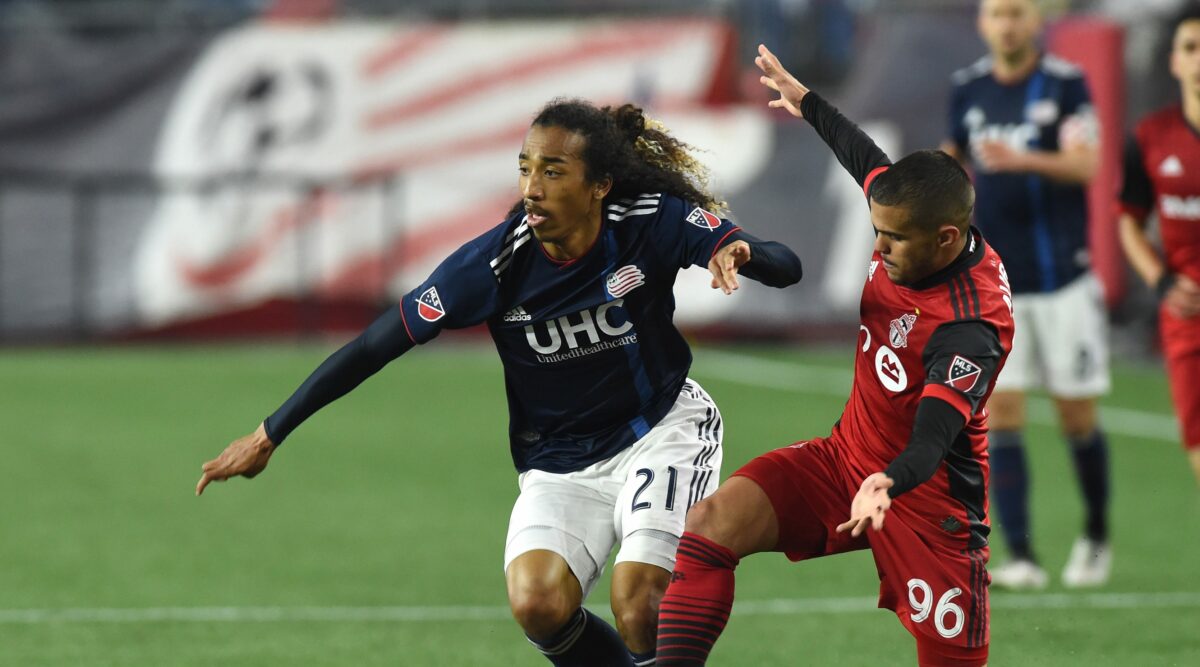 FOXBOROUGH, Mass. — The New England Revolution don’t sign Homegrown Players very often, so when the team made Zachary Herivaux its third such player in team history back in May 2015, it wasn’t a stretch to think the Revs had big plans for the now-22-year-old central midfielder.

After all, the first two products of the Revolution Academy system were Diego Fagundez and Scott Caldwell, who are in their eighth and sixth seasons with club, respectively, and have combined to start 277 games and have each won the Revs’ team MVP award. Meanwhile, Herivaux has been waiting and waiting and waiting for his opportunity to break into the lineup.

That moment may have finally arrived as, last weekend, Revolution coach Brad Friedel finally called Herivaux’s number. Herivaux substituted on for Kelyn Rowe for the final 23 minutes of the Revs’ 3-2 home win over Toronto FC.

“He’s always been telling me to work hard in training and that’s what I’ve been doing,” Herivaux said. “I always put my head down and just work and wait for my opportunities and I knew it was going to come this season.”

The appearance was Herivaux’s first since coming on in the 89th minute of a season finale win over the Montreal Impact back in October 2016. Thirty-three players had taken the field for the Revolution since Herivaux’s last spell, as he was the only field player not to make an MLS appearance in 2017.

“He has been doing excellent in training,” said Friedel, who brought Herivaux’s name back into the fore when he controversially said back in April that he didn’t need Lee Nguyen in his game day 18-player roster because Herivaux could back up Diego Fagundez in the No. 10 role. “I’m really happy that he was able to come on in the second half.”

The 6-foot-1 Herivaux played as the central attacking midfielder last Saturday, with Fagundez shifting out to his former position on the left wing.

Fagundez, who has started all 10 games this season, will miss this weekend’s home game against the Columbus Crew due to yellow card accumulation — the match also coincides with the birth of his first child, so Fagundez won’t mind the day off — potentially giving Herivaux another chance to play.

Rowe, who was injured when Friedel had called Herivaux his backup No. 10, can also man the position, but with Juan Agudelo also likely out this weekend, Herivaux should be in line for at least another sub appearance.

Friedel said after the TFC win that Herivaux was in the mix to start, but didn’t clarify whether that meant in the same role Herivaux came on as sub or in what has been considered his more natural box-to-box midfielder role.

“Not just tonight, in other games as well,” Friedel added when pressed about potentially starting Herivaux. “He was excellent when he came on. Not easy. Pace of the game was really high. Toronto put on (Sebastian) Giovinco, they put on (Victor) Vazquez, they put on (Chris) Mavinga with fresh legs, so the tempo of their play rose and I thought Zach coped very, very well.”

“He just views me as a midfielder and whatever position I’m out there, I just play it,” Herivaux said. “Whether it’s the eight, six, 10, it doesn’t matter. They train me in all three of those positions, so I’m prepared.”

His lack of playing time to date might simply just be a result or circumstance, similar to players such as Fagundez and Rowe, who were blocked from playing attacking midfield by Nguyen, or Dallas’ Jacori Hayes, who has excelled since getting a chance after Kellyn Acosta’s hernia surgery.

Herivaux isn’t holding onto any bitter feelings over the past Jay Heaps era.

“It’s a different situation,” Herivaux said of not playing in 2017. “We were in a tough situation all season. We weren’t really performing, so it’s difficult to take risks and I’m not going to talk about that subject. I’m just moving on.”

Herivaux has had a fascinating life to date. Born in Japan while his father, Pedro, was playing professionally there, Herivaux grew up in Brookline, Mass., and has already been capped for his father’s home country of Haiti.

He also played for the Shalrie Joseph Soccer Club, and although he has a slighter frame, has long been a favorite of the club legend central midfielder.

Herivaux was one of the few beneficiaries of the Revolution’s stagnant strategic partnership with Sporting Clube de Portugal, training for several weeks with the Lisbon giants after his rookie season.

In 2016, Herivaux made his first meaningful contributions to the Revs, appearing in five MLS games but only totaling 38 minutes, while also becoming a fixture in the team’s U.S. Open Cup lineups.

After a quiet 2017 in which Herivaux did a brief loan stint with the USL’s San Antonio FC, he again flashed promise in the Open Cup with a pair of commanding performances, but couldn’t break into Heaps’ MLS lineup.

However, a fresh start under Friedel seems to have revitalized Herivaux’s career, as he has been chosen for the bench nearly every game so far and fits the profile of what the Friedel looks for in terms of speed and stamina. Although his career got off to a slow start, Herivaux may soon be reminding people that it’s too early to give up on him making an impact in MLS.