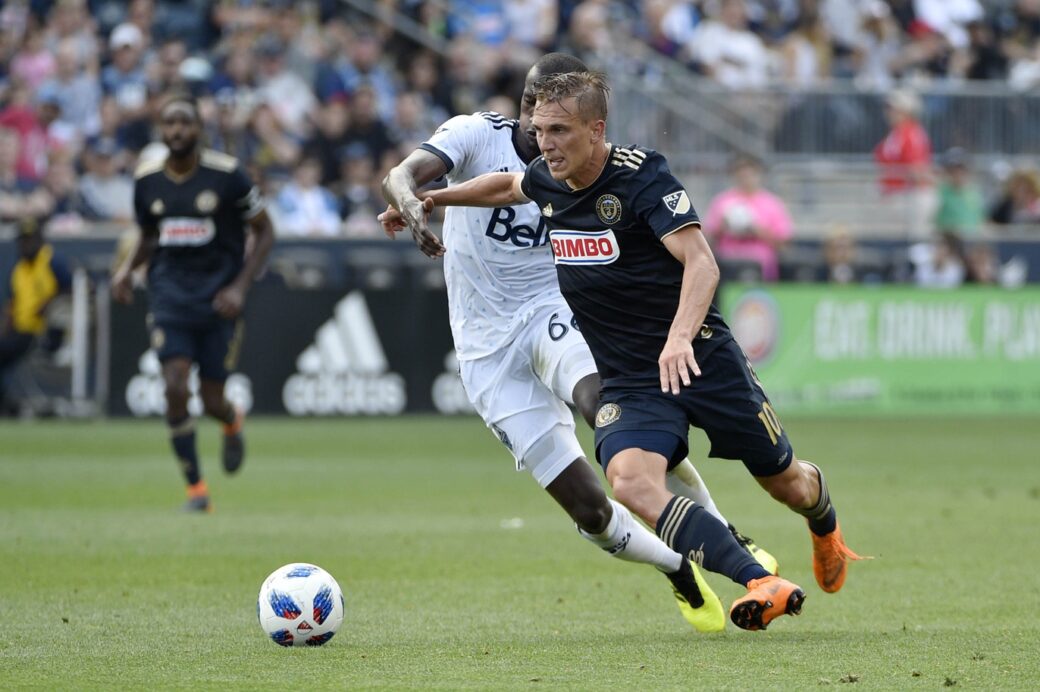 The Philadelphia Union have  teased their fans at moments this season showing signs of playing good attacking football. Still, consistency has been the biggest question mark for the team who have struggled to continue taking steps forward.

On Saturday, the Union had one of their best offensive performance of the 2018 season as they rolled past the Vancouver Whitecaps 4-0. It was the perfect day for the team as they also honored Sebastien Le Toux, one of the team’s greatest players, as they inducted him into the Ring of Honor at halftime.

With all the energy and action around Talen Energy Stadium, the Union stuck to their plan and handed Vancouver a lopsided defeat on the road. Following the 15-day layoff from league play, Union head coach Jim Curtin was proud of his team for getting the job done.

“Overall, a very strong performance from the players,” Curtin said. “It was an important game especially with us without one of our best players. Obviously you do not want to fall behind at this stage of the season but it was an important result for us and to get the clean sheet.”

“We talked a lot about knowing that Vancouver is one of the best teams at sitting deep with ten guys behind the ball and then countering and breaking. I thought we handled the first half extremely well and played some of our best soccer.”

Borek Dockal headlined the offensive success for Philadelphia, scoring two goals on the day. Brazilian winger Ilsinho chipped in a third from the penalty spot, while Fafa Picault iced the afternoon with a stoppage time PK of his own.

With Haris Medunjanin missing out due to suspension, Dockal led the Union’s creative front and was rewarded with a pair of goals. The 29-year-old Czech leads the team with five goals this season, and is one of 10 players in MLS to have at least five goals and five assists in 2018. Dockal felt that overall the team’s performance was one of the best this season and as a group they all felt comfortable.

“For the first time maybe this season, I felt like we had control for 90 minutes,” Dockal said. “Usually we make it difficult for ourselves in the second half with a stupid goal we concede. This time we had full control of the game. I felt this first half was one of the best halves we played all season.”

The Union totaled 25 shots in total against the eventual nine-men Whitecaps, and peppered Caps keeper Brian Rowe with 11 shots on goal.  It was the most shots on goal that Philadelphia have had in a MLS match this season, proving that things look to be turning around. Their 609 passes also shows the improvement possession-wise that the Union seem to be showing as they continue to build offensively.

Curtin has noticed some small changes in the group as a whole which he feels will benefit the bunch. The question remains can they build off of this performance in their next match in Los Angeles on June 30th.

“I said it to Earnie (Stewart) Friday after training that we are at a stage where I know we are going to play soccer now,” Curtin said. “I know that we are going to keep the ball, attack and create chances. The question is how will we handle adversity? Fortunately today we did not get to find out, which I am happy with.”

Their first win since May 30 sees the Union (6-7-3) occupying the final playoff spot in the Eastern Conference. A road date with LAFC beckons next weekend before a busy month of July features home meetings with both Atlanta United and the LA Galaxy.