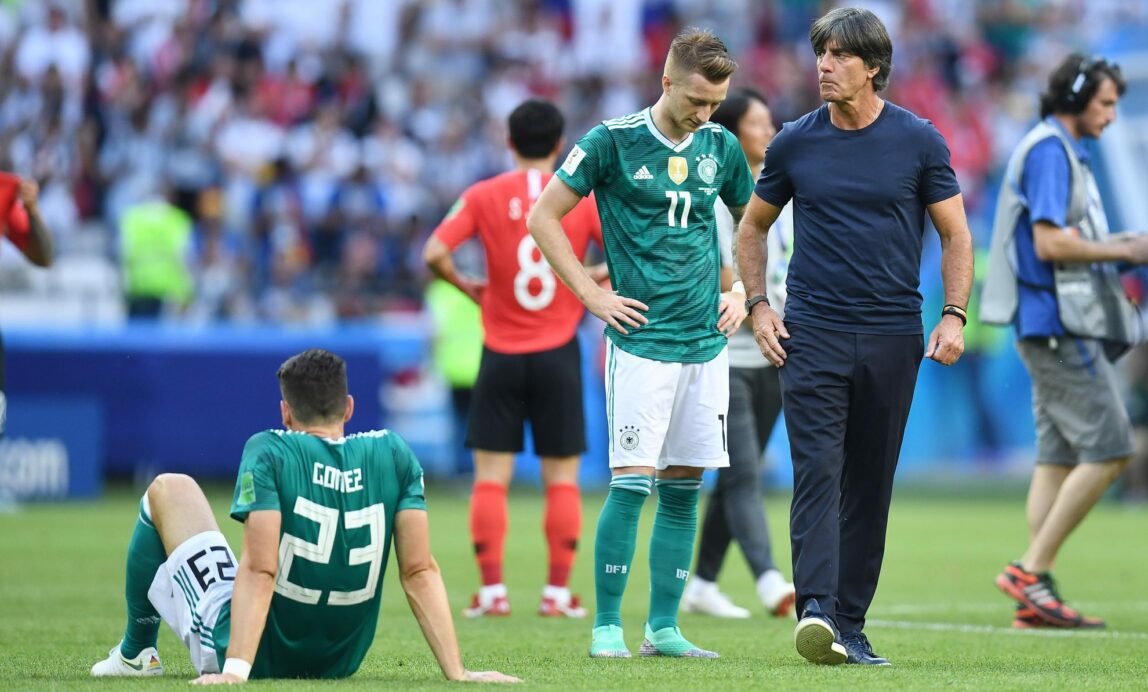 Germany’s World Cup can only be described as a catastrophic failure. The expectations for the defending champs were nothing less than bringing another trophy back to Berlin and what they got as a very brief appearance in Russia to go with a very early exit.

Germans everywhere will begin pointing fingers, looking for a convenient scapegoat to pin this tragedy on, but, in the end, it was a total team effort. From experienced players declining, to youth failing to rise up, and even the inability of a world class international manager to form a plan, nobody escapes blame as Germany crashed out of the World Cup in the group stage for the first time ever.

For a team with Germany’s reputation, the group stage of the World Cup is supposed to be a warm-up for the real challenge that lies ahead. In this year’s edition of soccer’s quadrennial global party, Germany were expected to handle a draw with Mexico, Sweden, and South Korea with relative ease before moving on to a knockout round where anything is possible.

At that point, the expectation was nothing less than winning the World Cup for the second time in a row.

Instead, Germany lost a tricky match against Mexico, got a last second win on a once-in-a-lifetime goal against Sweden, and failed to breakdown the organized defense of South Korea before conceding two late goals against the run of play. As a result, their World Cup came to a premature close after only three matches.

The German team was supposed to be a generous mix of experience from the 2014 triumph and the next generation of German talent. It was supposed to feature Mesut Ozil, Thomas Muller, and Sami Khedira welcoming the likes of Julian Brandt, Joshua Kimmichand Timo Werner to a side capable of running the world for years to come.

Instead, everyone on the German roster, except perhaps Toni Kroos, will feel like they should have contributed more. Kroos scored the team’s biggest goal of the tournament and led the team with 15 total shots. Second best on the team was Werner, with only seven.

Ozil and Khedira were apparently so disappointing to manager Joachim Low against Mexico that they were dropped for the Sweden game before coming back into the lineup for the fateful finale. Ozil managed to recover and have a pretty strong game against South Korea, but Khedira had yet another poor showing and was subbed off for the more attack minded Mario Gomez early in the second half.

Muller, who was relegated to the bench after the Sweden match, had a similarly disappointing tournament. He was hardly ever in threatening positions and struggled to set his teammates up as well.

The failures of the experienced names trickled down to the youth, especially Werner. The RB Leipzig forward was supposed to rise up in this tournament as the next up and coming German striker. He started all three matches and played 266 out of 270 total minutes at the front of the attack. Despite all this time, he only took seven shots with only one on target. This is not the type of performance any team wants from it’s lead attacker.

The other scapegoat for the Germans will be Low, who really couldn’t settle on one coherent lineup for his world class team. He made fairly radical changes after both the first two games and none of them seemed to work. It’s clear that something needed to be done after the disjointed performance against Mexico, but Low missed the mark and didn’t put out a much better team against Sweden.

Low made even more changes to his attack before the final game against South Korea, but still couldn’t get any sense of coherence up front. Passes went awry at the wrong times, shots flew way off target, and the defense conceded at the least opportune time as the German sense of desperation grew.

Unlike most national team managers in this situation, Low isn’t automatically going to come back to Germany with a pink slip on his desk. He has the reputation of winning a World Cup. He has shown the ability to build and organize a team in the past and he may get the chance to do so again, if he wants to.