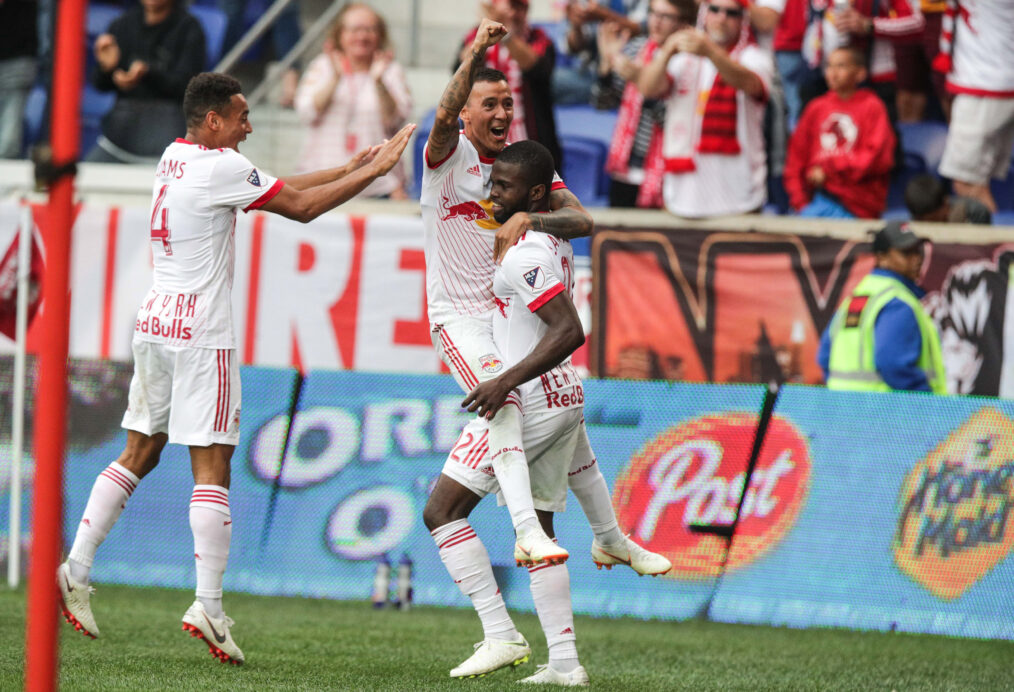 Kemar Lawrence hardly ever makes the headline, but in the New York Red Bulls’ 3-0 defeat of FC Dallas on Saturday, he stepped into the spotlight. Putting in his usual dominant display on the left wing, the left back not only helped pick up a clean sheet, but provided his first league goal in over a year.

The play that resulted in Lawrence’s goal, the final one of the match is not typical for the Red Bulls, and particularly Kaku, who recorded the assist on the goal. The defender ran quite the distance to get to the penalty area and finish from a tight angle, but in order for Kaku to complete that pass, Lawrence had to do a bit of convincing in the days leading up to the match.

“Me and him have been at it for a couple of days in a more friendlier
way because he sees so much things sometimes,” Lawrence said. “Sometimes I’m running from so far that he sees me but he’s like, ‘Kemar is running from so far, I don’t want to play him.’ … Lately I’ve been telling him like put it in the space, you know I’m going to get there. I got the speed to get there so just put it in the space and let me get there.”

Finally, Lawrence got the pass he desired.

“He was screaming at me from midfield and to be honest I saw him [and] gave it to him,” Kaku said. “He’s very fast and luckily the ball went in.”

Additionally, the match highlighted Lawrence’s growing role with the Red Bulls, becoming a leader in the side. After joining the team three years ago, he has become one of the more experienced members of a team full of players just starting their professional careers.

“I kind of understand now that I’m a leader in the team,” Lawrence said. “I’m one of the persons that the guys look to shut down the best team’s winger or attacker, so sometimes I gotta talk, I gotta share what I see with the team.”

The leadership was more than needed on a day like Saturday, when the team went down to ten after Daniel Royer’s red card in the 27th minute. The team’s goalkeeper, Luis Robles, spoke about Lawrence’s leadership style, calling him a “a great character in this locker room”.

Ultimately, though, Lawrence leads by example.

“He not only brings a lot of positivity but just energy, and it’s not just in the locker room but in the game and we saw that today,” Robles said. “The way he was able to get up and down the line, he created mismatches, he was a headache for them all ninety minutes and then, even when they tried to play the ball on the weak side, it’s not easy to win a header over him. So, it’s great that he got the goal but all together what he was able to do along with the entire defensive unit was amazing and that shut down a very, very, good Dallas attack.”

It was as well-rounded a performance that could be expected out of the left back, who has quietly been enjoying a strong season.

“[Jesse Marsch] always told me that when I’m at the place where nothing can get by me is when I’m always alert … and I’m kind of at that place right now,” Lawrence said. “It’s fun being there, it’s fun training, and it’s just fun being out here right now.”