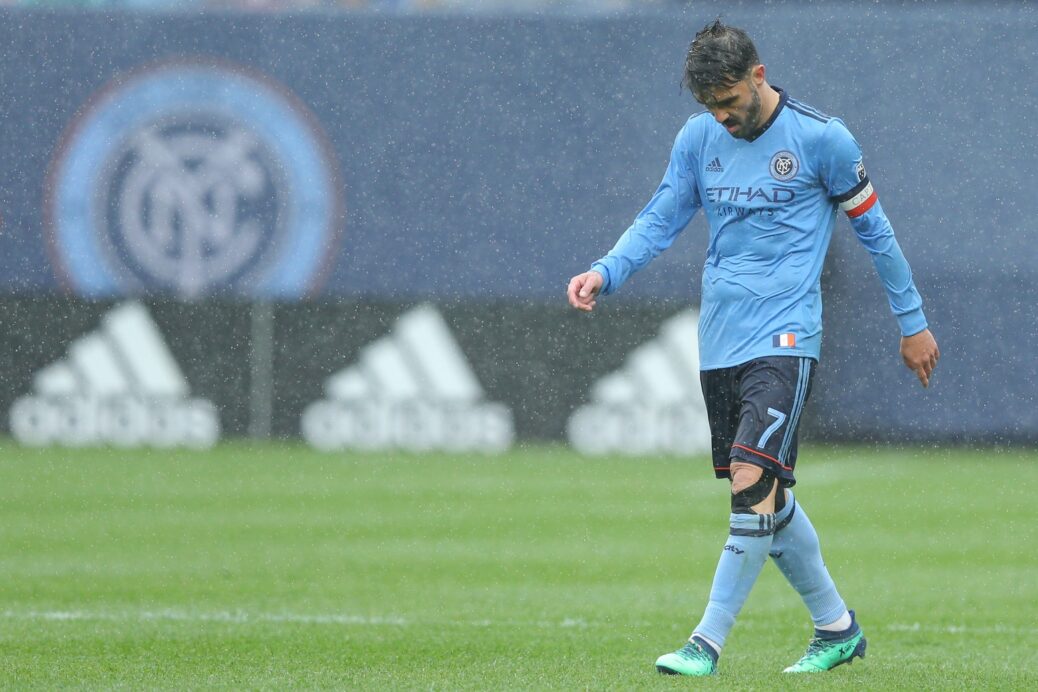 David Villa has been a huge piece to NYCFC’s success this season, but the Spaniard looks to be set for a short spell on the sidelines.

Villa suffered a right knee injury in last weekend’s 2-1 win over Toronto FC, which saw him substituted in the 28th minute. According to MLS Soccer, Villa is expected to miss one-to-two matches with the injury, including Saturday’s trip to Chicago in Eastern Conference action.

The 36-year-old leads NYCFC with eight goals in 14 league matches this season, but has failed to score in his last three appearances.

“It’s bad news for us because he’s a key man for our team. He has a lot of experience, especially in these kind of games,” NYCFC head coach Domenec Torrent said after last week’s match. “It’s not good news, but we have fantastic players. I think we have a talented team and I think quickly how is the best way to win the game without David. It’s not easy for us because he’s the reference in our offensive team, but football is something like that.”

With Villa expected to be out, Jo Inge Berget could be the possible replacement up top for NYCFC.

The Vancouver Whitecaps will be without playmaker Cristian Techera for three matches after the Uruguayan was handed a suspension by MLS on Friday.

According to MLS Soccer, Techera was suspended for offensive language during last weekend’s 4-0 loss to the Philadelphia Union. Techera has also been fined an undisclosed amount by the league for his actions involving the Union’s Fafa Picault.

“MLS has a zero tolerance policy against offensive, discriminatory language at its games, and is committed to creating an environment in which all individuals are treated with respect and dignity,” a league statement read.

Techera will serve his suspension for Vancouver’s matches on July 1st vs. Colorado, July 7th vs. Chicago, and July 14th at D.C. United.

He currently has six goals and one assist in 12 league matches this season.

Orlando City face a daunting test on Saturday at MLS leaders Atlanta United, as they try to turn the tide on a dismal run of form.

Winger Justin Meram will not be available for the Lions as he was released by the team for three days to deal with ‘personal problems’, according to ProSoccer USA. Meram has struggled to find consistency in his first season with the club, scoring one goal and adding two assists in 16 appearances.

Orlando City did not provide a reason for Meram’s absence this weekend, and the 29-year-old did not train on Friday. The Lions are currently on a seven-match losing run in MLS action, sitting in eighth place with 19 points in the East.

“What I’ve dealt with, death threats or, comments of – you know we have Mason [Stajduhar] here who just came over cancer – but comments of, ‘You know, you look like a cancer patient,’” Meram said Thursday, later clarifying fans wished death upon him but stopped short of threatening to take action.

“These things … it’s so easy for these people to sit at home or on their phone or in the stands and make these comments about a player. But, you know, they want success.”

The New England Revolution were recently denied in a recent attempt to add to their attacking front.

According to MLS Soccer, the Revs are interested in acquiring Spanish playmaker Bojan Krkic but were left stymied by his high salary requirements. The 27-year-old is currently under contract with recently relegated Stoke City of the English second-tier, but spent 2017-18 on loan with La Liga side Alaves.

It was the second consecutive season in which Krkic was sent on loan, after a thrilling start to his career. Krkic was a product of Barcelona’s famed La Masia system and scored 41 goals in 163 appearances with the La Liga giants during his four seasons there.

He also broke Lionel Messi’s record for making his Barcelona debut at 17-years-old. Krkic scored one goal in 15 appearances for Alaves last season, and is under contract with Stoke until the end of 2019-20.

If the Revs are still interested in acquiring the Spanish playmaker they will have between July 10th to August 8th to do so.

D.C. United will be without one of their starting midfielders as they travel to Foxborough this weekend.

Midfielder Paul Arriola will miss his side’s Eastern Conference date with the New England Revolution due to a hip flexor injury, according to MLS. The 23-year-old played the full 90 mintutes in D.C.’s 4-4 draw at Toronto FC last weekend, scoring the second goal for his team.

Arriola has made 11 appearances for Ben Olsen’s side this season, tying his total from last season. He joins a lengthy list of absentees ahead of the match, joining Ulises Segura, Kofi Opara, Nick DeLeon, and Chris Odoi-Atsem who are all listed as out.

D.C. are currently last in Major League Soccer, with only 10 points from their opening 12 matches. Their last victory came on May 19th in a 2-1 success at San Jose.