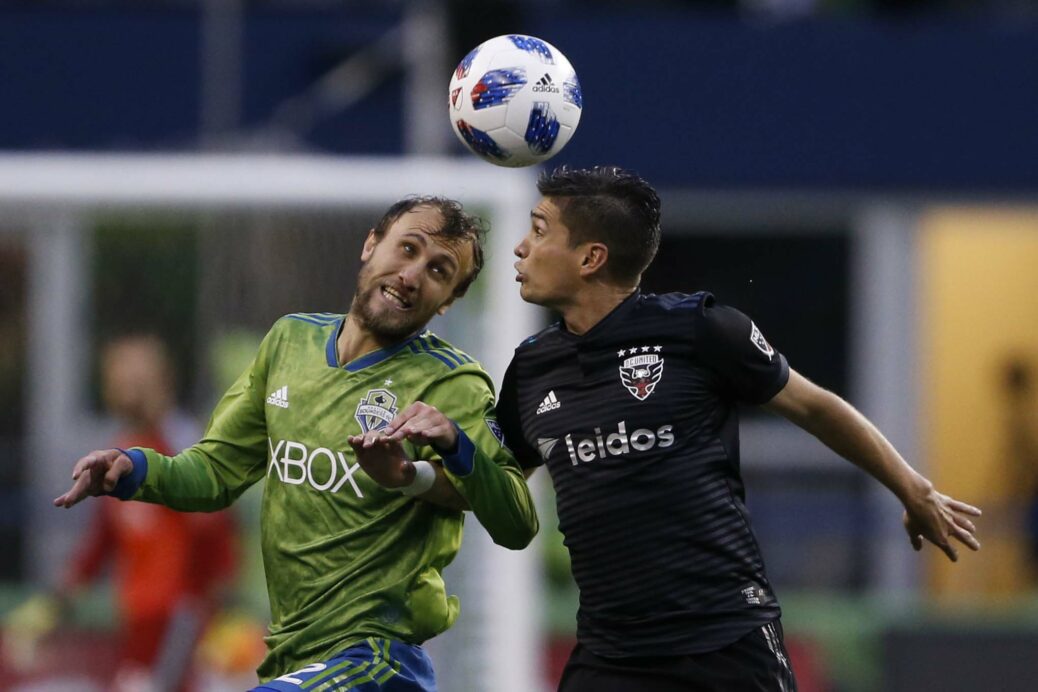 SEATTLE — Amazing what a little good health can do. Entering Saturday night’s match against D.C. United, every other team in MLS had scored at least twice as many goals as the Seattle Sounders (3-7-2, 11 points). But playing at some semblance of full strength for the first time in months, the Sounders found the back of the net twice and not coincidentally looked like something resembling a playoff team for the first time in recent memory.

Nicolas Lodeiro — back with the club just days after being left off the Uruguay World Cup squad — scored his first goal of the season in a 2-1, come from behind victory over the visitors. Making his first appearance since April due to a toe fracture and national team duty, Lodeiro struck a beauty of a goal, a thunderous left-footed volley from outside the penalty area that fizzed past goalkeeper David Ousted to even the score. The equalizer snapped a 363-minute scoreless drought for the hosts, tied for a club record.

Second-half substitute Magnus Wolff Eikrem headed home what would prove to be the game-winner in the 83rd minute, latching onto a Cristian Roldan cross and slapping a header off the damp FieldTurf and past Ousted for the 2-1 lead. It was the first goal in MLS for the Norwegian midfielder, who also scored a goal in CONCACAF Champions’ League.

“Some teams probably would have conceded even more and [D.C.] would have won the game,” said Eikrem. “But we came back and now we just have to keep going because it’s just one game, and I think there are many more wins.”

It is no coincidence that the goals came from Lodeiro, a Designated Player making just his fifth appearance of the season, and Eikrem, a Targeted Allocation Money signing who had struggled to find health, fitness, or form in earning fewer than 500 minutes across the Sounders’ first 10 league matches.

Whatever MLS is in 2018, it is not yet a league where a team can lose a slew of its more expensive players and realistically expect to compete. Missing U.S. international Jordan Morris for the year to a torn anterior cruciate ligament, the Sounders have also been without Lodeiro, Eikrem, Osvaldo Alonso, Victor Rodriguez, Gustav Svensson, Roman Torres, Kim Kee-Hee, and Will Bruin for parts of the season.

Lodeiro and Rodriguez started on Saturday, with Rodriguez making just his second appearance of the campaign as he recovers from knee surgery. Alonso took the field as a second-half substitute, making just his fifth appearance — and his first since May 5 — in a season thus far hampered by leg injuries. The impact the group made was impossible to miss for a Sounders team that entered the night riding a three-game losing streak and sitting near the bottom of the Western Conference standings.

Turns out possession doesn’t have to be dull or predictable, that passes can skip lines, unleash strikers, discomfit defenses. Rodriguez was stellar for the hour he was on the pitch, displaying vision and chutzpah to spare. Lodeiro had a team-leading 105 touches, completed 93 percent of his passes, equalized, and generally did Designated Player things all night.

“We wanted to get back to what we did last year,” said Sounders head coach Brian Schmetzer, “which was be a little bit better in possession. And there were times that we were. It’s still a work in progress. There were some times where we weren’t that great or we felt a little rushed.”

It was, in truth, far from a perfect outing. The hosts fell behind, at home, to the team with the worst record in the Eastern Conference. D.C. United (2-6-4, 9 points) threatened repeatedly on the counter attack. Goalkeeper Stefan Frei was called upon to deliver five saves, some far from routine. Clint Dempsey and his invaluable Designated Player tag have still delivered zero goals and just one assist in more than 600 minutes of action. And mere moments after Alonso checked in to provide the Sounders perhaps their strongest lineup of the season, right back Kelvin Leerdam — another TAM signing — exited with a hamstring injury.

Moreover, the Sounders are still last in the league in scoring, still sit 11 points out of the playoff spots. But the MLS season is a marathon, and maybe, just maybe, Saturday night was the start of a turnaround.

“You gotta start somewhere,” said Frei after the match.