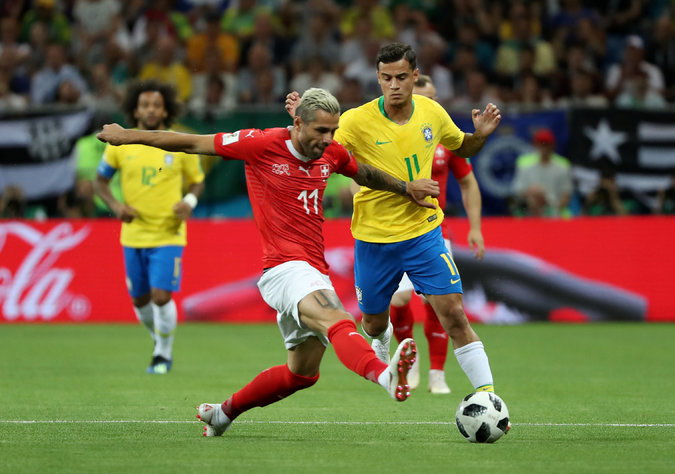 Friday’s slate of World Cup action in Russia sees a pair of Group E fixtures, with favorites Brazil looking to claim their first win of the tournament.

Tite’s side kick off the day’s entertainment as they face Costa Rica in St. Petersburg. Costa Rica also will look to claim their first win after a 1-0 loss to Serbia on Sunday.

Also in Group E, Switzerland will look to take the momentum from a draw against Brazil as they duke it out with group leaders Serbia. The sandwiched fixture comes from Volgograd as Nigeria battle Iceland.

Brazil’s hard work failed to end in a win on Sunday as Tite’s men settled for a 1-1 draw against Switzerland. Now it looks to be an uphill climb with Serbia leading Group E on three points.

Neymar will figure to play a huge role in Brazil’s attack after being frustrated against the Swiss. Barcelona midfielder Philippe Coutinho’s wonderstrike was huge for the Brazilians but overall they cannot afford any mental lapses.

Costa Rica fell to a wonderful free kick by Serbia’s Aleksandar Kolarov, and will look to bounce back. The Ticos will hope for more clinical offensive opportunities after only three shots on goal in their recent defeat. Marco Urena was important for Costa Rica, but expect playmaker Bryan Ruiz to be important in this match.

The middle match of the day sees two different styles of play clash in Volgograd. Nigeria fell 2-0 to Croatia on Saturday, where they were pressured frequently.

Playmakers Alex Iwobi and Victor Moses were very quiet, as the pair totaled zero shots on goal out of their six in total. Both speedsters will need to pick up their game to avoid being dropped from the starting lineup. Expect Nigeria to go with a two-striker front with Odion Ighalo and Kelechi Iheanacho getting the nod.

Iceland grabbed their first ever point at a World Cup in their 1-1 draw against Argentina. Alfred Finnbogasson’s finish canceled out Sergio Aguero’s opener while goalkeeper Hannes Thor Halldorsson was huge in the draw. Iceland will look to frustrate a lively Nigeria attacking front, but are always dangerous on the counter.

Kaliningrad plays host to the final match of the day with Serbia facing Switzerland in Group E play.

The Serbs were able to use Kolarov’s free-kick to victory as they downed the Ticos in their opener on Sunday. A talented attack is led by Lazio man Sergej Milinkovic-Savic who is being courted by several EPL sides. The 23-year-old will need to be strong again if Serbia want to advance into the knockout stages.

Switzerland held on for a point against Brazil, using a rigid defensive scheme to frustrate the numerous playmakers. Against Serbia they will be pressured by more so in the midfield, which will call for wingers Xherdan Shaqiri and Steven Zuber to up their game.

Zuber headed in the equalizing goal for the Swiss, while Shaqiri registered the assist. If they can get after it, the Swiss could very well pick up all three points against their tricky opponents.