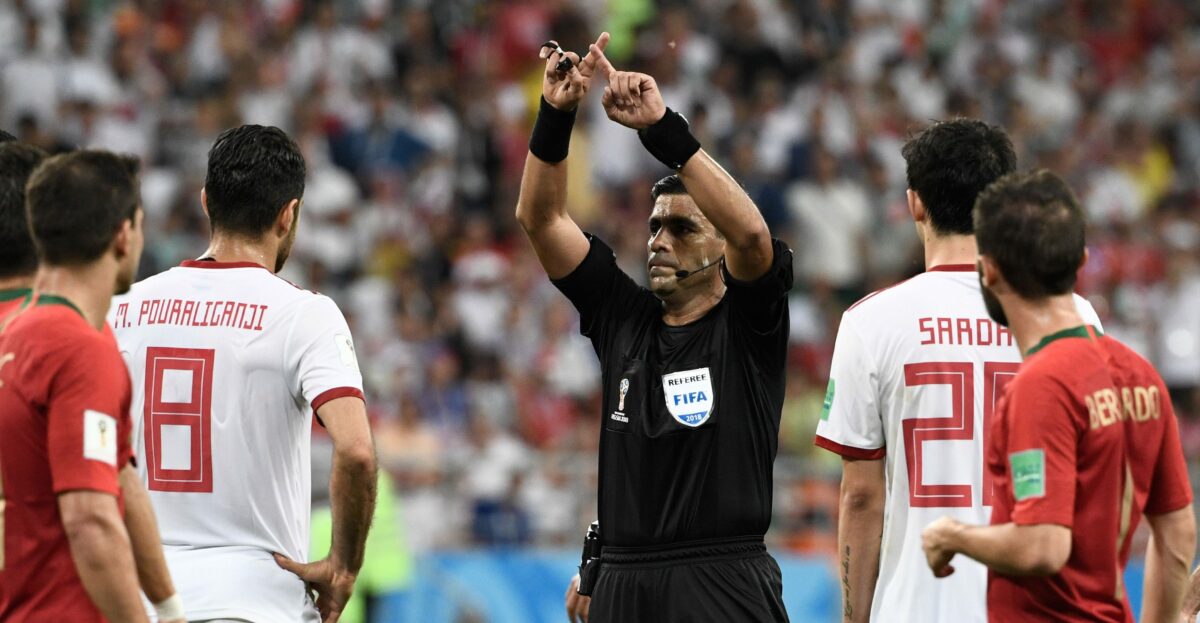 VAR’s overwhelming success at the 2018 FIFA World Cup was bound to come to and end at some point.

Unfortunately for the officials in charge of the matches in Russia, they were thrust into the spotlight during the pair of high-profile matches to end Group B.

The decisions made by the referees throughout Monday’s matches were questionable at best, and left plenty of players, coaches, and fans irate with how the technology was utilized.

Before we open up a full can of criticism, let’s give credit to the staff in charge of Spain’s 2-2 tie with Morocco that correctly reversed the offside call on Iago Aspas’ 91st-minute equalizer.

The late equalizer from the Spaniard leveled the contest at two goals apiece and eventually allowed Spain to advance to the Round of 16 as Group B champion, which means a knockout-round clash with Russia.

The opposite could be said about the handling of the decisions in Portugal’s 1-1 tie with Iran, where the course of the tournament could’ve changed.

Paraguayan referee Enrique Caceres and VAR Massimiliano Irrati of Italy set the tone for the decision-making process of the match in the 53rd minute, when a review allowed a soft penalty to Cristiano Ronaldo.

Ronaldo made contact with a pair of Iranian defenders, but a penalty wasn’t initially given by Caceres, who then awarded the spot kick, which was saved by Ali Beiranvand.

Although every decision isn’t linked with previous calls in the match, the officials should’ve kept a level of consistency when going to the monitor.

Iran had a second-half penalty shout ignored by the officiating crew, which incensed manager Carlos Queiroz and could’ve handed the Iranians an opportunity to equalize earlier than the 93rd minute.

VAR stepped into the forefront again, when Ronaldo made contact with the head of Morteza Pouraliganji.

In certain leagues across the globe, like Major League Soccer where contact to the face is a point of refereeing emphasis, the actions of the superstar could have resulted in a red card, a decision that would have suspended Ronaldo for Portugal’s Round-of-16 game.

Iran finally got a call to go in its favor in second-half stoppage time, when Cedric Soares’ arm made contact with the ball in the penalty area.

However, the process to get to the penalty call was elongated, as a delayed review pent up frustration on both ends of the touchline.

In past games, VAR decisions took a swift amount of time and didn’t wreck the rhythm of play on the field.

Caceres, Irrati, and the rest of the officials in the video review room in Moscow eventually came to the conclusion a penalty should be awarded to Iran, but the length of the review naturally brought up a load of skepticism that Caceres wasn’t sure which way to go with his call.

The same amount of criticism came with the Ronaldo incident, as some accused Caceres of using preferential treatment by letting one of the game’s stars off with a yellow card.

While it’s worth keeping in mind not every VAR decision is going to be the popular one, the process needs to be quicker, and it needs to eliminate as much doubt as possible.

In the case of the Portugal-Iran game, the choices to go to review took too long, and the time spent at the monitor by Caceres was too long.

Failing to keep consistency in which plays are reviewed hurt the officiating crew as well, as Iran felt its second-half penalty shout should’ve at least been checked after what it felt was a decision to review a softer call that led to Ronaldo’s spot kick.

Overall, VAR has been good for the game at the highest level, and it has caught fouls, especially in the penalty area, that the referee on the field may not see from his angle.

But there are going to be times during a game of consequence, like in Portugal-Iran, where the decisions fall under the umbrella of criticism and what-ifs pop up.

For the officials taking charge in the rest of the World Cup games, Monday’s Group B finale should be a case study into how not to handle VAR situations.

If Portugal-Iran serves as more of an outlier than a sign of things to come, VAR will leave the World Cup with more praise than skepticism.