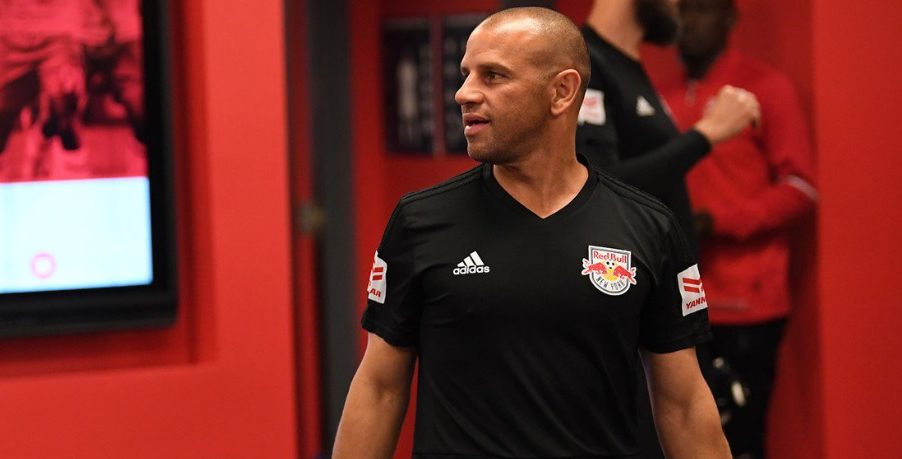 It was a seemingly hectic Friday for the New York Red Bulls, a club that has seen many of those. Jesse Marsch, the team’s longest-tenured head coach, officially left after months of speculation, with his next steps yet to be confirmed. Chris Armas, Marsch’s assistant coach for his three-and-a-half year stint, has taken his place for his first professional head coaching job. Yet, the Red Bulls players and new head coach showed very few signs of tumult.

Armas’s hiring is a sign of continuity from the Red Bulls, who have been working with their specific pressing style for several seasons now.

“I understand more than ever the philosophy, the tactics, the way we play, the personnel, the depth, USL, [and] academy,” Armas said at his introductory press conference. “I’ve invested myself completely in this club.”

That was the intention from the beginning.

“The most important part is having someone who understands how we play and how we do things because that’s not going to change,” sporting director Denis Hamlett said. “That made the decision so much easier.”

For the players, the sentiment is the same.

“Nothing changes here,” Bradley Wright-Phillips said. “The players do that every week. We all have different personalities. We’re not all intense, but when it comes to game day, we know what our job is and that won’t change.”

However, Armas and Marsch are not carbon copies of each other.

“Chris’s way is more relaxed,” Wright-Phillips said. “We all know Jesse’s intense and that gets the best out of us. … Chris gives you the other side where he’s relaxed. You go in feeling calm. Your job is clear and you know what kind of a man he is and that’s the effect he has on the players. Even when he takes a session where it’s calm or it’s not too much shouting or not too much anything.”

In some ways, the move has been a long time in the making. Armas and Hamlett have known each other for 20 years when Armas was a player and Hamlett was an assistant coach with the Fire.

“He just led by example,” Hamlett said, “and you could see his ability to sort of connect with people and bring them on board and get them to sort of push themselves to the next level.”

When it was Hamlett’s time to take the head coach job in Chicago 10 years later, he quickly made Armas one of his assistant coaches, though he had to leave after a year. “I figured, if I get him a chance to hire him again, it would be here in New York, so that day has come,” Hamlett said.

That did not mean Marsch’s big announcement was easy for the Red Bulls players and staff.

“It was definitely a bittersweet moment because when you think what Jesse has meant to this organization and what he’s meant to me personally, it’s tough to lose a guy like that,” captain Luis Robles said. “At the same time, what he’s doing is incredible for not only himself, but soccer in America, all right? It’s not often that a coach gets an opportunity one, that’s an American, two, go over and coach a club at that level.”

Armas in particular had a close relationship with Marsch, who was also his teammate in Chicago.

“We were both emotional about the whole thing,” Armas said. “It’s an incredible moment for each of us. … He only wished the greatest of support and told me that he’d be my biggest fan. He can wait to see me on the sideline.”

Though it is his first professional head coaching gig, he feels ready. “I’m always watching and learning and listening and picking up as much as I can,” Armas said about the coaches he has worked with over the last two decades. Marsch obviously made list, as did the likes of Bob Bradley, Bruce Arena, and Juan Carlos Osorio.

Now, Armas finally has a chance to put his learning to the test. “I’ve been preparing — it sounds, I don’t know, cliché — my whole life for this moment.”