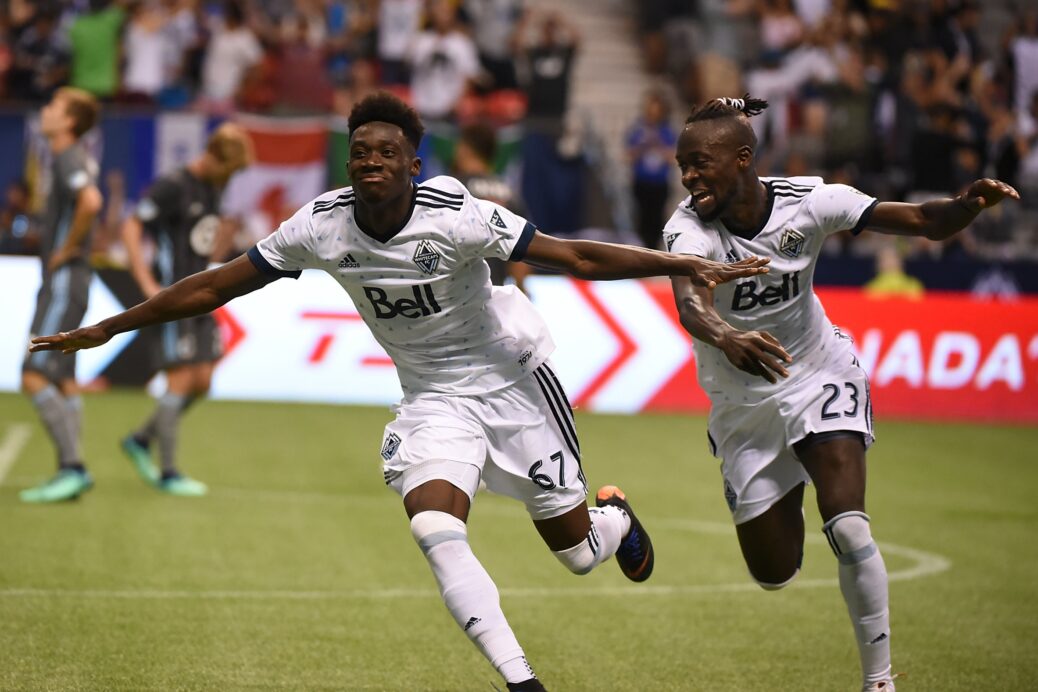 17-year-old Alphonso Davies has his move to European giants Bayern Munich but even with the flashing lights around him, Davies clearly remains focused with the Vancouver Whitecaps.

Davies’ incredible season continued on Saturday as he was a two-way performer in their much-needed victory. He scored the second and fourth goal in the Caps’ 4-2 success over Minnesota United while also assisting on his side’s other two goals. The victory helped Vancouver snap a two-match losing run while also helping them extended their current home winning streak to three matches.

“It was an amazing feeling, to get signed by Bayern but to also come out and help the team that took me in when I was little,” Davies said. “I was itching to get onto the field after two weeks off and I was able to take advantage of the opportunity. With all of the big news this week, I wanted tonight to be special. The team out with a good mentality and we were able to get the job done at home.”

Davies has certainly found his groove in his second full season with the Western Conference club, seeing his numbers increase dramatically. After only one assist in 27 appearances a year ago, the Ghanaian-born Canadian has five goals and eight assists now in 2018.

A pair of left-footed stunners by Davies helped the Caps, who were struggling for consistency in league play. Following a hard-fought performance midweek in their Canadian Championship semifinal second leg win over the Montreal Impact, the Caps looked dangerous in the offensive third all evening long.

“Everytime you get to play at home you get a little more buzzed than you normally would,” Davies said. ” It was pretty easy to get everything else out of my mind and just focus on football. I think to get good results you have to have fun and play happy and we did that tonight.”

“This year I’ve seen my confidence grow as a player and become more calm in matches,” Davies continued. “Everytime I get the ball I want to be positive and I think this season it’s reflected in my play.”

Vancouver has struggled at points of this season, and have been on the end of some hammerings as well. With Davies set to move on at the start of the new year, Saturday’s performance brought out some mixed emotions for head coach Carl Robinson.

“It was a mixed bag really, but overall a good football match,” Robinson said. “Lots of star attackers and offensive chances. We went up early, cruised to an even greater lead before we made things a little difficult for ourselves. Credit to the supporters who got behind us after it was 3-2 and we get a fourth goal on a bit of magic.”

“It was a six-pointer tonight, we have no problem scoring goals at home but we need to tidy things up defensively. Lack of concentration and set pieces hurt us on the two goals we allowed but overall I cannot say anything negative about the performance tonight.”

With his young prodigy still riding the high of his future move to Germany, Robinson knew he had to bring him back down for the good of the team. Davies’ performance showed why he was signed by the Bavarian powerhouse and he will hope to continue to play at that level for the rest of the season.

“I wanted to bring Davies back down a little and see how his performance would be,” Robinson continued. “He was good but he was a bit tired at the end, which comes from a break but overall he had a smile on his face. We know he has ability and potential but if he continues playing like he did tonight, that’s just reality.”