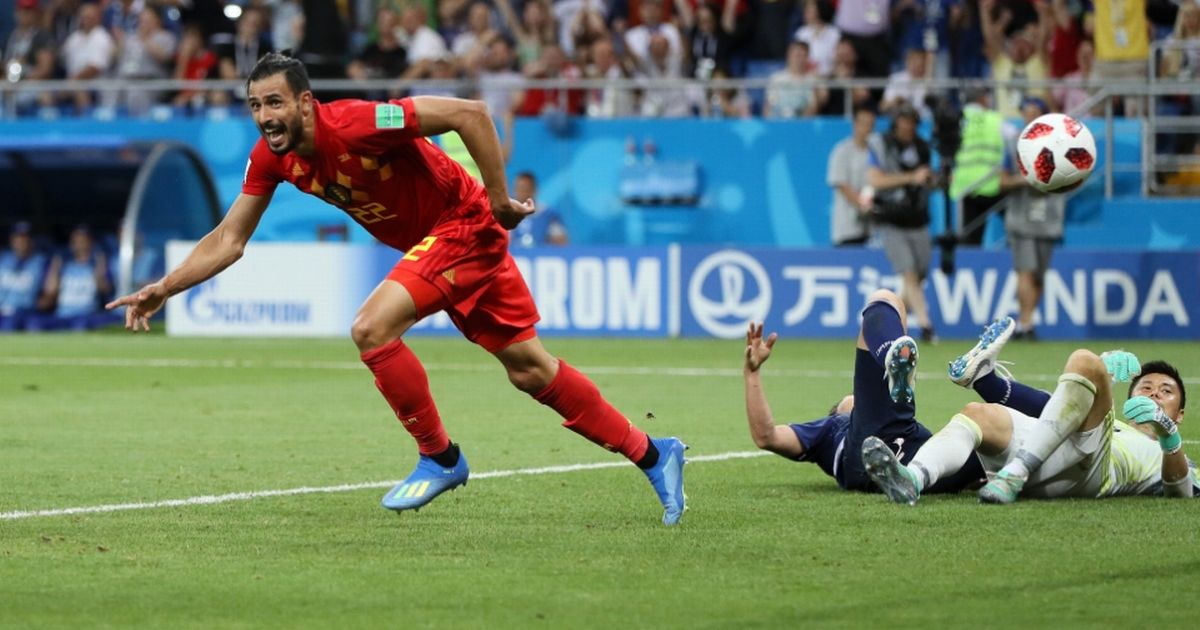 After 52 minutes of play, World Cup heavyweights Belgium were staring a shocking upset right in the face. In the final minutes, Roberto Martinez’s side flexed their muscles big time and turned around a two-goal deficit to defeat Japan, 3-2, in Rostov.

Substitute Nacer Chadli sealed the comeback for the Red Devils in the 94th minute, burying the game winner after a terrific counter attack. The West Brom man got on the end of Thomas Meunier’s cross and won the match for his side.

Genki Haraguchi opened things in the 48th minute as he beat Thibaut Courtois from a fast break. The midfielder received a pass and showed good composure to slot his right-footed effort into the bottom-left corner.

Minutes after Eden Hazard rattled the right post for Belgium, Japan added to their advantage through another talented midfielder. Takashi Inui’s right-footed blast from outside of the box beat Courtois to the bottom-right corner doubled Japan’s lead.

Jan Vertonghen began the comeback for Belgium in the 69th minute as he headed in from a corner kick. Marouane Fellaini leveled the match in the 74th as he replicated Vertonghens header with a similar goal of his own.

Courtois came up big with a strong save on Keisuke Honda’s free-kick in stoppage time before the Chelsea keeper began the final push. After catching a corner kick, Courtois’ roll-out pass to Kevin De Bruyne sprung the Manchester City man upfield. A perfect layoff by De Bruyne to Meunier down the right wing gave the PSG winger a chance to find a teammate in the box.

His cross was aimed to Romelu Lukaku but the striker dummied the cross and Chadli slotted into the goal. It was a heartbreaking loss for Japan who looked in control early in the second-half. Courtois made two saves in the win, as Belgium now faces Brazil in the quarterfinals later this week.

Chadli came off the bench and made a huge impact, scoring the winning goal. With a lot of talent on this Belgium roster, Chadli now has given Martinez an idea on who to start in the quarterfinals.

After keeping Honda out from a surprising free kick, Courtois sprung the game winning attack which certainly will go down in history.

Japanese striker Yuya Osako was huge this tournament for his side, but was quiet in their defeat. The 28-year-old had zero shots on goal and was shut down by a physical Belgium backline.