Dynamo battles back for dramatic point against LAFC 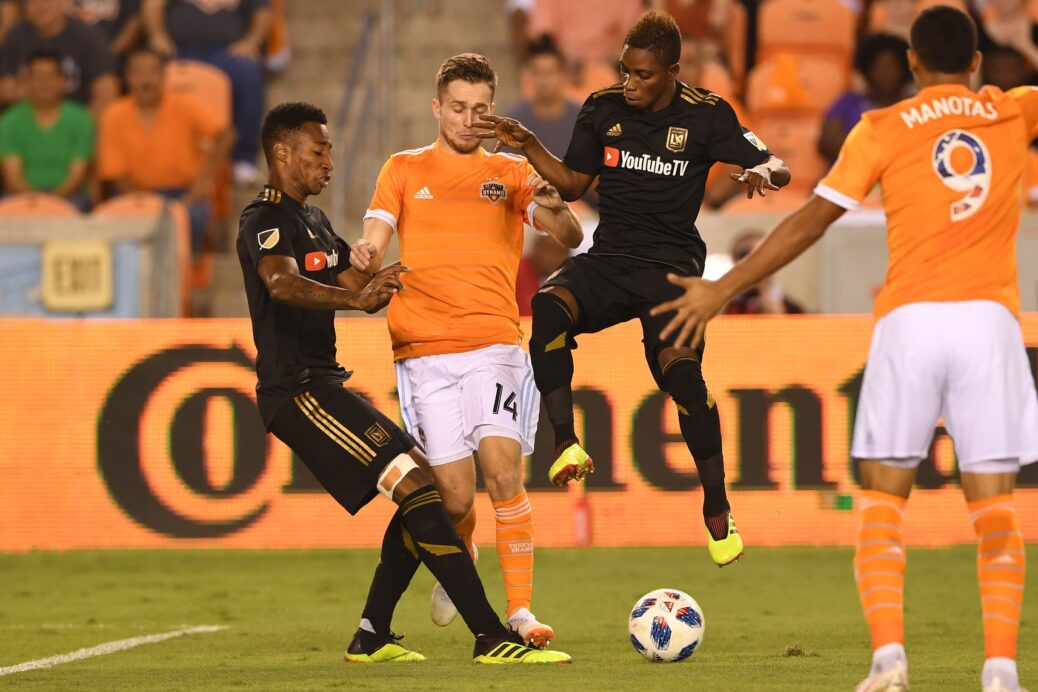 Many wondered whether or not Los Angeles FC would be a contender or pretender in its debut MLS season. Bob Bradley’s side has shown impressive signs, but swallowed a painful lesson on Tuesday night.

LAFC used strikes in each half at BBVA Compass Stadium for a two-goal lead against the Houston Dynamo, but a pair of stoppage-time goals helped the Dynamo equalize, forcing the visitors to settle for a 2-2 draw.

Latif Blessing netted his fourth goal of the season early for LAFC, sliding home Diomande’s through ball assist past Joe Willis in the fifth minute.

Houston didn’t force Tyler Miller into his first save until 51st minute when Mauro Manotas and Romell Quioto were each kept out. Philippe Senderos’ header in the 62nd minute kept Miller on his toes following a corner kick.

Blessing’s evening ended early as the winger left with a leg injury a minute later, being replaced by rookie Joao Moutinho.

Mark-Anthony Kaye bagged his second goal of the season in the 72nd minute, after the Canadian beat Willis with a composed finish. Diamonde’s through ball sliced the Dynamo backline allowing the midfielder to ice the result.

Miller’s outing was not done yet however as the former Seattle Sounder repelled Quioto’s long-range missile out in the 82nd minute. Senderos again had a good header on goal from the ensuing corner but the 26-year-old made his fifth save of the match.

It was heartbreak for LAFC (9-4-4) who looked in clear control to snatch the win. Bradley’s men return to action on July 7th at home against Orlando City.

As for Houston (6-6-4) they will be lucky to grab a point after being frustrated for majority of the match. Up next is a clash with Minnesota United also on the 7th.

Manotas gave the Dynamo life with a goal that came when a loss seemed inevitable.

Despite having a busy evening, Dynamo midfielder Tomas Martinez was silenced by LAFC’s midfielders. The 23-year-old eventually was subbed off in the second-half, failing to have a shot on goal or a single key pass.