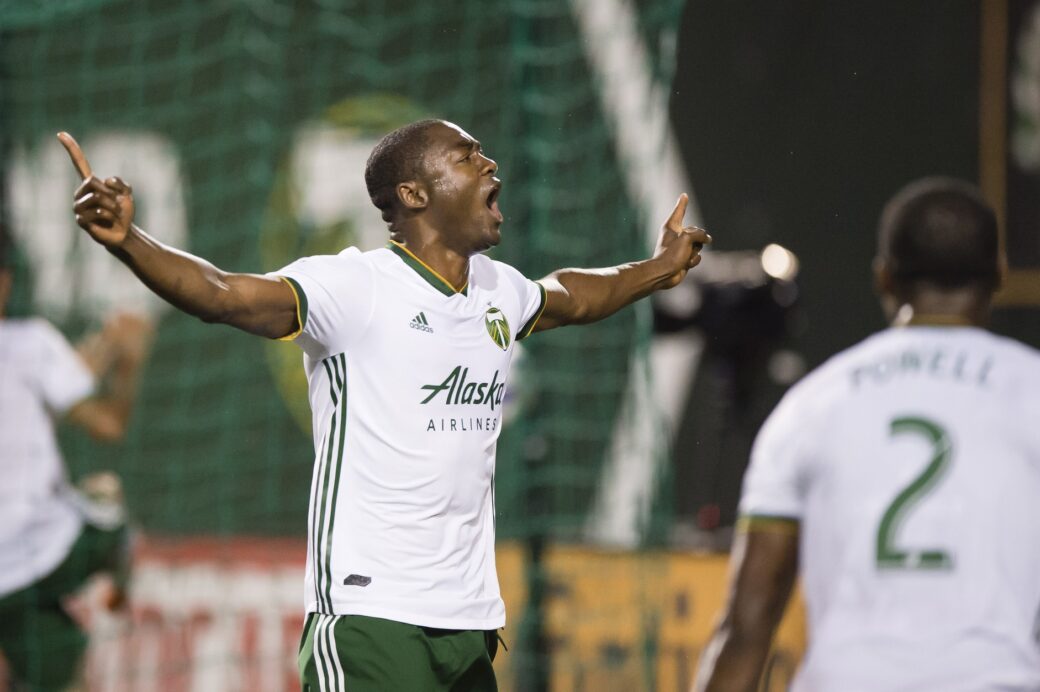 Fanendo Adi came to the Portland Timbers four years ago as a young, inexperienced striker looking to make his way in a new league. He now leaves the club as a well-rounded, physical striker, and he is taking a storybook ending with him.

The Nigerian reportedly requested a move away from the club last last week after seeing his role with the team decrease. Saturday’s match against the Houston Dynamo was his last game with the Timbers, and it ended with him scoring a game-winning goal in the final minutes of the match.

He arrived at the club on loan from FC Copenhagen in 2014 and made an immediate impact on the team. He scored nine goals in 18 starts during that first season on Oregon. He then went on to score 16 more in 2015, where he helped the Timbers win their first and only MLS Cup.

He departs Portland as the second leading scorer in their MLS history, trailing only Diego Valeri. Overall, Adi scored 54 goals in 126 appearances for the club, with Saturday’s winner standing as his final contribution.

The goal was the perfect way for him to end his tenure in Portland. In fact, it was so perfect that Timbers head coach Giovanni Savarese saw it coming well before kickoff.

“I told my wife before the game,” Savarese said. “I said ‘Adi is going to come in and he’s going to score. It’s going to be the perfect day for him and the team.’ You can sense it. You can feel it. He was ready. He wanted to come into the game and in the right moment he came in and gave us the victory.”

The premontitions of his coach, and the rest of his teammates, apparently, made the goal all the more emotional.

“I try not to cry, but today the tears were almost falling down,” Adi said after the game. “It was just amazing. He [Savarese] told me I was going to score. All the players told me I was going to score. It was just a great feeling to be on the pitch and compete and give my last effort to the team today. I’m just very happy and very pleased with the three points for the team. I couldn’t be more grateful.”

Adi is moving on the the next stage in his career, but he will always hold Portland as an important place in his development. The Nigerian spent more than four years with the club. He was 24 when he arrived and was not used to getting much playing time. Before coming to Portland he bounced around from Slovakia, to Ukraine, and to Denmark, where he never really caught on with any club.

“I came as a young boy, but now I’m a young man,” Adi said after Saturday’s match. “On the pitch I’ve learned a lot and out of the pitch, I’ve grown into a man.”

Adi has seen his role decrease this season. He’s lost playing time at striker. He’s only started nine games this season and is second choice up front to Samuel Armenteros. He requested a move late last week and general manager Gavin Wilkinson was able to accommodate him.

His next move hasn’t been made public yet, but reports indicate it could present himself a chance to grow with an MLS expansion team in Cincinnati. Even though that would put him on the opposite side of a match with the Timbers before too long, his first MLS club will always be a part of him.

“It comes a time in life when sometimes you move on,” he said, “but Portland Timbers is always going to be a family to me and I’m just grateful for everything I’ve gotten from the organization.”