Resurgent LA Galaxy have rallied back into playoff position 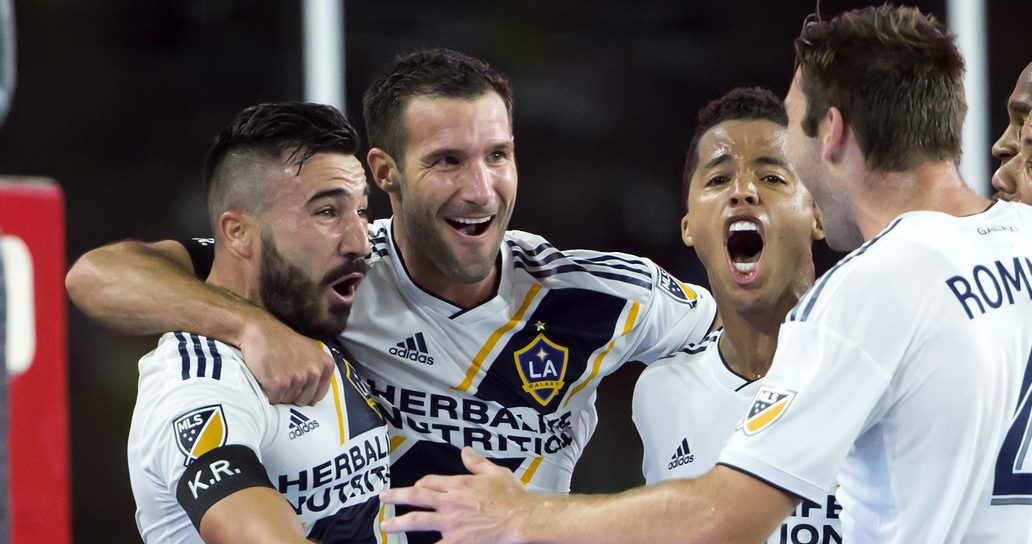 FOXBOROUGH, Mass. —This was supposed to be a bounce back year for the LA Galaxy after they missed the playoffs last year for the first time in nearly a decade, but their 2018 campaign got off to a rocky start after a four-game losing streak in April and May.

Although not quite a well-oiled machine yet, Sigi Schmid’s squad has rallied together to reel off a six-game unbeaten streak that has included wins over quality teams such as Real Salt Lake, the Columbus Crew and, on Saturday night, the New England Revolution.

Last weekend’s 3-2 victory over the Revs might be remembered as a turning point in the Galaxy’s season, as they traveled 3,000 miles northeast without talisman Zlatan Ibrahimovic and pulled off one of the great comebacks of this MLS season with a pair of stoppage time goals.

“Our fight’s been there,” Schmid said. “We haven’t given up on each other even through the tough times at the beginning of the year, and now we’re starting to get rewarded for it.”

With the victory, the Galaxy (8-7-4, 28 points) leapfrogged the Vancouver Whitecaps and Houston Dynamo in the standings to jump into sixth place in the Western Conference.

“At the end of the year, hopefully this is a big three points that puts us into a good spot,” said veteran midfielder Chris Pontius, who scored a brace, including the 93rd-minute winner. “Now we’ve got another tough road test in Philly, so we’ve got to go and do much of the same and hopefully manage the game a bit better than we did this one.”

The 31-year-old Pontius is one of 13 new players on the Galaxy roster this season, and he’s caught fire of late, registering either a goal or an assist in each of the last seven games to help spur on LA’s run of good form.

“We’ve been a lot tougher to play against than initially we were earlier in the year,” Pontius said. “In the stretch that we’ve put together, two of those ties we blew two-goal leads, so it could be even better than what it is right now, but we’re a work in progress. A lot of this team was brought in this year, but we need to start getting things to gel a bit better.”

“We’re starting to learn how to play with each other, that’s been the important thing,” Schmid agreed. “Obviously, we missed Zlatan today, because our game has been cut to him a little bit and he’s obviously had a big impact when you look at his goals. The guys are understanding how to play with him, so we had to adjust a little bit today.”

Schmid said Ibrahimovic —who has scored eight goals in his last five starts — would not play on turf field until the playoffs come around, and indeed the big Swede also sat out the season opener up at Vancouver’s BC Place, and played only 18 minutes in a road draw against the Portland Timbers in June.

The Galaxy perhaps shouldn’t have needed a late comeback on Saturday, after Revolution midfielder Cristian Penilla was red-carded in the 23rd minute. However the Revs seemed motivated to finish out their final home stand of the season with a victory, especially in front of a crowd of 36,573 that was easily the biggest of the season at “Fortress Foxboro.”

Trailing late, Dave Romney headed home a right side corner by Romain Alessandrini at the far post in the second minute of stoppage time, and then a minute later, centering ball from Alessandrini trickled through to Pontius in the box for the late stunner.

After squandering two-goal leads against the San Jose Earthquakes and D.C. United in the past two weeks, the Galaxy got some wind in their sails as they try to move up the table in the second half of the season.

“It’s big,” Romney said. “It’s nice to have stuff break our way this time. Hopefully, we can just keep building on it and keep these results going.”

“If we keep that pace up, we’re easily going to be in the playoffs and that’s definitely our goal,” Romney added.

A team with the talent level of the Galaxy should end up in the playoffs, especially now that the puzzle pieces are starting to fit together.