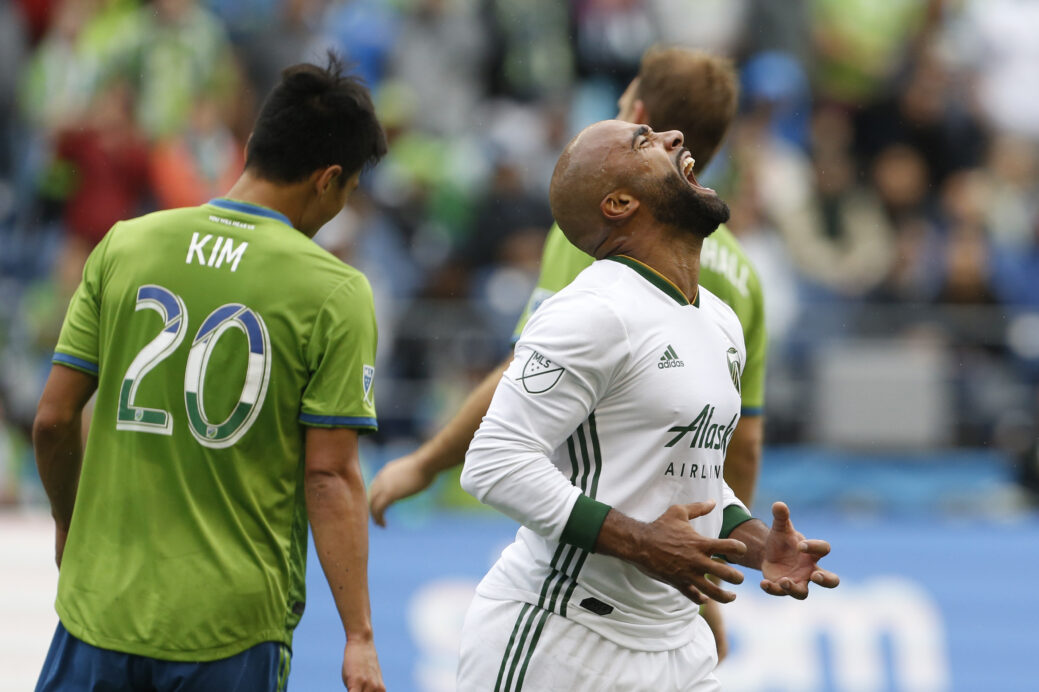 SEATTLE — It’s not supposed to rain in Seattle.

Not on the last day of June. Summers here defy belief — arid and azure mid-70s miracles, the best thing going in the continental U.S., and maybe its best-kept secret.

And Seattle Sounders fans don’t boo. Not much, anyway. Not unless Ricardo Salazar is on the field.

So maybe, come autumn, the sound of half-hearted heckles sprinkling down amid the late June rain at CenturyLink Field will seem a dream. Maybe this seemingly endless futility will once more play mere preamble to another pulse-quickening, history-defying race from the dregs of the Western Conference standings to an MLS Cup final.

Don’t bet on it — at least not with anything you can’t afford to lose.

In the 101st meeting of a rivalry spanning multiple leagues and parts of five decades, the Sounders fell 3-2 to the Portland Timbers before an announced crowd of 47,521 on Saturday afternoon.

The victory leaves the Timbers undefeated in 10 matches and ascendent in the standings. The Sounders, meanwhile, dropped to 3-9-3 and a mere point out of last place in the Western Conference.

Four of the Sounders’ next five matches are on the road, where they have posted a dismal 1-5-1 record thus far this season.

“The current state of affairs is not good,” acknowledged Schmetzer. “We have to be realistic; it’s not good. We’ve really put ourselves in a hole.”

A scoreless and predictably taut first 45 minutes gave way to a five goal,  knock-down, drag-out, sibling brawl of a second half, a gut-punch loss if ever there was. Twice the Timbers — who had neither won nor even led in 10 prior visits to CenturyLink Field — took the lead. Twice the Sounders replied within minutes.

Given the realities of the standings and the calendar, the story of the Sounders’ season seemed to rewrite itself in palimpsest every few moments, blood rivals pouring in five goals over the course of a chaotic, furiously contested 26 minutes.

But when Timbers center back Larrys Mabiala rose in the 78th minute to power home a corner kick header for the second time in less than half an hour, the hosts were left scrounging about for a third response they never could find.

Playmaking dynamo Diego Valeri assisted on all three Portland goals, while Mabiala notched his third and fourth goals of the season.

Mabiala opened the scoring in the 48th minute, too easily beating center back Kim Kee Hee to a Valeri corner kick and besting goalkeeper Bryan Meredith, who started for an injured Stefan Frei (concussion protocol).

It took just six minutes for the Timbers to respond on the counter attack through Samuel Armenteros, a turbo-boosted Tonka truck of a forward on loan from Serie A side Benevento Calcio.

Armenteros tracked down a 45-yard Valeri through ball and badly burned Sounders left back Waylon Francis before burying a left-footed shot past Meredith and into the far-side netting. A clumsy Sounders turnover — Clint Dempsey coughed up the ball mid-backheel as he collided with teammate Will Bruin — spoonfed the Timbers’ attack.

Chad Marshall equalized again for the Sounders 10 minutes later, slipping inside Mabiala and heading home a Lodeiro corner kick to tie the match at 2-2.

If it seemed enough, if it seemed the Sounders might even flip the script, sniff out a game-winner and walk away from this match spinning the narrative of a season restored, Mabiala would have his revenge, besting Marshall to a Valeri corner kick and putting the visitors up for good with barely more than 10 minutes to play.

The win moved the Timbers (7-3-5, 26 points) into fourth place in the Western Conference. The 2015 MLS Cup champions look as good under first-year manager Giovanni Savarese as they ever did under Caleb Porter.

A turnaround is certainly feasible for the Sounders. Newly inked Designated Player Raul Ruidiaz led Liga MX with 40 goals over the past two seasons and will be available in mid-July. Funds exist to secure at least one additional TAM-caliber reinforcement. And the club only recently began to look like anything remotely resembling a group of healthy professional athletes.

It’s easy to say it’s too late. They said it last year and the year before and were dead wrong. Maybe they’re wrong again.

Maybe. But this does feel different. Strange boos and stranger rains and all.