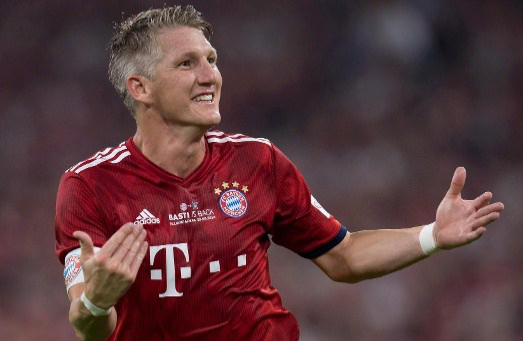 Bastian Schweinsteiger gave Bayern Munich fans one final night of magic as the German midfielder featured at the Allianz Arena on Tuesday.

The 33-year-old joined his current club, MLS’s Chicago Fire for a testimonial against the Bundesliga giants with Bayern running out 4-0 winners.

Schweinsteiger played the first-half for Chicago before taking hold of the Bayern midfield for the second-half. He would score a magnificent volley to finish off the scoring at his old home.

Serge Gnabry and James Rodriguez each netted goals for Bayern in the first-half which saw Bayern hold a 2-0 lead at halftime. Arjen Robben added a third in the second-half before Schweinsteiger called his own number for the fourth.

It was an emotional evening for both the midfielder and the many teammates he played with during his time at Bayern. Schweinsteiger joined Bayern’s youth academy at the age of 13 and made over 340+ appearances for the senior squad, winning eight Bundesliga titles and one UEFA Champions League crown.

He also played a short stint with Manchester United between 2015-17 before moving to MLS. Since joining the Fire, Schweinsteiger has made 45 appearances and scored seven goals.