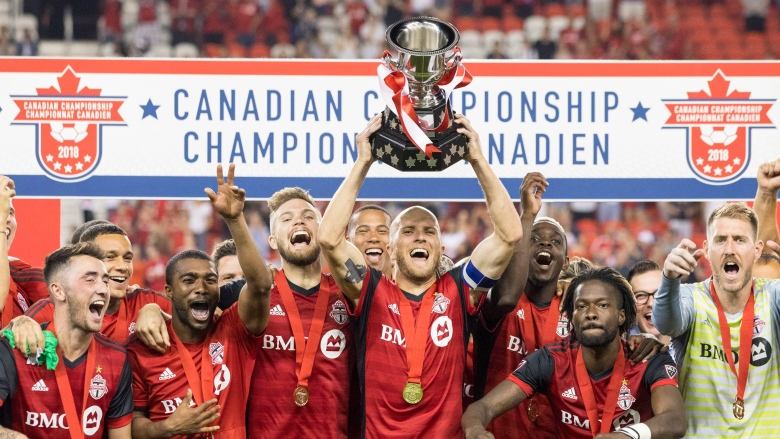 2018 has been a shocking season to say the least for defending MLS champs, Toronto FC.

Despite a deep run in the Concacaf Champions League, Greg Vanney’s team has been unable to replicate their league form from a season ago. Sitting 46 points back from their total haul from 2017, TFC needs a spark if they want to make the Eastern Conference playoffs.

That spark could very well be from Toronto’s Canadian Championship success on Wednesday evening, where they rolled past the Vancouver Whitecaps 5-2 in their second leg showdown at BMO Field. After grabbing a late equalizer in the first leg at BC Place a week ago, Vanney’s side was led by Jozy Altidore’s hat trick to snatch their third straight Voyageurs Cup.

“A big night for many reasons,” Vanney said postmatch. “It’s an event that we enjoy, our guys take a lot of pride in and it’s also a way for us to get to the Champions League for an opportunity to make another run.”

For the first time this season in all competitions, Toronto was able to score five goals in a match. It was the first time since a 4-4 draw against D.C. United where they tallied four. TFC flexed their muscles for one of the few times this season and reminded Major League Soccer fans everywhere that they can be competitive.

Jonathan Osorio, who scored three goals in the competition was named the tournament MVP, Sebastian Giovinco added a goal of his own, Tosaint Ricketts also got in on the action. Altidore, who has struggled with injuries most of the season, scored as many goals in 90 minutes of action on Wednesday as he has in the entire MLS season. Everything clicked for the team that many feared a season ago, but who will now look to use this championship as motivation.

“Tonight was a really important night in our season,” Vanney said. “League-wise, we haven’t been able to take off the way we would like to. That was one of the reasons tonight was even more important. It was a final, but it was also for us an important night to win a championship, get that back under out belt, to use it as a way to build confidence and momentum down this final stretch of 11 games.”

Eleven matches remain in the 2018 MLS regular season and TFC currently sits seven points back of sixth-place Montreal. Eight of those 11 are against sides currently in playoff positions, which will not make it any easier for the defending champs.

If Toronto wants a chance to defend their title, they will need to show that aggression and dominance which made them scary a season ago. Key veterans such as Michael Bradley, Alex Bono, Altidore, and Giovinco need to buckle down and lead by example. Several new faces have made impressions with TFC this season and have the talent to make an impact down the stretch.

Victor Vazquez and Osorio are talented midfielders that can run the show offensively. Marco Delgado’s versatility adds another element in the midfield, while the summer return of Justin Morrow adds another body in the backline. Gregory van der Wiel, Nick Hagglund, and Eriq Zavaleta will look to anchor a backline which has allowed 44 league goals up to now.

“If you don’t win this tournament, it’s another kick to the gut to a group that has had a lot of challenges to deal with this year,” Vanney said.

Toronto will hope their turnaround begins on Saturday night at slumping San Jose, before matches against Montreal and Portland close out the month of August. All three are winnable matches for Vanney’s side who has the talent to compete with anyone. After their steamrolling of the Whitecaps on Wednesday, TFC’s future is in their hands but could very well change yet again if they flip that switch on.