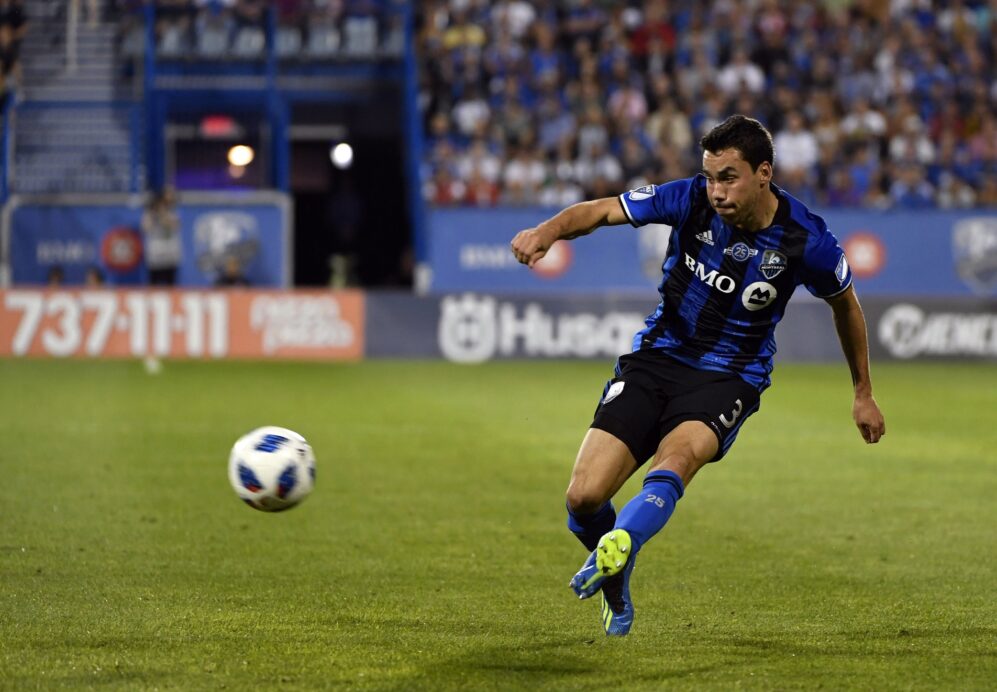 A few seconds before scoring the game-winning goal for the Montreal Impact, Daniel Lovitz was simply focusing on finishing the game.

The left back picked up a knock on his preferred left foot after being fouled by Michael de Leeuw in the 87th minute. The Impact had already used their three substitutions so Lovitz had to tough out the remaining minutes.

“I was a little stressed out for about 20 seconds, I couldn’t really feel anything and then I wiggled my toes and knew I’d be alright,” said Lovitz. “Then I knew it was just a matter of finishing the game and letting it get warm again.”

A few minutes later in stoppage time, Lovitz was standing outside the box on a corner kick situation. With the ball being headed out by a Fire defender, Lovitz stood in exactly the right place at the right time. He put his laces through the ball on the volley—using his right foot—and gave the Impact all three points with the first goal of his professional career.

“I discovered that he had a right foot,” said Impact head coach Remi Garde. “I’m really happy to have discovered that in these circumstances. I told him to clean his shoe and to frame it in his house.”

The sequence of events going from getting fouled to scoring the goal was what impressed Evan Bush the most.

“That was a pretty horrific tackle actually right before that and I didn’t even think he was gonna be able to finish the game the way he was limping around,” Bush said. “I guess it was a good thing it was his left foot because he scored with his right.”

“It was a big moment and he deserves it because he’s been a warrior for us.”

Lovitz worked hard to get to the position he currently has with the Impact. Signing with the Impact from Toronto FC, the Pennsylvania native had not played a regular role before. Having played as a forward and in the midfield, it was an injury to Ambroise Oyongo last year that brought Lovitz to the left back position.

Lovitz performed well on the back line and kept the position, eventually winning the team’s Defender of the Year award. This season under Garde, he continued on his stride and kept his spot as the Impact’s go-to left back.

“I knew it was a position that I needed a little bit of time to perfect and focus on it as a craft,” Lovitz said. “Unfortunately last year we got an injury but for me I was able to step in and get the most consistent playing time in one position in my career and since then I haven’t looked back.”

Garde understands that Lovitz’s past can help him become a better fullback. He believes that as a former forward, Lovitz can bring a lot to the team offensively from his position on the backline.

“He’s a very interesting player that allowed us to score goals, he has a lot of assists,” Garde said. “We work with him in order for him to improve offensively and also work well defensively.”

After five years of thinking to himself that a goal would come, it finally came through for Lovitz. From now until the Impact’s next game, he will be able to tell his coaches and teammates that his weak foot isn’t too weak after all.

“I knew that I had a right foot,” Lovitz said. “They didn’t know, I could respect that.”